A much-awaited rematch between Louisiana-Lafayette and Appalachian State must wait another two months.

The rematch of last year’s Sun Belt championship game scheduled for Wednesday night has been postponed due to COVID-19 concerns within the Appalachian State program due to positive tests and contract tracing.

“While we are disappointed that we will not be able to play Louisiana next week, we are prioritizing the health and safety of our team, our staff and the university community,” Appalachian State coach Shawn Clark said in a statement.

The game will instead be played either Dec. 4 or Dec. 5 in Boone, North Carolina. 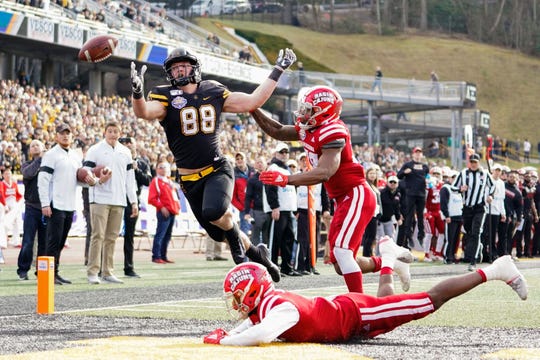 According to the university’s website, Appalachian State has 181 current active cases of COVID-19 among its student population and four employees currently infected as well; since March 27, it has had 604 cumulative cases among students, 30 among employees and 41 among subcontractors.

On Tuesday, Appalachian State chancellor Chancellor Sheri Everts announced that a student at the school who lived off-campus in Boone, Chad Dorrill, had died and that Dorrill’s “family has shared he had been diagnosed with COVID-19 earlier (in September) and suffered from later complications.”

WHAT TO WATCH: Five Week 5 games with the biggest impact on the playoff

“Obviously we’re certainly disappointed for our football program that we have to postpone this event,” Louisiana-Lafayette athletic director Bryan Maggard said. “But I completely understand. It’s something we knew could very well be a possibility from the beginning of the season.

“I think I’ve always said on the front end it’s going to be a plunky year for us, and I think this is just an example of that. But by all means we want to prioritize the health and safety of everybody involved, so, although disappointed, we absolutely understand and look forward to setting a date and time for the game to be played down the road.”

Louisiana-Lafayette coach Billy Napier did not seemed surprised by the postponement.

““I know it’s just part of the dynamic this year. … Certainly we were well-aware of some of the issues they had getting ready for the Campbell game,” he said. “You know that was pretty well-documented and public information. So, I think once we saw that we anticipated there may be more issues, and that is exactly what happened.”

Appalachian State defeater Campbell last Saturday when, according to the Winston-Salem Journal, the Mountaineers “were missing 20-plus players and four staff members because of active COVID-19 cases and resulting contact tracing.”

“The health and safety of our student-athletes and university community remain our top priorities as we continue to navigate the unprecedented effects of the coronavirus pandemic,” Appalachian State athletic director of Doug Gillin said in a statement.

“While we share in the disappointment of everyone who has worked hard to prepare for this football game,” he added, “we have known that there will be challenges to maintaining the athletics calendar.”

The Mountaineers have defeated Napier’s Cajuns four times over the past two seasons, including two times in the Sun Belt championship game.

Louisiana-Lafayette, now currently scheduled to play next at home against Coastal Carolina on Oct. 17, may look into moving up another of their games to Oct. 10, Maggard said.

“I think everything’s possible … to be honest with you,” Maggard said.

“We’ll start looking into something like that, potentially. … I think as we look at the rest of the season, from today moving forward, we need to take a look at the upcoming games and what, if any, availability could occur to move games around.”