Usually, by the time October arrives we have a pretty good idea how the race for the College Football Playoff is taking shape. As we all know, of course, there is nothing usual about 2020. So it is that as the calendar turns, many of the projected contenders have taken the field just once or maybe twice, and some will not do so for several weeks.

We should know a bit more after this weekend, however, as the heat gets turned up in the SEC, the No. 1 team returns to action, and the Big 12 favorites try to stay alive. Here are the five games with the most potential impact on the playoff picture.

This traditional rivalry usually takes place later in the year, but it is upon us quickly with both teams looking to stay in the top 10.

The Bulldogs’ offense took way too long to get in gear at Arkansas. Help might be on its way with QB JT Daniels now cleared for contact, but coach Kirby Smart stopped short of naming him the starter this week. Georgia would like to establish RB Zamir White first, but LB K.J. Britt and the Auburn front will have other ideas. Tigers QB Bo Nix delivered when needed in the opening win against Kentucky, with a lot of help from WR Seth Williams. But Nix’s completion rate continues to hover around the 60% mark, and S Richard LeCounte and the Bulldogs’ secondary want to make sure that number does not improve. 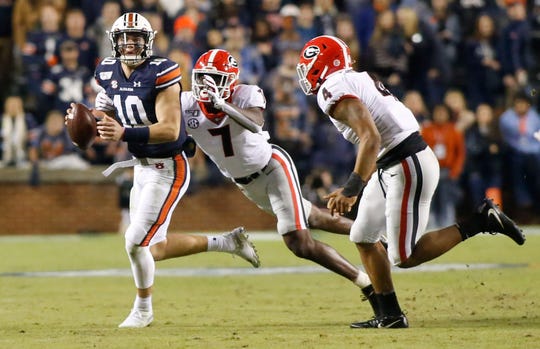 The Crimson Tide handled their SEC opener at Missouri without being threatened. The same cannot be said for the Aggies, whose triumph against Vanderbilt was in doubt well into the fourth quarter.

Alabama QB Mac Jones turned in a nearly mistake-free performance, making good use of WR Jaylen Waddle and RB Najee Harris. Aggies LB Buddy Johnson and S Leon O’Neal will lead the effort to keep the Tide’s numerous weapons from breaking loose. A&M QB Kellen Mond and RB Isaiah Spiller had moments last week but must get more consistent play from their blockers. That figures to be a challenge against the likes of Alabama LBs Dylan Moses and Christian Harris.

CONTROVERSY COMING: Why this year’s College Football Playoff will be messy

Virginia at No. 1 Clemson

The top-ranked Tigers return to league action after a week off in this rematch of last year’s ACC title game. The Cavaliers got into the win column at the expense of Duke in their 2020 debut last Saturday, but a 2-0 start will be a tall order.

Clemson QB Trevor Lawrence hasn’t exactly faced top-notched competition yet, but he has nevertheless done little to damage his Heisman campaign with a lofty 81.1 completion percentage. Having home run hitters in RB Travis Etienne and WR Amari Rodgers certainly helps, but LB Noah Taylor and the Cavs’ pass rushers will try to throw off their timing. U.Va. QB Brennan Armstrong debuted with a pair of scoring throws but also a pair of picks. He can’t afford any miscues against the Tigers, but DE Regan Upshaw and Co. will make that difficult.

The Longhorns’ late-game heroics to escape Texas Tech did little to instill confidence that they are playoff contenders. There will still be plenty of interest in next week’s rivalry showdown with Oklahoma, but they must handle the Horned Frogs first.

Texas QB Sam Ehlinger has already amassed 10 TD throws in two games, though he needed most of them in his last outing. The Horned Frogs’ defense, featuring LB Garret Wallow, isn’t afraid to bring pressure but can be susceptible to the big play. TCU started slowly in an opening loss to Iowa State, but the performance of QB Max Duggan after halftime was encouraging. He can expect some determined opposition from S Caden Sterns and the Longhorns’ secondary that will be eager to show improvement.

No. 16 Oklahoma at Iowa State

The Sooners, meanwhile, weren’t able to avoid disaster in last week’s meltdown against Kansas State and must get off the deck quickly in Ames. The Cyclones, who rebounded from a disappointing setback against Louisiana-Lafayette to win at TCU last week, will now try their luck against the reeling OU defense.

Oklahoma QB Spencer Rattler appeared to have matters in hand in a fast start but couldn’t deliver the knockout punch when things went awry. An inconsistent ground game didn’t help. Cyclones veteran LBs Mike Rose and Jake Hummel will try to keep it in check. ISU’s scoring defense numbers are a bit skewed due to the two special-teams TDs surrendered in the loss to the Ragin’ Cajuns, but QB Brock Purdy might still find himself needing to keep pace in a track meet. He and RB Breece Hall are more than capable of doing so, so S Delarrin Turner-Yell and his teammates in the Sooners’ secondary must redeem themselves with a complete game.