The truest test of your principles is what you’re willing to sacrifice for them.

It’s easy to say you’re against racism and bigotry, to proclaim your commitment with catchy slogans and moving demonstrations. But it’s what you do when those values are challenged that prove who really is in the fight and who’s in it for show.

The San Diego Loyal gave up any chance they had of making the playoffs Wednesday night, forfeiting a game the minor league soccer team was winning after one of its players said he was called a homophobic slur. This after another Loyal player was racially abused in a game just last week.

“They were very clear in that moment that they were giving up all hopes of making the playoffs, even though they were beating one of the best teams in the league. Handily,” Loyal manager Landon Donovan said afterward.

“But they said it doesn’t matter. There’s things more important in life, and we have to stick up for what we believe in and they made the decision to walk off.”

As should other teams when confronted with hate in the future. 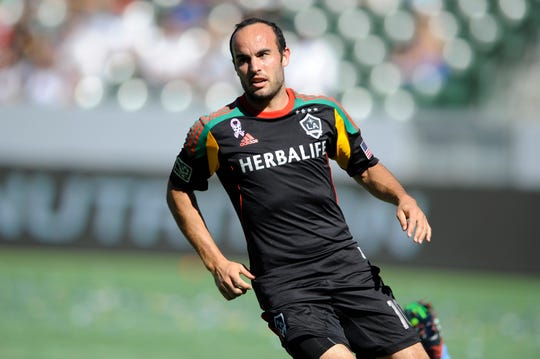 Leaders of all sports have decried racism and bigotry, and yet it continues to taint the playing fields. It’s a particular struggle in soccer, where Black players in Europe are routinely subjected to abuse and fans of Mexico’s men’s national team deride opposing goalkeepers with a homophobic chant.

Promises to be more inclusive mean nothing when those with the ability to influence brush these kinds of episodes off as just part of the game.

“Come on, man, don’t make a big scene,” Phoenix Rising coach Rick Schantz told Donovan after the game was stopped just before halftime when the Loyal’s Collin Martin, who is openly gay, said Phoenix’s Junior Flemmings had called him a Jamaican slur for a gay man. Flemmings, who is Jamaican, denied using the slur, while several Loyal players backed Martin.

“They’re competing,” Schantz said. “How long have you been playing soccer?”

As if that makes it OK.

The referee said he couldn’t eject Flemmings because he didn’t know what the term meant, and Schantz refused Donovan’s request that he bench Flemmings. That left the Loyal with a choice, one that wasn’t really a choice at all.

The Loyal drew praise last week for saying they would not count the point they earned for their 1-1 draw with the Los Angeles Galaxy II, in protest of Omar Ontiveros calling San Diego defender Elijah Martin a racial slur. Ontiveros was cut by the Galaxy and suspended by the league.

Looking back on it, though, Donovan said he and his players wished they’d done something in the moment.

And they promised themselves that if they were ever put in that position again, they would.

“If we want to be true to who we are as a club, we have to speak and we have to act,” Donovan said.

But they shouldn’t be the only ones.

If leagues are truly serious about ridding sports of hate, there need to be real consequences that will deter the bigots. If Mexico is forced to forfeit a qualifier for the men’s World Cup, El Tri’s fans might keep their mouths shut. If a team misses the playoffs, or winds up relegated, players might think twice about the ways in which they taunt opponents.

“We’re very proud and supportive of San Diego Loyal for taking a stand,” the USL said in a statement Thursday. “It’s also clear to us that the current disciplinary measures in place to combat abusive language are not serving as an effective deterrent, so we’re working now – alongside the USL Player’s Association and the USL Black Players Alliance – to put more severe repercussions in place going forward.”

The USL is still reviewing what happened Wednesday night, and is looking at the results of San Diego’s last two matches. It also will make comprehensive sensitivity training mandatory for everyone in the league prior to the 2021 season.

By walking off the field, the Loyal generated far more attention than they would have with a statement or a Tweet criticizing homophobia. This wasn’t a publicity stunt, however.

Donovan doesn’t need to bolster his reputation, with either the soccer or the LGBTQ community. He is one of the best players the United States has ever produced, and has a long history of being an ally. It would have been better for his players, both in terms of exposure and experience, to make the playoffs in the team’s first season.

But no game is worth winning if it means losing your integrity.