In what could be the NFL’s first significant in-season test of its coronavirus protocols, the Tennessee Titans announced Tuesday they would not be holding in-person activities after the team had eight total positive COVID-19 tests — three from players, five from staff —in the aftermath of Sunday’s game against the Minnesota Vikings.

“Out of the abundance of caution, the organization has decided to work remotely today as we follow NFL protocols related to the COVID-19 virus,” the team said in a statement. “Several tests have come back positive and [we] are working through the process of confirming them. We will have more information tomorrow.”

NFL Commissioner Roger Goodell said in a statement the positive tests came back Tuesday morning. The Vikings also are suspending team activities as both clubs follow the league’s protocols on COVID-19. 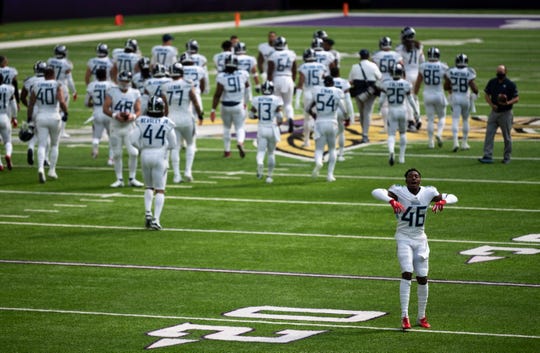 Joshua Kalu #46 of the Tennessee Titans and his teammates take the field before the game against the Minnesota Vikings at U.S. Bank Stadium on September 27, 2020 in Minneapolis, Minnesota. (Photo: Stephen Maturen, Getty Images)

“Both clubs are working closely with the NFL and the [NFL Players Association], including our infectious disease experts, to evaluate close contacts, perform additional testing and monitor developments,” Goodell said. “All decisions will be made with health and safety as our primary consideration. We will continue to share updates as more information becomes available.”

The Titans have shut down their facility until at least Saturday, a person with knowledge of the decision told the USA TODAY Network. The person spoke on condition of anonymity due to the sensitivity of the situation. The Vikings also are closing their facility, NFL Network reported.

Titans coach Mike Vrabel said Monday that outside linebackers coach and defensive playcaller Shane Bowen did not travel with the team for Sunday’s game due to the league’s COVID-19 protocol.

From Sept. 13-19, the NFL reported zero positive confirmed tests for COVID-19 among players. The league has not yet released figures for any more recent dates.

The Titans are scheduled to play at home against the Pittsburgh Steelers on Sunday, which was set to mark the first time this season the team would welcome fans to a game. Nissan Stadium was set to allow up to 10% of capacity — roughly 6,900 fans — for the contests, Nashville Mayor John Cooper and team officials announced in September. It is unclear whether the tests will alter the organization’s plans.

The Vikings, meanwhile, are scheduled to play on the road Sunday against the Houston Texans.

The Tennessean, part of the USA TODAY Network, contributed to this report.