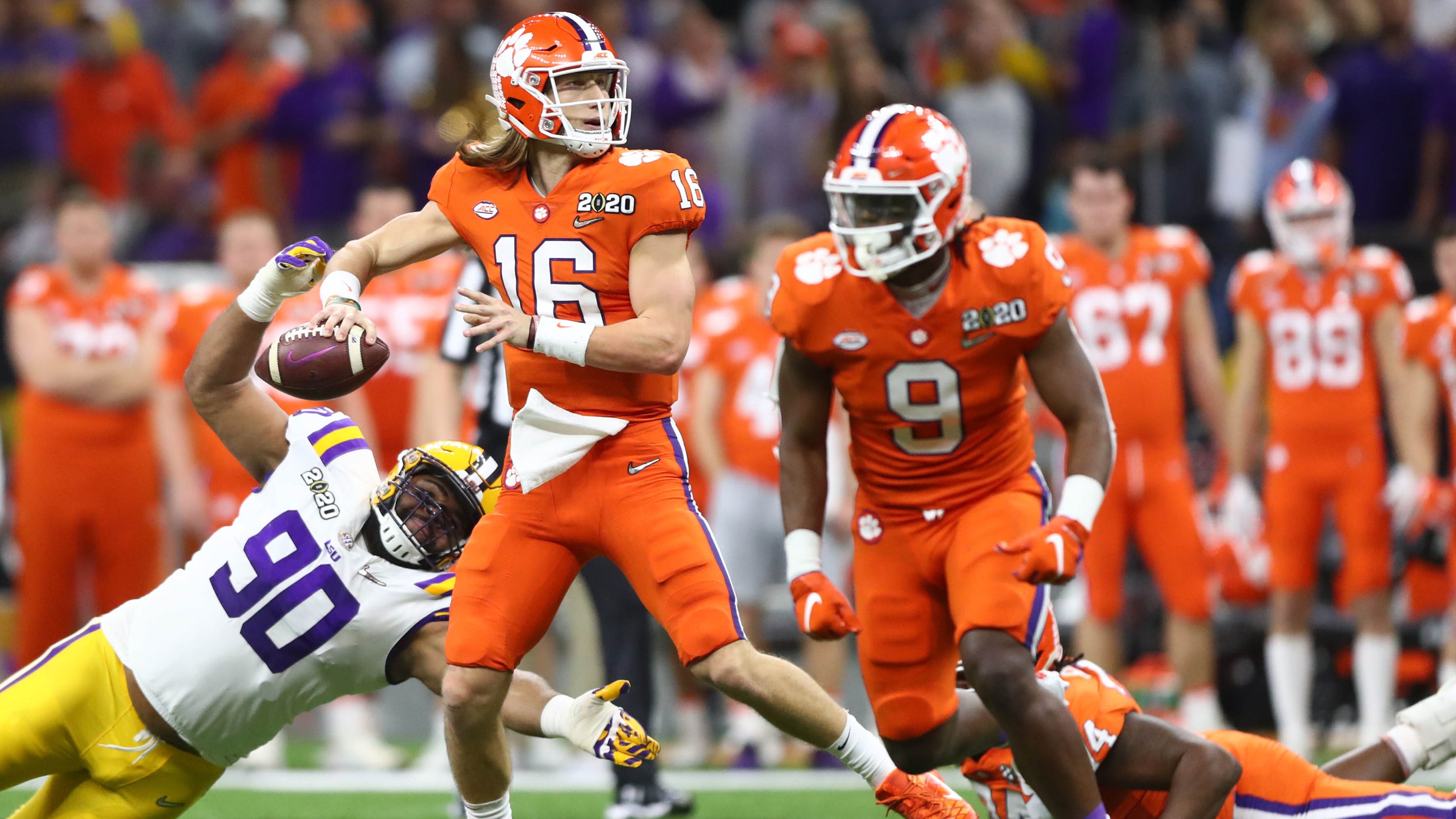 CLEMSON, S.C. — For Trevor Lawrence, it’s all about perspective.

“I feel like through my two years I’ve been through about every different situation you could be in,” Lawrence said. “So I’ve gained more and more perspective.”

As Clemson’s junior quarterback prepares to embark on his third and likely final season of what already has been a record-breaking career, he’s also driven by a renewed sense of excitement. He’s projected to be the No. 1 selection in the 2021 NFL draft, but he’d first like to make amends after capping his sophomore season with the first defeat of his college career.

The Tigers’ 42-25 loss to LSU in the College Football Playoff national championship game in January represented the first setback in Lawrence’s 26 games as the team’s starting quarterback.

“I haven’t gone through much adversity here,” Lawrence said. “That was the only game I’ve lost since I’ve been here, but it makes you want to go back and work even harder.”

Lawrence’s subpar performance in that game — he completed 18 of 37 attempts for 234 yards and no touchdowns — has been readily acknowledged.

“At the end of the day, I just didn’t play well enough for us to win,” Lawrence said. “Too many missed plays by me. I missed a lot of receivers. It just wasn’t my night.”

It might not have been Lawrence’s night, but here comes that perspective again.

“You’ve got to look back on what you’ve done — we’ve done some great things and we’ve got a lot more in store, for sure,” Lawrence said. “It sucks not getting to finish the way you wanted to, but we’re going to be fine. We’re going to be back.”

The only team in the nation to compete in each of the last five College Football Playoffs, Clemson indeed is a good bet to be back. The Tigers are No. 1 in the preseason Amway Coaches Poll for the second consecutive season. They start as an overwhelming favorite to capture their sixth consecutive Atlantic Coast Conference title, due largely to the presence of Lawrence.

“This is a great opportunity for him to lead and respond,” Clemson coach Dabo Swinney said. “He’s had unbelievable success and done so many great things. He’s going to be a hard guy to beat – forever. He’s special.”

“His demeanor is the same every single day, and I think that makes him special,” Elliott said. “He has confidence and inspiration in his work, and I think that’s why he performs at a high level. The great ones that have come through here — when you start talking about the great ones like Sammy Watkins and Deshaun (Watson) — they had that same demeanor about themselves.”

It seems like just yesterday that the flaxen-haired wunderkind strolled onto campus and mounted an immediate threat to incumbent quarterback Kelly Bryant, who had guided Clemson to 11 victories in 2017.

Lawrence was named the starter in the season’s fifth game in 2018 and never looked back, leading the Tigers to victory in 10 consecutive games, culminating with a 44-16 victory against Alabama that made him the first freshman since 1985 to guide his team to a national title.

Although he’ll enter the 2020 season with 66 career touchdown passes against only 12 interceptions, last season the man with the golden arm also flashed surprising ability with his legs. He rushed for 563 yards and nine touchdowns, including a memorable 67-yard scoring jaunt in a Fiesta Bowl victory against Ohio State that sent a message to future opponents that there’s more to Lawrence’s game than airing it out.

Lawrence will be without wide receiver Justyn Ross, who was slated to be the Tigers’ top returning pass catcher before having season-ending surgery on his neck in June, but Clemson is far from bereft of receiving talent what with players like Amari Rodgers, Joseph Ngata, Frank Ladson and highly regarded freshman E.J. William.

Then again, Lawrence might opt to simply hand the ball to 1,600-yard rusher Travis Etienne, who eschewed the NFL to return for a senior season.

“It all starts over,” Lawrence said. “I’m ready to get back with this new team and start building something. You have to work to get where you want to go.

“We’re proud of what we did last year — it just stinks the way it ended. But it’s almost easier to come back after you lose that game. That sting that we felt in the loss gives us an extra edge. We don’t want to leave anything on the table like we did last year.”

While that defeat has been the driving force behind Lawrence’s offseason workouts, he’s also exhibited a mature perspective concerning the coronavirus pandemic as well as recent racial unrest across America.

Lawrence has addressed both of those real-world issues head-on, launching a fundraising campaign in March to assist people suffering from COVID-19, then exhibiting his social awareness by helping organize a demonstration for racial justice on Clemson’s campus on June 13.

He was among four Clemson players who addressed a crowd of 3,000.

“The past few weeks I’ve been uncomfortable,” Lawrence said. “That word uncomfortable will be an important one in all of our steps in our journey to being equal. I’ve learned that every truly good thing in life comes from being brave and stepping into the uncomfortable. It’s uncomfortable to set aside everything I know about America and listen to someone else’s perspective.

“Recently I’ve realized that the America that I experience is different from the America that my brothers and sisters experience. I’m on the journey now of discovering how I can use my voice, platform and influence to lift others up and stand for those who shouldn’t have to stand alone.

“The world for generations to come will be different, will be better.”