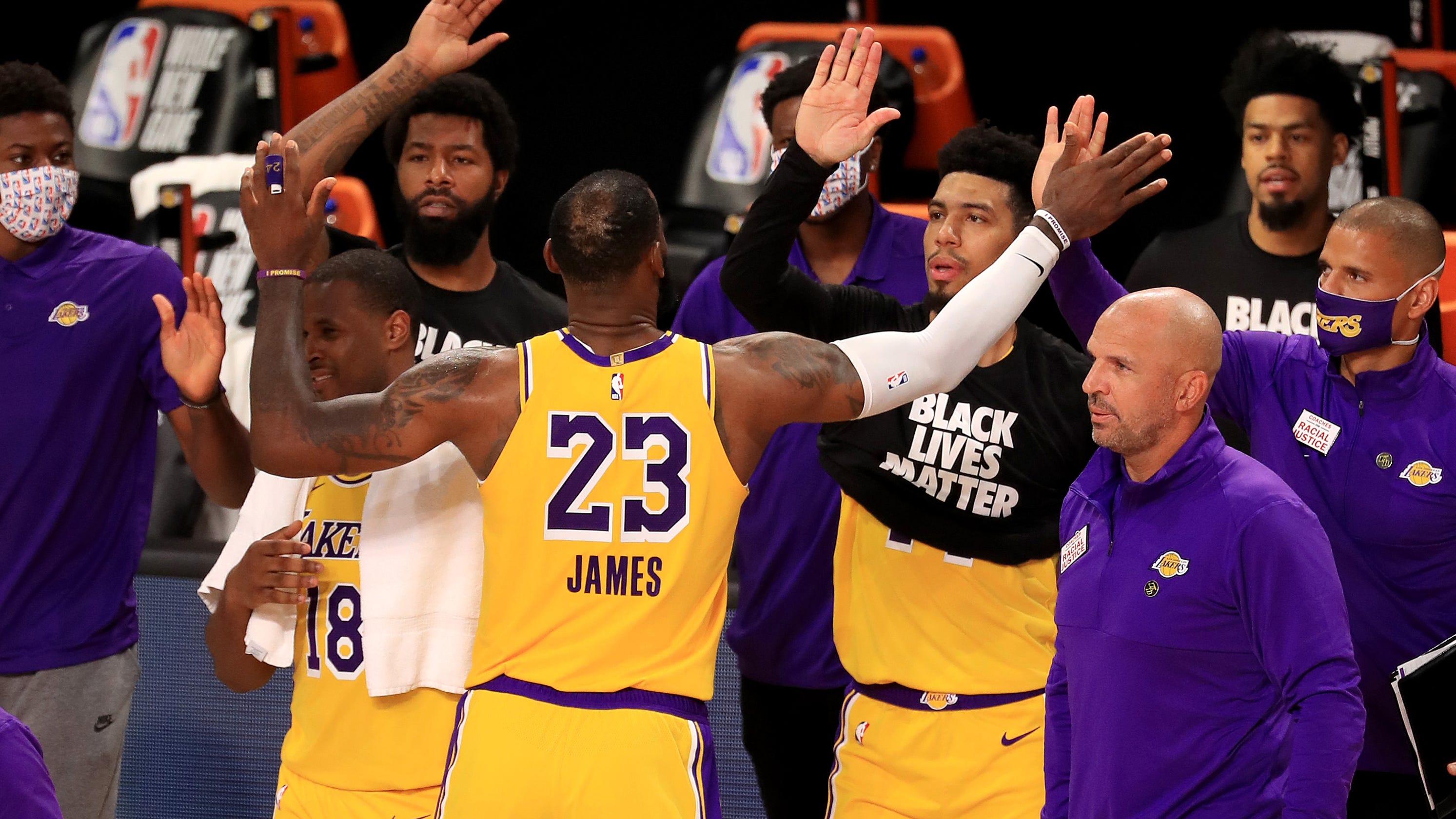 The NBA season has been back for a full week and there have been plenty of surprises to shake up the playoff picture, including the Indiana Pacers and Phoenix Suns going 3-0 while title contenders the Los Angeles Clippers and Milwaukee Bucks have gone 1-3.

Four months since the league shut down due to the coronavirus pandemic, the season reboot isn’t short on story lines.

As some teams get players back at full-strength after injuries while others look to rekindle their 2019-20 rhythm, our experts give their perspective after Week 1 of the restart.

USA TODAY Sports’ Jeff Zillgitt, Mark Medina, Scott Gleeson and Matt Eppers voted on the NBA power rankings (based on the entirety of 2019-20, not just the revamped schedule games):

1. Los Angeles Lakers.LeBron James is on a quest for his fourth title and his game-winner against the Clippers in the re-opener punctuates that hunger. But the key for this championship push will likely be Anthony Davis, whose 42 points Monday helped the Lakers sink the Jazz. All the ammunition is there, star power-wise, but the role players will be pivotal in the pursuit of the Larry O’Brien trophy as the West’s No. 1 seed.

July 30: LeBron James and the Lakers celebrate after edging the Clippers in their opening game of the season restart. (Photo: Pool photo via USA TODAY Sports)

2. Milwaukee Bucks. Giannis Antetokounmpo and Co. remain the favorite to come out of the East, and statistically this was the best team in the league entering the restart – leading the NBA in net rating and defensive rating. The 1-3 start to the new games just shows there’s kinks to be worked out to get back to their A-game.

3. Toronto Raptors. A veteran-laden roster with championship experience gives this team an edge nearing the postseason. Serge Ibaka and Pascal Siakam head a rested frontcourt while the backcourt tandem of Kyle Lowry (33 points Aug. 1 vs. Lakers) and Fred VanVleet (36 points Monday vs. Miami) continues to be a major threat. Even with Kawhi Leonard gone, Toronto is showing championship flashes.

4. Los Angeles Clippers. Lou Williams missed early games during his 10-day quarantine following a strip club fiasco. But a playoff-seasoned coach in Doc Rivers, the reigning Finals MVP in Leonard and a star like Paul George with takeover abilities make a winning recipe.

5. Houston Rockets. With James Harden and Russell Westbrook healthy, the Rockets have the most fearsome backcourt in the game. The question entering the restart was whether coach Mike D’Antoni’s small-ball style can manage a deep run. Based on high-scoring wins over the Mavericks and Bucks, the answer is an astounding yes – offensively – and maybe – defensively.

6. Boston Celtics. Jayson Tatum (34 points in a win over Portland on Sunday) gives coach Brad Stevens a youthful star poised for a playoff outburst, while a healthy Kemba Walker can lead this team at full strength. It just might take some time to gel chemistry-wise. .

7. Denver Nuggets. Michael Porter Jr. spearheaded an overtime win over the Thunder with 37 points, and he could be the most important player on this team not named Nikola Jokic, who is the superstar capable of carrying the Nuggets.

8. Miami Heat. Coach Erik Spoelstra has perhaps the deepest team coming into the restart and it showed in wins over the Celtics and Nuggets. Jimmy Butler has a track record of strong playoff performances, while young All-Star big man Bam Adebayo is a good complement. The X-Factor for this team is Tyler Herro, who hardly looks like a rookie here in August.

9. Oklahoma City Thunder. The surprise team of 2019-20 shouldn’t have been off anyone’s radar heading into the restart. That remains the case behind the three-headed backcourt monster of Chris Paul, Shai Gilgeous-Alexander and Dennis Schroder.

10. Indiana Pacers. Despite Domantas Sabonis missing time, the Pacers have been the surprise team of the restart by tallying big wins over the Magic, Wizards and 76ers T.J. Warren has been the breakout star with three consecutive 30-point games in those victories highlighted by a 53-point outburst vs. Philadelphia.

11. Philadelphia 76ers. Point-forward Ben Simmons and big man Joel Embiid have grown enough as co-stars to turn the Sixers into contenders in the East, but this team hasn’t looked good enough to reach the Conference Finals in the early stages of the restart. And now, Simmons is day-to-day with a knee injury.

12. Dallas Mavericks. Luka Doncic has shown his MVP-caliber self, but the Mavs have struggled to close out games early on in the restart, which could foreshadow an  inability to escape the first round of the playoffs. If Doncic can show more of his top form late, and get more assistance from sidekick Kristaps Porzingis, a Western Conference upset isn’t out of reach.

13. Utah Jazz. The narrative between stars Rudy Gobert and Donovan Mitchell  overshadowed how good this Utah team really is when at full strength. It will take an effort by committee and less reliance on Mitchell for this team to escape the first round of the playoffs, though.

14. Portland Trail Blazers. The Blazers are well positioned to be the darkhorse of the restart. It helps having Jusuf Nurkic and Zach Collins back, and that gives Portland a whole new outlook – one in which Damian Lillard doesn’t have to score 40-plus points a night to secure wins. Carmelo Anthony can be an X factor for this team in crunch-time situations.

15. New Orleans Pelicans. When Zion Williamson is in full force, New Orleans shows a strong chance of turning into a Western Conference playoff team. But his time limitation dampened momentum in the restart. The supporting pieces are in place with Brandon Ingram as an All-Star, Lonzo Ball throwing alley-oops and JJ Redick making threes, but this team needs to stop underachieving.

16. Memphis Grizzlies. Likely Rookie of the Year Ja Morant is the face of this up-and-coming team, but Jaren Jackson Jr.’s season-ending injury makes this team look completely different now, in a bad way.

17. Phoenix Suns. Devin Booker’s game-winning jump shot to sink the Clippers encapsulates the energy this youthful team is bringing to the restart. Deandre Ayton has a chance to break out more to complement Booker. How well those two stars blend and produce will determine Phoenix’s playoff fate.

18. Orlando Magic. Any hope the Magic had of making noise in the first round of the Eastern Conference playoffs may have been dashed when Jonathan Isaac — an elite player on defense — suffered a torn ACL.

19. San Antonio Spurs. The Spurs have pulled themselves back into the playoff race for the West’s No. 8 seed, but a six-point loss to the Nuggets on Wednesday isn’t going to help their cause.

20. Brooklyn Nets. The Nets are 2-2 but haven’t done anything eye-popping to better position themselves for a possible first-round victory. A 34-point loss to the Celtics on Wednesday was a real head-scratcher after their surprising 3-point win over the Bucks.

21. Sacramento Kings. It appears the Kings will miss the playoffs for the 15th consecutive season. Sitting three games back of the Grizzlies and the No. 8 seed in the West, there’s no reason to think they can mount a challenge against the Blazers.

22. Washington Wizards. The rest of the Wizards’ time in Orlando will be spent focusing on the future and getting key minutes for young stars, including rookie Rui Hachimura.