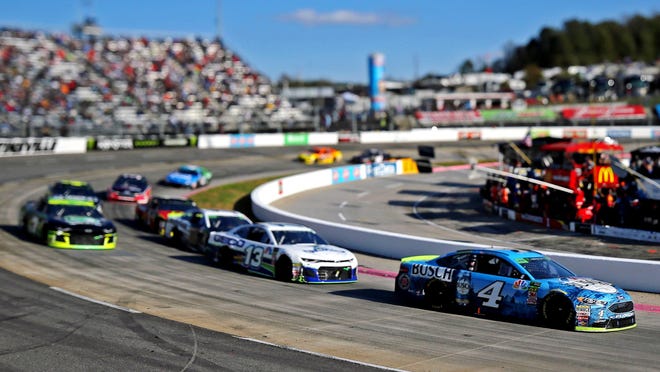 
Joe Gibbs started and ended the 2019 NASCAR Cup Series season standing in victory lane. The 2020 season is already off to a similar start for the NFL coaching legend turned NASCAR Hall of Fame owner, and there’s no reason to believe that won’t continue.

Erik Jones didn’t earn any points for his unlikely and downright ugly win in the Busch Clash, but a trophy is a trophy. And Joe Gibbs Racing gobbled up winner’s trophies last year – 19 to be exact — to set a new single-season mark for an organization in the modern area.

It was pure domination from start to finish, and as NASCAR kicks off a new season this Sunday in the 62nd Daytona 500 (2:30 p.m. ET, Fox), is there any reason to believe Gibbs won’t do more of the same in 2020?

“I think anybody with the parts that they already currently have can find a better way of doing things, so they’re going to improve, there’s no question. They’ve had all offseason to kind of think about it and work on it. So, for us, same thing. We feel like we can probably improve on the things that we have too. It’s just a matter of who’s done that and who’s made the biggest gains with the stuff that they’ve had.

“I’d like to think that 19 wins for Joe Gibbs Racing is possible again but other than that, just to go out there and try to be successful as an organization and keep that strength is where it’s at.”

All four of the Gibbs drivers were victorious last season. Three of the season’s four crown jewel races were won by Gibbs: Daytona, Charlotte, and Darlington. Busch was also crowned the regular-season champion.

For as fun as the season must have been for Gibbs supporters, the critics must have found themselves haunted by the continued images of one, if not all, of those Toyotas consistently up front.

“I think for us, our mindset is to try to do that again,” said Martin Truex Jr., who led the organization with seven wins. “I think we have confidence that we can do it. With that being said, it’s going to be difficult. Nineteen wins is a lot. We’ll just have to wait and see, but I think we’re all excited about the season and looking forward to the low-downforce package on the short tracks and road courses. I think that’ll be good for us.

“You’ve got to try and continue to evolve and push things forward, and I think that’s what the company is good at. With that said, I think we’ll have a great season and looking forward to it.”

There will be at least one variable going in the company’s favor. NASCAR officials have declared a parts freeze on Cup Series teams as development of the Next Gen car continues. That means teams will have to massage what they’ve been running rather than count on newly developed parts.

“That’s good for us, we think, with as good as we were last year,” said Jones. “I don’t see any reason why we can’t do it [again]. Obviously, a lot of things went right last year for it to happen, but I know we’ll have the speed in the cars. We just got to have a lot of things go right again, and hopefully, it all comes together.”

Meanwhile, the opposition is retooling for the fight with personnel moves.

Stewart-Haas Racing swapped crew chiefs Johnny Klausmeier and Mike Bugarewicz, sending the former to oversee Clint Bowyer’s efforts and the latter to guide Aric Almirola. Cole Custer has graduated into the series. After starting the ’19 season in the wrong direction with its cars, SHR is ready to come out swinging now.

Team Penske swapped not just its crew chiefs, but the teams for all three of its drivers. There is a renewed sense of hope in that camp.

Chevrolet is the wild card in the deck. Bowtie teams have a new car this season, and teams are very optimistic it will bring the manufacturer back into contention. Chevy hasn’t had a team in the Championship 4 since 2016, and while Gibbs/Toyota won 19 races last year, Chevrolet won seven.

Racing is cyclical, of course, and Joe Gibbs is not the type of owner to become content or assume success will be a constant. Throughout 2019’s historic run of dominance, and even after it had been capped off with a celebration in Nashville, Gibbs was still speaking to how unusual it was to have such a year.

What’s done is done, and the newly minted NASCAR and NFL Hall of Famer isn’t about to expect more of the same.

“I just think there was so much that we were able to do last year that went our way,” said Gibbs. “To win a Daytona 500, a championship, everything that went in-between, that’s just really hard in pro sports.

“You dream about it. You hope we can do it. We’ve worked that way to try and do it. But being realistic about it, I don’t think many people would give us odds to be able to duplicate that.”

But until it’s proven otherwise, the odds must go in Joe Gibbs Racing’s favor.