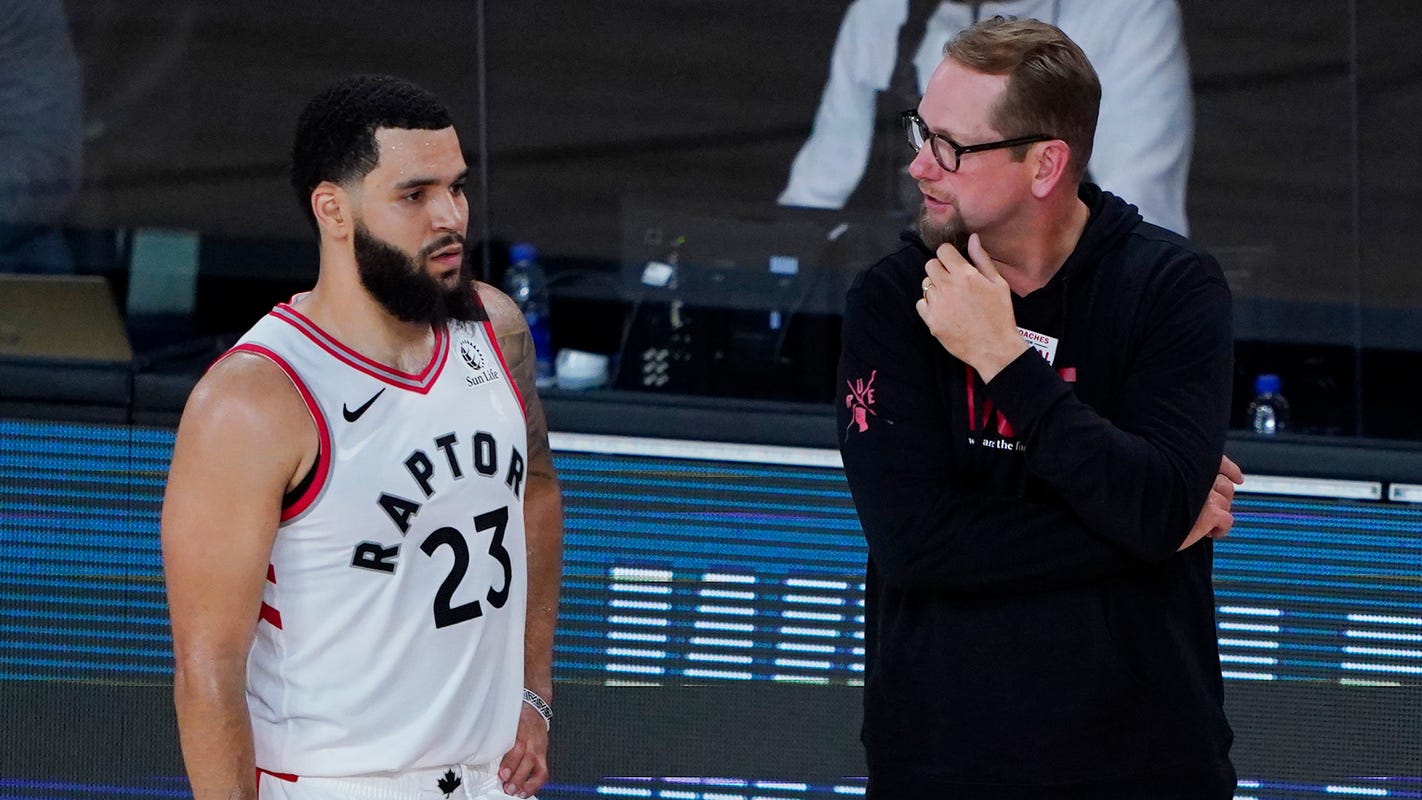 LAKE BUENA VISTA, Fla. — Without a game taking place until later in the evening, Toronto Raptors coach Nick Nurse wondered how he could fill his Saturday.

The first part was easy. The Raptors’ coaching staff met together in the middle of the morning and then talked with players after about their game against the Los Angeles Lakers. Since tip-off did not take place until 8:30 p.m. ET, Nurse still had some time.

Not enough, though. So Nurse went for a walk and then watched a handful of NBA games on television.

“That’s nice these games are on all day,” Nurse said. “We have a basketball tournament all day long in this bubble and can watch everybody get back at it.”

ON FIRE: Warren drops 53 points to lead Pacers to key win over Sixers

Normally, NBA teams do not have as much free time amid their hectic travel schedule. This time, 22 teams are on the same Disney campus at the ESPN Wide World of Sports Complex.

“The biggest thing is seeing your competitors constantly,” Nurse said. “You usually never see them. I know this will sound weird, but you will have some really good friends on the other team that you coached or played with before or coached in the minor leagues with. You’ll fly into their city and play them, but you barely get to wave at them because, boom, you’re off to the next city.”

The Philadelphia 76ers came to Disney World with high hopes, but things got off to a rocky start in a 127-121 loss to the Indiana Pacers. The Sixers had no answers for T.J. Warren, who poured in a career-high 53 points. There were fireworks on the sideline as well, with TV cameras catching a heated exchange between Sixers teammates Joel Embiid and Shake Milton between the first and second quarters. Milton had to be held back by another teammate.

Joel Embiid and Shake Milton exchanging some heated words at the end of the first quarter 😬 (via @gifdsports)
pic.twitter.com/fCm6r839cR

The Sixers downplayed the dust-up after the game. Embiid said “it’s nothing.” Coach Brett Brown is hoping something positive comes of the exchange. “I actually think stuff like that is probably more healthy than anything,” he said. “Those two will move on quickly.”

Fans will surely be on the lookout for any more signs of eroding chemistry in the Sixers’ next game Monday against the San Antonio Spurs.

The Oklahoma City Thunder opened the restart with a convincing 110-94 win over the Utah Jazz and got an emotional boost from a familiar but forgotten face.

Andre Roberson checked into the game at the 5:12 mark of the second quarter for his first official NBA appearance in 917 days. Roberson hadn’t played in a regular season game since suffering a devastating knee injury on Jan. 27, 2018. He played five minutes Saturday and made his presence felt on the defensive end with a big block on Utah’s Jordan Clarkson.

While the Los Angeles Clippers were rolling to a 126-103 rout of the New Orleans Pelicans, forward Marcus Morris tried to elicit a smile from the famously stoic Kawhi Leonard, who didn’t seem interested. That look!

Heat 125, Nuggets 105: Jimmy Butler and Bam Adebayo each scored 22 points as Miami handled Denver in the first restart game for both teams.

Thunder 110, Jazz 94: Oklahoma City shot 65% in the first half to take a 24-point lead and cruised the rest of the way for a key win in a matchup of West playoff contenders.

Pacers 127, Sixers 121: T.J. Warren poured in a career-high 53 points to rally Indiana in the fourth for a key win over Philadelphia, which got 41 points from Joel Embiid.

Raptors 107, Lakers 92: Kyle Lowry had 33 points and 14 rebounds as defending-champion Toronto held Los Angeles to 35.4% shooting from the field.

After three days of games inside the bubble, all 22 teams have played at least once, and the playoff chase is starting to take shape. The New Orleans Pelicans’ chances of grabbing the No. 8 seed in the West took a major hit with a blowout loss against the Los Angeles Clippers. Now 0-2 in seeding games and four games behind the Memphis Grizzlies for eighth, the Pelicans will need to turn things around quickly to have a shot at forcing a play-in scenario.

The race for West seeding got tighter, with seeds 3-6 now separated by just 1½ games. With their loss, the Los Angeles Lakers’ magic number for clinching the top seed remains at one. In the East, the Pacers’ win over the Sixers carries huge ramifications as Indiana clinched the all-important head-to-head tiebreaker against Philadelphia.

STEPPING UP:Warren stuns with 53 points to lift Pacers over Sixers

ON THE CLOCK: Sixers don’t have much time to get Embiid up to full speed

POWER RANKINGS:How all 22 teams in Orlando stack up for restart

BURNING QUESTIONS:Best in the West? What’s at stake for Bucks?