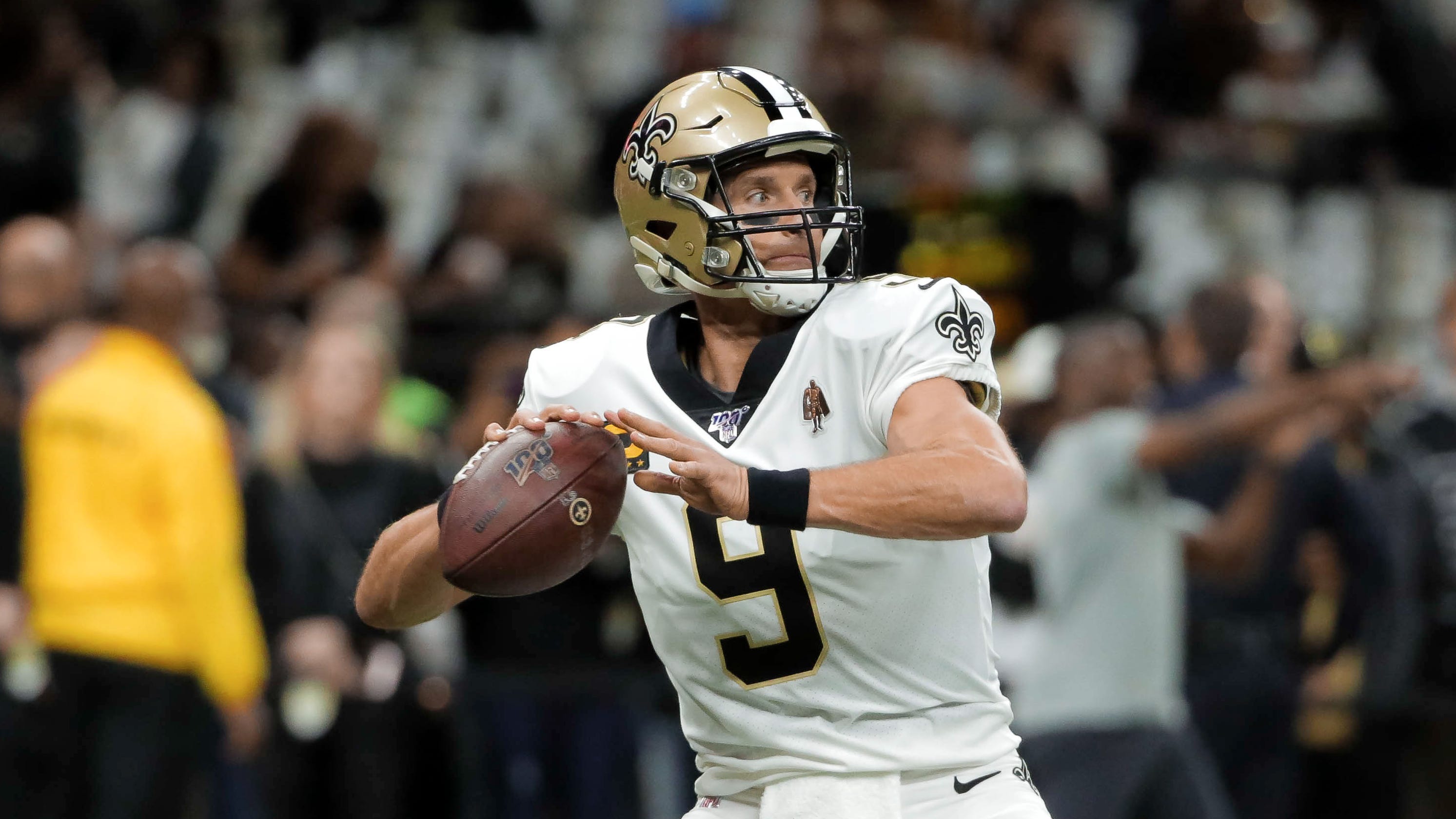 And if he can do such a thing, he believes others can stop habits such as congregating or getting physically too close to too many others.

Brees, who will enter his 20th NFL season this fall, has stopped licking his fingers.

“I’m telling you I have not licked my fingers in four months,” Brees said Saturday on a teleconference as the Saints have had testing and physicals over the past week in preparation for training camp.

“I used to do it all the time. It was such a habit,” Brees said.

The original purpose was to improve his grip on the football during games or practices prior to snaps, but that was just gateway use.

“Just turning the page of a book or just to get a little tackiness on the fingers,” he said. “If ever I was needing to pick up a stack of papers and start flipping through them, I would immediately start licking my fingers. It was just unconscious.”

Brees knew he had a problem.

“It’s one thing to lick your fingers before you get the ball and throw it. That’s perfectly normal, but to lick my fingers after I throw it makes no sense,” he said. “I didn’t know it until I saw it on film.”

Brees’ wife Brittany also hounded him about it. If he didn’t stop, he would be putting his spit — a chief carrier of COVID-19 — on virtually everything with which he came in contact.

“But even throwing the football on the field, I have not licked my fingers in four months,” Brees said. “I don’t know. I might have broken myself of the habit. We’ll see.”

The Saints are scheduled to begin padded practices on August 17 and to open the season on Sept. 13 against Tampa Bay in the Mercedes-Benz Superdome.

“I tell you this, if I can break myself of the licking-the-fingers habit, I think that means anybody can break themselves of any habit because that was out of control how much I was licking my fingers,” Brees said.

He still may have to resort to the tactic for tackier grips of the pigskin amid dryer conditions in the dome or on the road, though, and because he hopes to throw deep more this season.

Brees has been working with throwing coach Tom House, a former Major League Baseball pitcher, on long distance passing. The Saints have gotten away from that over the last two seasons, and Brees struggled to complete long passes.

In the 2018 season, Brees did not complete a pass that he threw more than 35 yards in the air until the NFC title game against the Los Angeles Rams. Last season was much the same as he feasted on the short and intermediate passes. His passer ratings of 116.3 in 2019 and 115.7 in 2018 were the best two of his career, but the lack of a deep game has hurt the Saints offense in the playoffs.

BELICHICK: Patriots did their homework before signing QB Cam Newton

Brees also may have the best pair of receivers he has ever had since becoming a Saint before the 2006 season as 10-year veteran Emmanuel Sanders signed as a free agent in March from San Francisco, possibly giving defenses a legitimate No. 2 receiver to worry about after the NFL’s best in Michael Thomas.

“If the opportunities are there, I let it fly,” said Brees, who has never had an overly strong arm. “And if it’s not, then you check it down and live to play another day.”

“I feel like perhaps in years past we had more opportunities down the field than maybe have presented themselves over the last two years,” he said. “I don’t think it’s our lack of being able to do it or lack of calling the plays for it, it’s hit or miss at times. And there’s a risk-reward to it as well. What’s the ultimate goal? To drive down the field and score touchdowns.”

The Saints struggled at precisely that in their 26-20 home loss to Minnesota in the NFC Wild Card playoffs last season as Brees had one of his worst games. Entering the third quarter, he was 13-of-19 passing for 79 yards (4.1 yards an attempt) with an interception and no touchdowns. Minnesota led 20-10 at the time and had the Saints out-gained 277 yards to 158 with 16 first downs to nine.

“We can do that in three plays with a couple big plays,” Brees said. “If we’ve got to put together 14-play drives, then we’ll do that, too. I do like those long plays down the field, though.”

Sanders is a deep threat, and Brees took a special trip last June to Denver, where Sanders played from 2014-18 before splitting time there and at San Francisco last season.

“We had a good couple days together. That was really valuable,” Brees said. “I feel great about him. Obviously, he’s a savvy veteran. He brings a great element with his skill set as being a great guy with Michael Thomas.”

A more dangerous long distance offense may be the missing ingredient for the Saints, who remain hell bent on their first Super Bowl appearance since winning it all in the 2009 season — Brees, especially, after considering retirement last season.

Brees signed a two-year contract for $50 million in March, but continues to look at his final years on a year-to-year basis. His hit this year against the salary cap is $23.65 million, which is a bargain for the Saints. Brees could have signed with another team for $30 million likely.

“It was definitely a decision that I took very seriously,” he said. “And I gave myself some time from the end of last season, a lot of thought, a lot of prayer, a lot of conversations with my wife, with others, with mentors. My wife and I had this conversation. I also feel that this year is going to be about something much greater than football. And at this point (with the changes due to COVID-19), that was an understatement.”

Brees opened the teleconference by reading a statement concerning his comments last June in an interview with Yahoo Finance that unintentionally created a firestorm of backlash from the Black community, including from teammate Malcolm Jenkins. Brees apologized at the time.

“I’ve always been someone who has felt compelled to serve. It’s the main reason why Brittany and I came to New Orleans. That was a time when I really wasn’t sure if I’d ever play football again. But I knew I had a chance to be a part of something much greater than myself. And the last 15 years in New Orleans have been some of the proudest, most rewarding moments of our lives. We’ve tried to dedicate ourselves to creating a lasting legacy of hope, of love, and progress, especially in this city.

“Going back to my comments on June 3, to think for a second that New Orleans or the state of Louisiana or the Black community would think that I was not standing with them for social justice, that completely broke my heart. It was crushing. Never, ever would I feel that way. Now, I recognize that I missed an opportunity that day. I had an opportunity to talk about and emphasize the social injustices that exist for our Black community, and our need as a country to support them and to advocate for systemic change. And my lack of awareness in that moment hurt a lot of people.

“There are three key things I want to make very clear. Number one, I’ll always stand for the flag because of what it means to me, and to honor all those who have sacrificed, who have served and died for our country, and all those who have struggled to move this country forward. Second, I acknowledge and respect anyone who chooses to kneel or any other form of peaceful protest to bring attention to the social injustices and systemic racism that so many have endured and continue to endure in our country. I will always support and advocate for the Black and Brown communities in the fight for social justice – always. Third, I’m the same person now that I’ve always been. I’m someone who cares deeply for people in my community, New Orleans, the state of Louisiana, people everywhere. I’m someone who will always address the inequities and disparities that exist. I’m someone who has great empathy for those who are hurting, struggling or victims of injustice. And I’m someone who feels a great sense of responsibility to serve and to lead and to bring true equality to everyone. Thank you.”