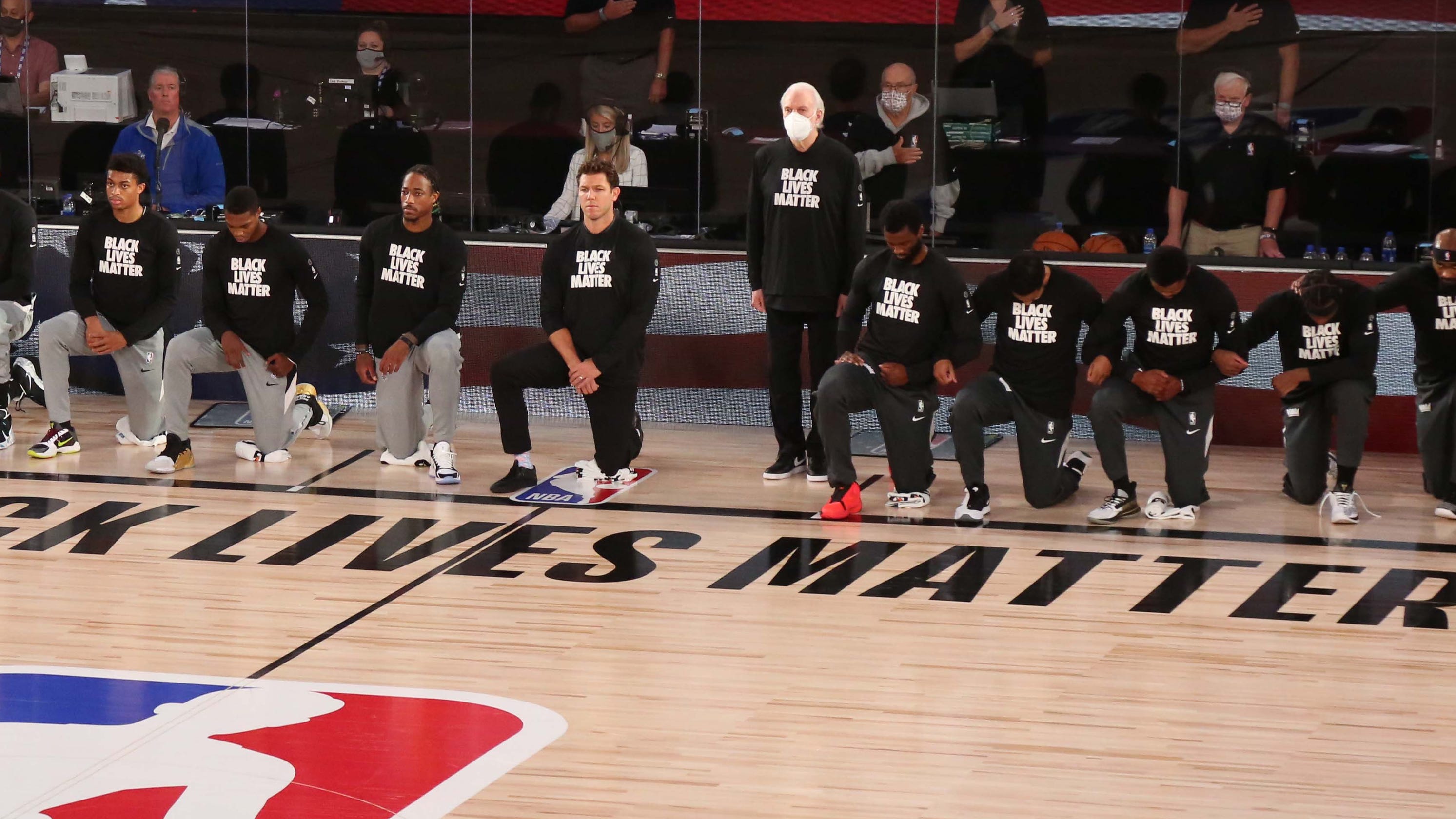 Spurs defend Gregg Popovich for not kneeling during national anthem

LAKE BUENA VISTA, Fla – The accomplished NBA coach has forcefully spoken out on systemic racism both through words and action. But despite the majority of NBA players and coaches kneeling during the national anthem to protest racial inequality, San Antonio Spurs coach Gregg Popovich stood before the Kings-Spurs games on Saturday. Spurs assistant coach Becky Hammon also stood.

“I prefer to keep that to myself,” said Popovich, who is the head coach of USA Basketball and graduated from United States Air Force Academy in 1970 . “Everybody has to make a personal decision. The league has been great about that. Everybody has the freedom to react any way that they want. For whatever reasons that I have, I reacted the way I wanted to.”

Beforehand, Popovich had said that each player and coach should decide what they should do during the anthem. In an NBA recorded PSA, however, Popovich stressed the importance for the country at large to continue its protests and efforts to fight racial inequality. Popovich has often defended former NFL quarterback Colin Kaepernick for kneeling during the national anthem to protest police brutality and racial inequality. Popovich has already criticized President Donald Trump for his racially divisive rhetoric.

“With Pop and Becky standing, I have no thoughts (contrary to) belief in them that is all out of genuine, out of a positive side of their heart,”  Spurs forward DeMar DeRozan said. “Same way we kneel. Don’t take away nothing from those guys. Pop speaks out. When it comes to Becky, she’s been (on the) front line, fighting for equality since I’ve been a fan of hers playing in the WNBA. So everybody has their own right of making a statement and you can’t vilify nobody for not doing what the other group is doing. I’m all for it.”

Like the opening games, Friday’s matchups began with more demonstrations during the national anthem. Orlando forward Jonathan Isaac did not kneel for the national anthem with the rest of the team. Isaac later said he discussed his decision with teammates, who supported his choice.

Jonathan Isaac is the first player during the restart to stand for the National Anthem.

All the remaining coaches, players, and members of both teams took a knee. pic.twitter.com/i2yy8qCPn3

The @celtics and @Bucks kneel in solidarity as @NeYoCompound performs the National Anthem. pic.twitter.com/qxNCrmqFbV

Portland Trail Blazers big man Jusuf Nurkic made his triumphant return to the court 16 months after suffering a gruesome broken leg but later said he played with a heavy heart. After the Blazers’ win, Nurkic revealed his grandmother is in a coma in Bosnia after contracting COVID-19. He made an emotional plea for people to treat the pandemic seriously: “Please take care of yourself. Wear a damn mask.”

Jusuf Nurkic reveals his gramma contracted COVID-19 and is in a comahttps://t.co/gdwRT0OQx5pic.twitter.com/bS6EwxXi3k

Marcus Smart expressed his displeasure with a key call late in the Boston Celtics’ loss against the Milwaukee Bucks. Smart appeared to draw a charge on Giannis Antetokounmpo with 1:28 left that would have been the Bucks star’s sixth foul. After a review, though, officials changed the call to a blocking foul on Smart. Antetokounmpo scored on the play and hit the ensuing free throw to put Milwaukee ahead 110-107 on their way to a 119-112 win.

Marcus Smart tries to draw the charge on Giannis. Was he still in the restricted area, though? (via @ESPN) pic.twitter.com/fzalEI0OyW

“The excuse was I was late on the charge,” Smart said afterwards. “The replay center said I was late and it was a block. Quite frankly, I think we all know what that was about. Giannis has six fouls. They didn’t want to get him out. Let’s just call a spade a spade. That’s just what it is.”

“I think we all know what that was about… Giannis has 6 fouls. They don’t want to get him out.”

Marcus Smart discusses his foul at the end of the 4th quarter. #Celticspic.twitter.com/57LZysT7oJ

Jaylen Brown had Smart’s back, taking to Instagram after the game to post a picture of two people holding hands with the superimposed heads of Antetokounmpo and referee Ken Mauer.

Spotted among the virtual fans on the video screen for the Rockets-Mavericks game: Dallas legend Dirk Nowitzki.

.@swish41 was seen in the virtual fans section during the Mavs vs. Rockets game 😅

Magic 128, Nets 118: Orlando led by as many as 30 on the way to an easy win and moved past Brooklyn into seventh place in the East.

Blazers 140, Grizzlies 135 (OT): Portland held on for the victory in an exciting finish to pull within 2½ games of Memphis for eight in the West.

Bucks 119, Celtics 112: Giannis Antetokounmpo finished with 36 points and 15 rebounds as Milwaukee used a late push to win the matchup of East contenders.

Spurs 129, Kings 120: DeMar DeRozan scored 17 of his 27 points in the fourth as San Antonio pulled away despite a career-high 39 points from Sacramento’s De’Aaron Fox.

It’s still early in the seeding games, but Friday saw a couple notable results with impact on the standings. Portland’s win over Memphis was huge, helping the Blazers gain ground on the Grizzlies for eighth in the West. The victory should boost Portland’s confidence moving forward against a tough remaining schedule. San Antonio is just a half-game behind the Blazers. Orlando could have the inside track for the No. 7 seed in the East after topping a depleted Brooklyn squad.

The remaining six teams that have not yet played will take the floor Saturday for the first time. With a couple key matchups between conference contenders, the race for playoff seeding could start to take shape.

WHERE WERE WE?State of the playoff race as the season resumes

HEAVY HEART:Nurkic reveals grandmother is in coma with COVID-19

NATIONAL ANTHEM:Power of kneeling has changed — or have we?

GRIND IT OUT:Lakers and Clippers show what will determine NBA champ

POWER RANKINGS:How all 22 teams in Orlando stack up for restart

BURNING QUESTIONS:Best in the West? What’s at stake for Bucks?