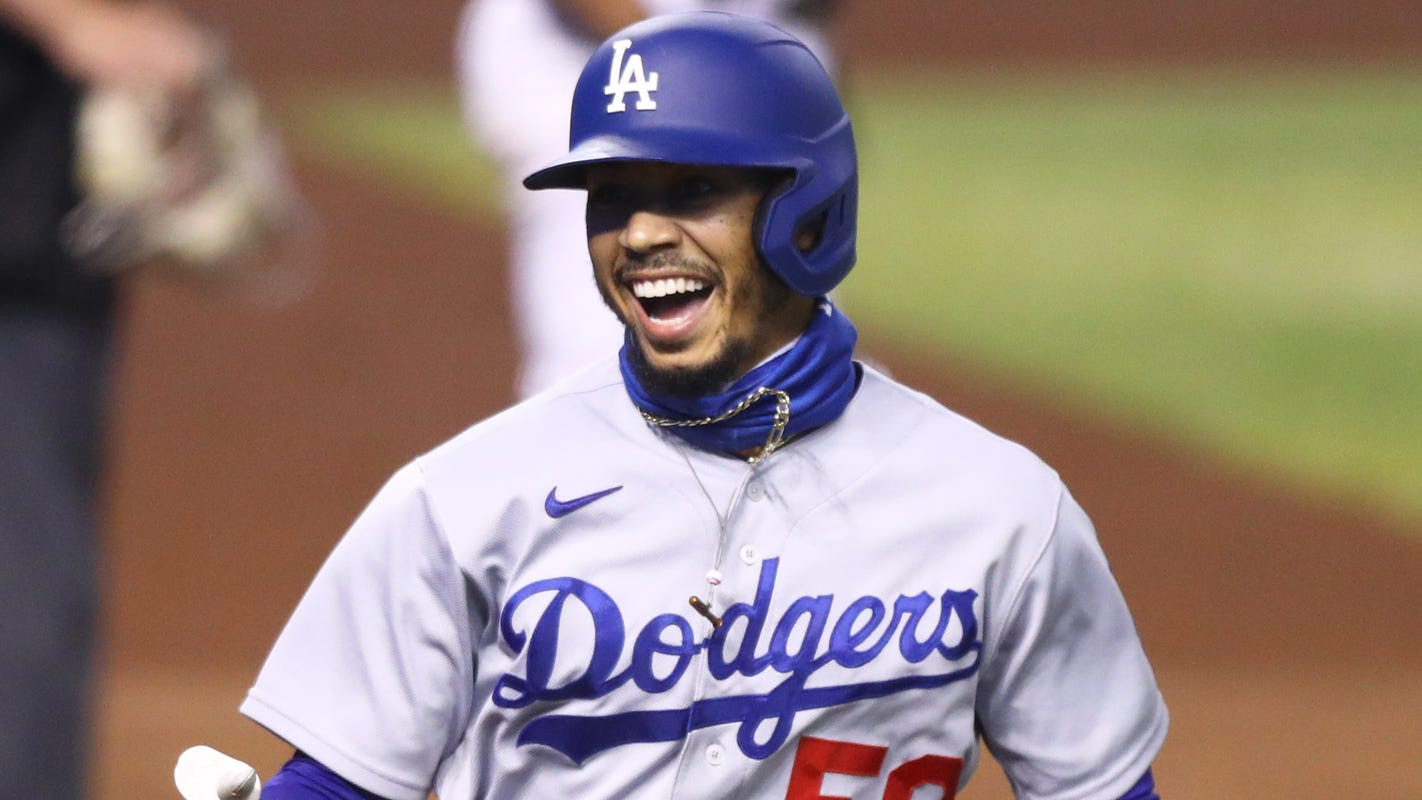 Mookie Betts does it all in coming out party

PHOENIX — There were no Los Angeles Dodgers fans in the stands Friday to cheer, chant his name or bow out of reverence.

No teammates willing to high-five him, hug him or give him a little dab.

The coronavirus pandemic has changed life as we know it, but no matter what you care to remember about this year — or totally forget — the night of July 31, 2020, will live in Los Angeles Dodgers infamy.

The Dodgers to the Arizona Diamondbacks 5-3, but this will be remembered as the night of Mookie Betts’ coming out party.

A week ago, he became the league’s highest-paid player with a 12-year, $365 million contract extension, the richest in baseball history. On Friday night, he showed why he just may be worth every penny and a whole lot more.

“It doesn’t matter whether it’s the glove, the bat, the arm,” Dodgers manager Dave Robert said. “I guess that’s why he’s wearing gold out there.”

CRANE COMES CLEAN: Astros owner says scandal “weighs on all of us”

Diamondbacks hitter Ketel Marte led off the first inning by dunking a ball into the right field corner. Marte was rounding second base when Betts got to the ball on the warning track and in one motion, picked it up on the run and threw it with all of his might. It sailed 305 feet in the air and landed in the glove of Corey Seager, who easily tagged out Marte at third base.

It certainly was the greatest throw of this young season, and maybe the best we’ll see the entire year.

Betts, who has averaged 29 homers and 44 doubles the last four seasons, hit a 2-2 changeup over the inside of the plate in the fourth inning and somehow drove it just inside the left-field pole into the Diamondbacks bullpen for his first Dodgers homer.

“I don’t know how it stayed fair, but it did,” Betts said.

MOOKIE BETTS IS A DODGER. pic.twitter.com/gYHPn3YDEb

He came into the dugout and received, well, pretend high-fives.

“It’s super weird without fans, it’s really weird,” Betts said. “And not being able to touch is really weird.

Betts, who won the American League batting title with a .346 batting average in 2018, stepped up with runners on first and third in the fifth inning and calmly poked an 89-mph cut fastball into right field, scoring Edwin Rios for a 2-0 lead.

And in the bottom of the sixth, he saved a run on a nice running catch off the bat off Christian Walker towards the right-field line, accepting more air high-fives from his teammates.

With a runner on first base and the Dodgers down to their last out in the ninth, Betts hit what appeared to be a routine single to center field, only to stretch it into a double, representing the tying run.

He wound up stranded at second with 2019 MVP Cody Bellinger popping up to third base for the final out, but the drama was set up by Betts.

“I was just trying to get on base,” Betts said. “When you got Belly behind you, one swing can change that whole game.”

So there it was, for all of the West Coast to see: Single. Double. Home run. Run. Outfield assist. Speed.

“That,” Roberts said, “was pretty impressive.”

No wonder the Dodgers, seeking their first World Series title since 1988, doubled down on baseball’s protocols Friday, doing everything in their power, at least, to make sure this season doesn’t shut down.

They had all eight of their position players wear a neck cloth covering their face, as well as all of their bench players sitting in the stands, too.

So important they even came up with their own health and safety rulebook before the game:

“I do think that everyone needs to take responsibility for their actions,” Robert said. “I really do. You’re talking about being under the microscope with the CDC, the American population and how we’re doing things, and we have to be accountable. Whether it’s guys on the bench in the ‘pen, away from the field, all this stuff matters.

“We’ve come so far to get to this point and for it to be shut down because of people being irresponsible certainly is unacceptable.”

Besides, the Dodgers have the national stage set for Betts and a World Series to win. But to make it all possible, they need the season to endure, lasting long enough for all of L.A. to celebrate Hollywood’s newest and biggest star.