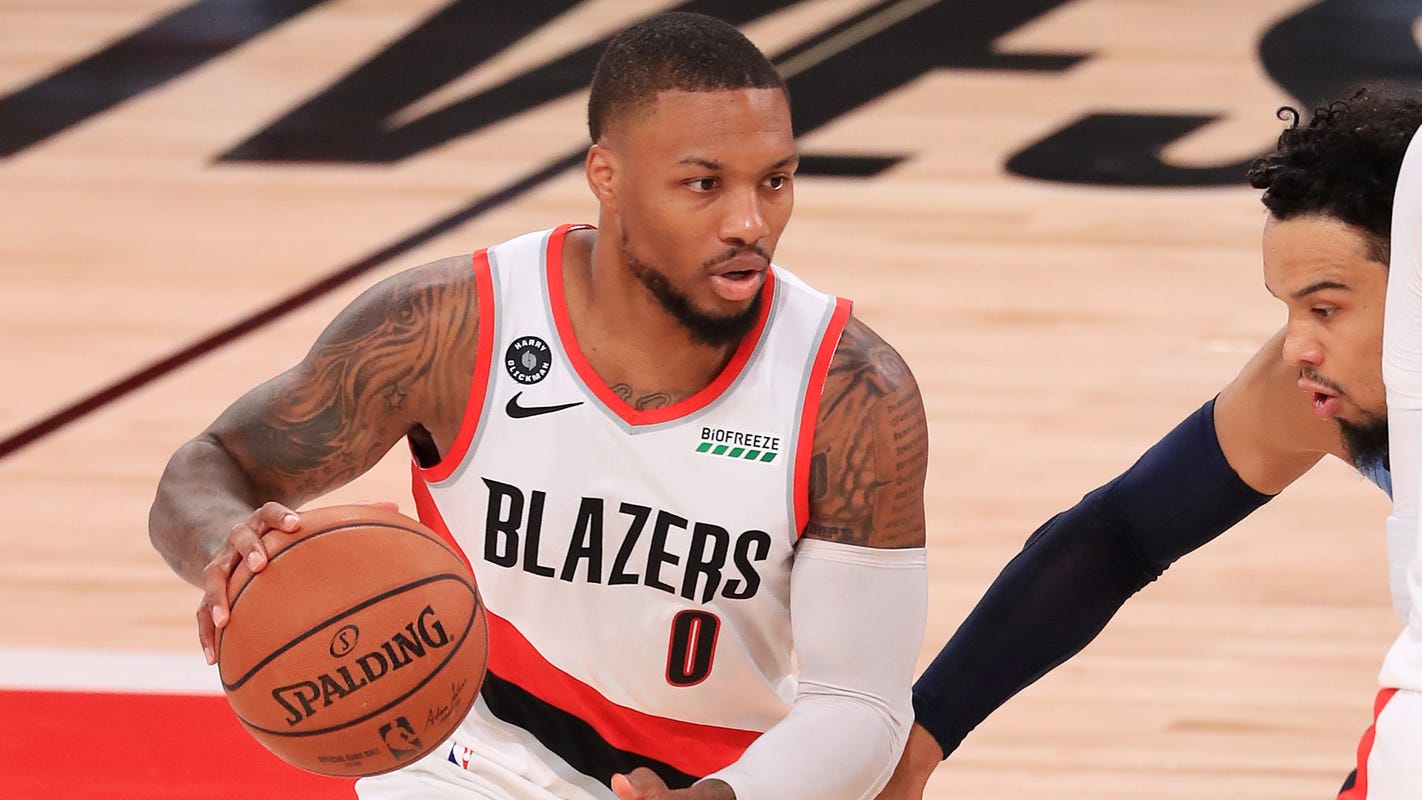 Lillard’s belief in Blazers will carry them to West’s No. 8 seed

LAKE BUENA VISTA, Fla. — Just as Damian Lillard believed his left foot had healed, a new discomfort developed, this time after an opponent bumped him.

The Portland star felt soreness on a muscle that attaches his pelvic bone to his abs, making him irritated almost every time he stayed on the court. That did not deter Lillard from playing. Not with a postseason bout on the line.

“I wasn’t going to sit out or nothing,” Lillard said. “So I just tried to do whatever I could to keep it loose so I could be ready to go back into the game and still be ready to perform.”

All Lillard needed to do? Stretch along the bench. Ride a stationary bike. And then forget about the pain. He had a game to dominate. So he did. He led the Trail Blazers to a 140-135 overtime win over the Memphis Grizzlies on Friday at ESPN’s Wide World of Sports Complex, and the result meant two things.

👀 the BEST OT BUCKETS from the @trailblazers in their thrilling victory against Memphis! #RipCity#WholeNewGamepic.twitter.com/wI3KX6zzdT

Portland (30-37) trails Memphis (32-34) by just 2½ games for the Western Conference’s eighth and final playoff spot with seven seed-in games remaining. Lillard, who had 29 points on 10-of-22 shooting and nine assists, showed he has the talent and mental toughness to overcome an injury and make the Trail Blazers the most likely team to secure that eighth spot.

The reasons? Not only does Lillard elevate his team with his talent and experience. He does so with his relentless optimism. He views any obstacle as a mere speed bump.

“Every year we’ve had him, he never thinks he’s out of anything,” Portland coach Terry Stotts said. “Whether it’s out of the season or out of the game, that’s the way you can tell with how he plays. That’s how he approaches everything. That rubs off on all of his teammates.”

HEAVY HEART: Nurkic reveals grandmother is in coma with COVID-19

Lillard did not always have that luxury this season. The frontcourt remained decimated with long-term injuries to Zach Collins and Jusuf Nurkic. The Trail Blazers acquired All-Star Carmelo Anthony, who revitalized his Hall-of-Fame career after spending almost an entire year not playing in an NBA game amid a perception he could not fit in the modern league. Therefore, Stotts considered this season as “a challenging year for Damian.” Lillard did not.

He still recorded career highs in points (28.9) and assists (7.8). He remains on pace to set a franchise record for best scoring average. And as Stotts observed, “he’s having arguably his best season trying to carry the team.” With a dependable C.J. McCollum (33 points), a slimmed-down Anthony (21) and a healthy Nurkic (18) and Collins, the Blazers have praised him for elevating them instead of making them mere observers.

“I just maintain who I am. I don’t try to step outside of I got this guy,” Lillard said. “I may have to adjust my style with what I’m doing on the court to accommodate Melo or accommodate Nurkic being back or Zach being back. The standard and style of my leadership and my presence is going to be the same regardless of who’s in there. I haven’t had to change anything.”

None of the other West playoff bubble teams have such qualities.

As Friday’s game showed, the Grizzlies are still too young, will not have forward Justice Winslow (hip) for any of the season restart and guard Tyus Jones (knee) for at least a week. The Spurs (28-36) might have corporate knowledge, but LaMarcus Aldridge (shoulder) won’t play. The Pelicans (28-37) are attaching minute restrictions on rookie Zion Williamson after he missed a combined 13 days of scrimmages and practices to handle what the team has called “an urgent family matter.” The Kings (28-37) won’t have Marvin Bagley III (foot) for this season restart, either.

As for the Blazers? They have become one of only five NBA teams to make the playoffs the past six seasons, which included two Pacific Division titles and an appearance in last year’s Western Conference finals. Book the Blazers for another playoff appearance. Will that be enough to upset the top-seeded Los Angeles Lakers? Probably not. Not with LeBron James and Anthony Davis remaining healthy and consistent.

Just like with his latest injury, Lillard would only see that as a challenge. He did score 48 points against the Lakers in late January, stealing the night dedicated to the late Kobe Bryant by putting on a show the former Laker icon would appreciate.

“It’s being competitive and having true belief. Anything that I’m a part of, I believe it can get done whatever needs to get done,” Lillard said. “When you consistently have that mentality, if you’re a part of a team or you’re a part of a group, I think if they look to you, then everybody is going to naturally take that same mentality.”