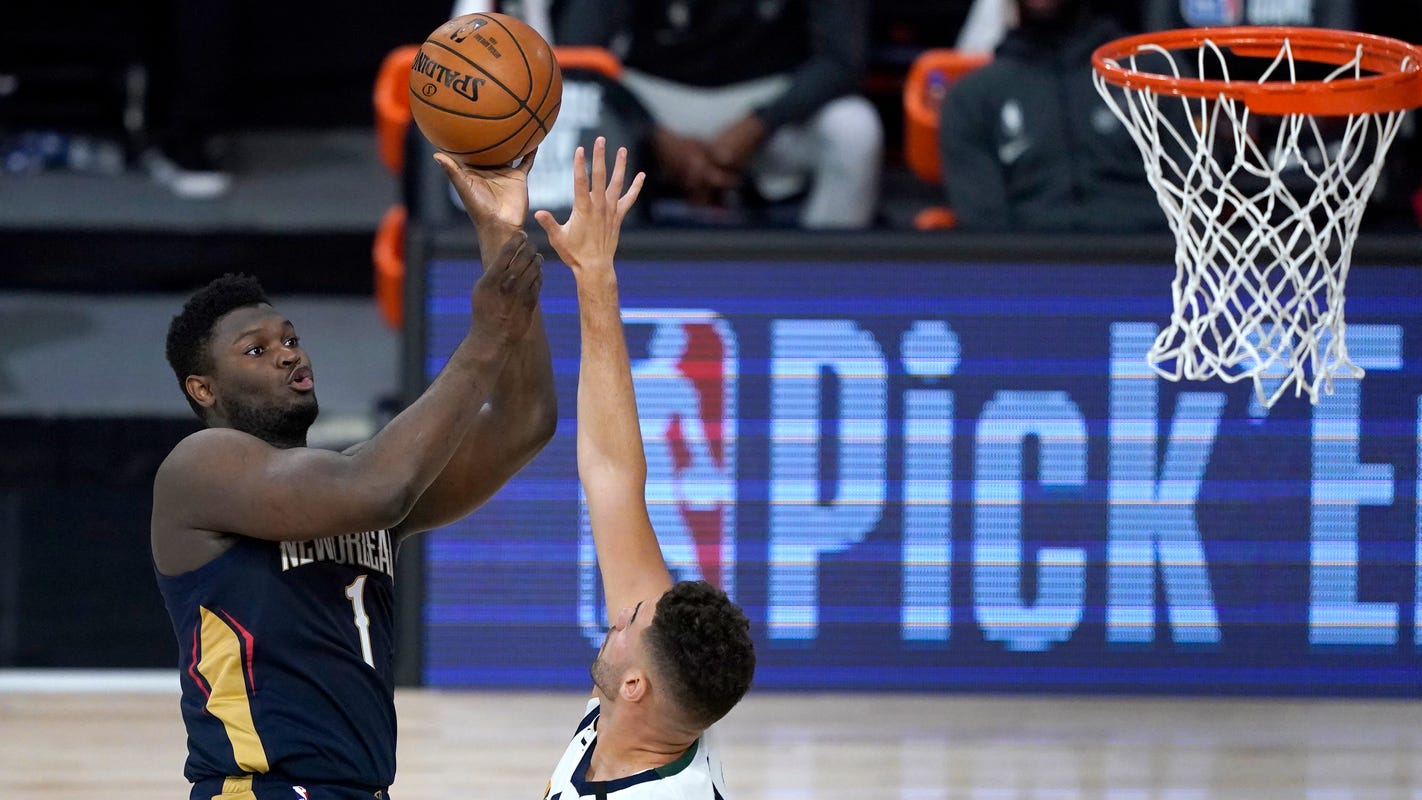 Pelicans explain why Zion Williamson had limited minutes in opener

Rookie sensation Zion Williamson played 15 minutes and wasn’t on the court for the final 7 minutes, 19 seconds of the New Orleans Pelicans’ loss to the Utah Jazz in the NBA’s restart opener.

It caused a stir. Why didn’t Williamson play more Thursday? Why wasn’t he on the court with the game on the line in the final minutes?

The answers are simple and logical, and the Pelicans on Friday went to great lengths to explain their decision to limit Williamson’s minutes.

First, the Pelicans devised return-to-play plans not only for Williamson but for all of their players, and Williamson missed time on the NBA campus when he left to tend to a family emergency. He didn’t get the same amount of practice and scrimmage time.

Second, New Orleans’ future with Williamson is far more important than these seeding games, a potential playoff spot and a first-round matchup against the Los Angeles Lakers. While the Pelicans are not talking about his minutes precisely in those terms, it makes perfect sense. The Pelicans are in position to be a prominent team in the league for several seasons if things go right. They want to make sure that happens.

“I know there’s a lot of consternation about the fact that he didn’t play more, and I wanted to try to make this make sense to everyone,” Griffin said. “What happened when we got here was, our performance team had a very clear plan laid out for every member of the team and every member of the team got to go through that plan. That plan included scrimmage minutes that many of the team got to play. Many of our players were held to 15 minutes or 12 minutes or whatever, not because there’s a fixed minute number, but because there was a fixed approach to how they were going to play the game. Everybody got to do that during the course of the scrimmages. Zion didn’t get that opportunity. …

“Unfortunately he’s 13 days removed from the group in terms of following that plan after not playing basketball for what amounts to four months. So I appreciate the fact that everybody wants him to play 40 minutes (Saturday) night … I can promise you that he’s not going to.”

Williamson had 13 points in 15 minutes against the Jazz, but he did not have a rebound and the Pelicans were outscored by 16 points with him on the court.

Griffin expressed frustration with criticism that the organization received for Williamson’s limited minutes. The Pelicans are scheduled for seven national TV games, and there is significant focus on Williamson, who is one of the most regarded rookies since LeBron James entered the league in 2003.

“What I’m frustrated by is that there has to be a conspiracy theory involved when literally there’s not one thing different that’s being done with him than was done for every player on this roster when we got here, and he missed 13 days of what those guys got,” Griffin said. “Now, all of the sudden, because the stakes are raised and because unfortunately we were selected for seven national (TV) games, we’re supposed to reinvent the wheel. It’s not fair to the kid, so I think on his behalf I’m a little bit frustrated, sure.”

Griffin didn’t have any specific injury concerns but acknowledged what he has said before about Williamson – that he has a unique physique.

“As he grows and matures as a player and evolves physically, he’s going to change radically, so being in front of all of that is important for us,” Griffin said. “The one thing that I would say relative to him specifically is – and I’ve said it many times – the amount of power and torque he generates is off the charts, relative to any other player that we’ve ever tested. It makes the things that you need to provide him, so that he can compete at the highest level, a little more unique. We’re learning that as we go along, as well.”

Yes, NBA fans miss out on seeing Williamson play more, but the Pelicans’ obligation is to the player, team and fans who want to see New Orleans compete for a title, which won’t happen this season.

“We have to be smart,” Pelicans coach Alvin Gentry said. “You have to understand, obviously, coaches are competitive, but the big picture is, we have to have healthy people to play throughout the season. We hired medical guys that are very good at their job, and as a coach, you have to be able to listen to those guys because they know best, and whatever minutes they say a guy is able to play, you have to be able to do that. The big picture is that we’re trying to win an NBA championship, and I think whatever it takes to try to get to that situation, or that position, we’ve got to be willing to follow the people that are experts in that particular area.”