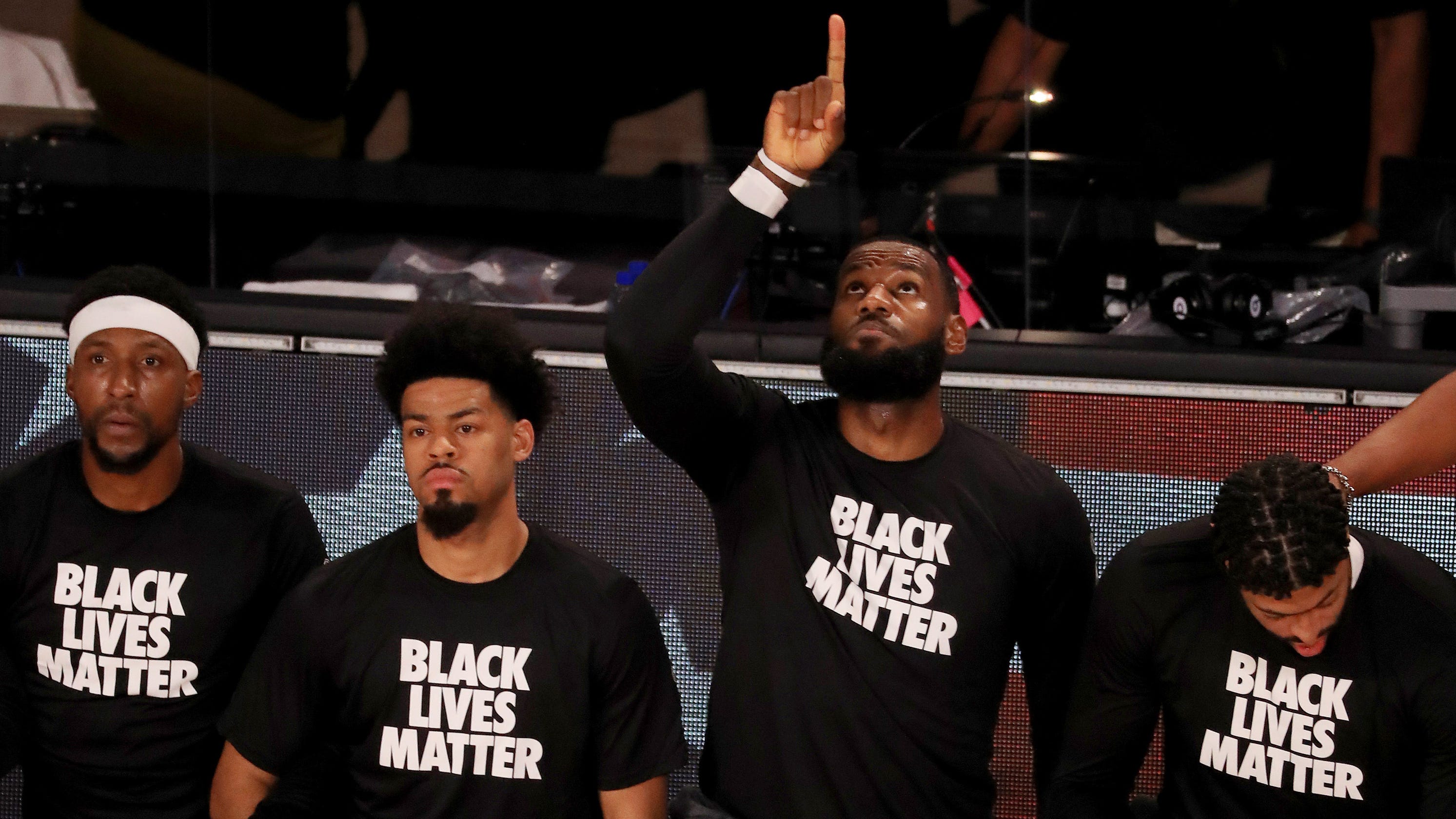 The defining image of the NBA’s relaunch Thursday night came prior to tip-off when players and coaches from the Utah Jazz and New Orleans Pelicans locked arms and knelt in unison during the playing of the national anthem.

It was the first time since Colin Kaepernick’s silent protest during an NFL preseason game in 2016 that NBA players knelt, as NBA rules have required players standing in a line during the national anthem since 1981.

But this time, the gesture wasn’t shocking, nor did it seem particularly like an act of protest. Outside of the usual right-wing media voices who day trade on casual racism, there was little online outrage. Even President Trump, who rarely misses an opportunity to commandeer sports for the purpose of a culture war, couldn’t be bothered to send a Tweet about it.

Though purposely refusing to stand up for the anthem is an act that certainly still discomforts a large swath of Americans, we may have come to the point where kneeling by itself has lost some of its power or, at the very least, taken on a different meaning.

While kneeling is still symbolic and potentially powerful, it no longer seems like defiance. When everyone does it — when it’s tacitly sanctioned by the league with the expectation that everyone will participate — it leaves the distinct feeling that something fundamental about the act itself has changed.

Or maybe what’s changed is the rest of us.

LeBron James of the Los Angeles Lakers points up as he kneels with his teammates during the national anthem prior to the game against the LA Clippers at ESPN Wide World Of Sports Complex on July 30. (Photo: Mike Ehrmann, Pool Photo-USA TODAY Sports)

If the last few months should have taught us anything, it’s the realization that who stands at proper attention for a flag and who chooses not to is a rather picayune thing to worry about given our current circumstances as a country. And for many Americans this summer who have finally accepted that disparities still exist for Black people in everything from policing to health care to voting access, the idea that there’s some minimum level of national gratitude that should be tied to a flag and a song no longer seems like a particularly meaningful standard.

When Kaepernick kneeled for the explicit purpose of bringing attention to systemic police violence, much of the backlash was rooted in the idea that A) Black people aren’t really treated differently by police and B) America must be critiqued in a very specific way that does not offend White people or make them question anything about the country they live in.

LIVE UPDATES: Magic forward is the first player not to kneel

LEBRON: ‘I hope we made Kaep proud’

That’s what frustrated so many people about Kaepernick: Even when he got blackballed from the NFL, there was no way to ignore him or the movement he started. In essence, what he did worked and the defining events of this year have proven to a majority of Americans that he was right.

One public opinion survey after another over the last few months has shown that the country now accepts the premise that we haven’t done enough to address racial disparities on a whole host of issues and that the Black Lives Matter movement is worthy of support. Just this week, a Gallup poll revealed that 65 percent of adults support the protests and that 54% said their views on racial justice changed at least a little bit as a result.

That’s why you’ve seen the argument against NBA players shift sharply in recent weeks. It’s no longer really about kneeling, since most of us are now clear about what it represents and why it was done in the first place.

Now it’s all about claims of hypocrisy over the league’s activities in China, a cause taken up by people like Sen. Josh Hawley (R-Mo.) and Sen. Ted Cruz (R-Texas), who somehow have time during a global pandemic and economic meltdown to cohort with unscrupulous sports talk radio hosts for performative trolling and whataboutism.

As clumsily as the NBA and LeBron James may have handled some of the complex issues around free speech and human rights that inevitably come up for any American company doing business in China, it doesn’t take much effort to see through that shell game.

The bottom line, as sports return in earnest to our televisions and our daily lives, is that the public has made its final judgment on kneeling and professional athletes advocating for social justice.

What might have been a polarizing topic two years ago in a different time when the country had different priorities now only draws criticism from a niche group of whiners who will spend the next few months stomping around on social media while the rest of us are just glad to be able to watch sports again. Ironic, isn’t it?

If there’s any danger about the NBA’s mass kneeling, it’s that it will become such an ingrained part of the experience of watching the league that it becomes no longer worth noticing or talking about. That it will lose its power to motivate change as much as it has lost the power to generate backlash.

But these days, those who promise to never watch the NBA or NFL or any sports league because of kneeling are treated like toddlers at the dinner table who cry over the sight of a Brussels sprout on their plate, even though nobody is forcing them to eat it. That feels like real progress.

Just 4½ months ago, when the NBA paused its season due to COVID-19, Black athletes using the platform of the national anthem to raise causes and concerns would not have happened without a significant discussion about the consequences. Now, it’s an ingrained part of the experience. For better or worse, the power of that act will never be viewed the same way.