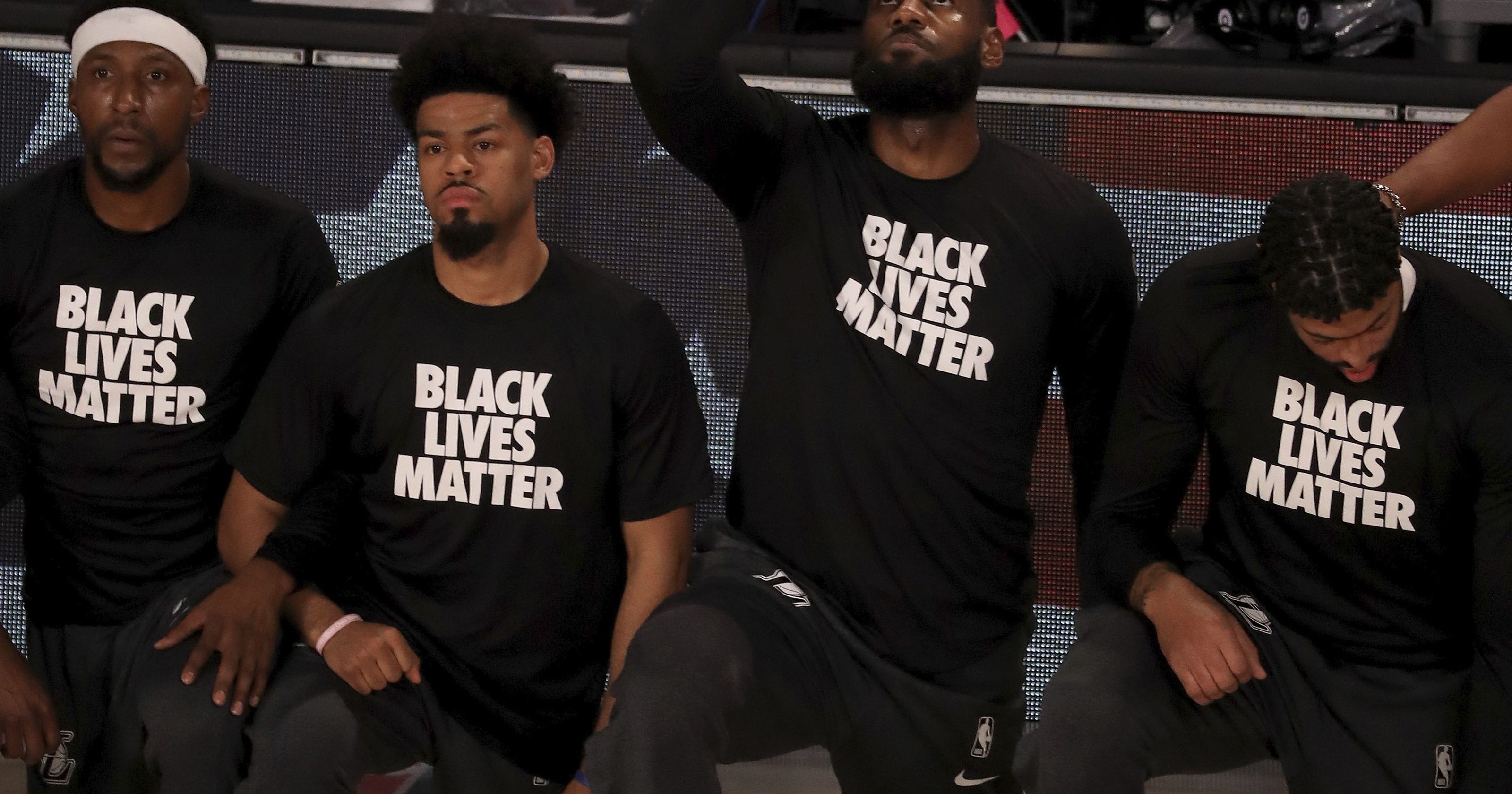 LeBron James hopes he made Colin Kapernick proud by kneeling

“Every single day I hope I make him proud in how I live my life, not only on the basketball floor but off the floor,” James said after the Lakers’ 103-101 win over the Clippers Thursday. “I’ve been one to always speak out about things that I feel like is unjust. If I’m educated on things, I always go about it that way. So Kaep was someone who stood up when times weren’t comfortable, and people didn’t understand or refused to listen to what he was saying.”

BUBBLE BROADCASTS: NBA needs to make a few tweaks, but it was a good start

WHERE WERE WE?: The state of the NBA playoff picture as the season resumes

Los Angeles Lakers’ LeBron James wears a Black Lives Matter shirt as he points up and kneels with teammates during the national anthem prior to an NBA basketball game against the Los Angeles Clippers, Thursday, July 30, 2020, in Lake Buena Vista, Fla. (Mike Ehrmann/Getty Images via AP, Pool) (Photo: The Associated Press)

James may have listened, but he did not immediately follow through with Kaepernick’s actions. When some NFL players followed Kaepernick’s gesture in 2017, James resisted. The reason? James told reporters, “my voice and what I do in my community is more powerful than getting on a knee.”

The other unspoken reality. The NBA established a rule in 1981 that “players, coaches and trainers must stand and line up in a dignified posture along the foul lines” during the national anthem. At the time, NBA commissioner Adam Silver said he expected for those in the league to follow that rule. Those in the NBA obeyed partly because it appreciated the league allowing them to speak out on these issues anyway.

With the league’s social justice efforts taking center stage during the restart, the NBA delivered poignant moments Thursday night. Before each game, the league played a PSA against systemic racist. Then players, coaches, staffers and referees locked arms and kneeled during the national anthem.

Lakers, Clippers and officials lock arms and kneel together to protest systemic racism during the national anthem. pic.twitter.com/AGQbxYvyjJ

Pelicans rookie phenom Zion Williamson was in the starting lineup after returning to the bubble and completing a four-day quarantine. He did not appear to have lost a step during the shutdown, but he was still limited to 15 minutes on the floor during a New Orleans loss. Cameras kept finding Williamson on the bench during crunch time, leaving plenty of observers confused.

PUT
HIM
IN
THE
GAME pic.twitter.com/0xFrqMB6xw

Blows my mind how the Pelicans had a minutes limit for Zion yet none of those minutes include the final three minutes. They had a winnable game and they completely blew it.

I can’t wrap my head around limited minutes for Zion that don’t include crunch time when you’re trying to make the playoffs and need every game.

The Zion Minutes Restriction just cost the Pelicans a win.

The arenas being used on the Disney World campus are open to players to watch other teams play. Several players took the opportunity to watch the Lakers-Clippers game from courtside. Damian Lillard, C.J. McCollum and Carmelo Anthony of the Trail Blazers and DeMar DeRozan of the Spurs were among those spotted along one sideline.

Dame, CJ and Melo in the building for Lakers/Clippers 👀 pic.twitter.com/qGDZhz4KZ4

CJ, Dame, Melo and DeRozan getting ready to watch the Clippers / Lakers game 🔥

With as many as seven games a day over the next two weeks, here’s hoping we see more players as fans — and maybe even some heckling.

Jazz 106, Pelicans 104: Rudy Gobert sank a pair of free throws with 6.9 seconds left to give Utah the win in the first game of the Orlando restart.

Lakers 103, Clippers 101: LeBron James scored on a putback with 12 seconds left after rebounding his own miss to seal a Lakers win moments after Paul George tied it for the Clippers with a huge 3.

With the season resuming in earnest Friday, the postseason picture will begin to come into focus. After winning Thursday, the Lakers increased their lead to 6½ games over the Clippers at the top of the Western Conference and moved closer to clinching the top seed.

After the top spots, the race in each conference is tight. Only five games currently separate seeds 2-7 in the West, with six teams below that vying for the final playoff spot. In the East, seeds 2-6 are in flux, with three teams playing for the last two seeds.