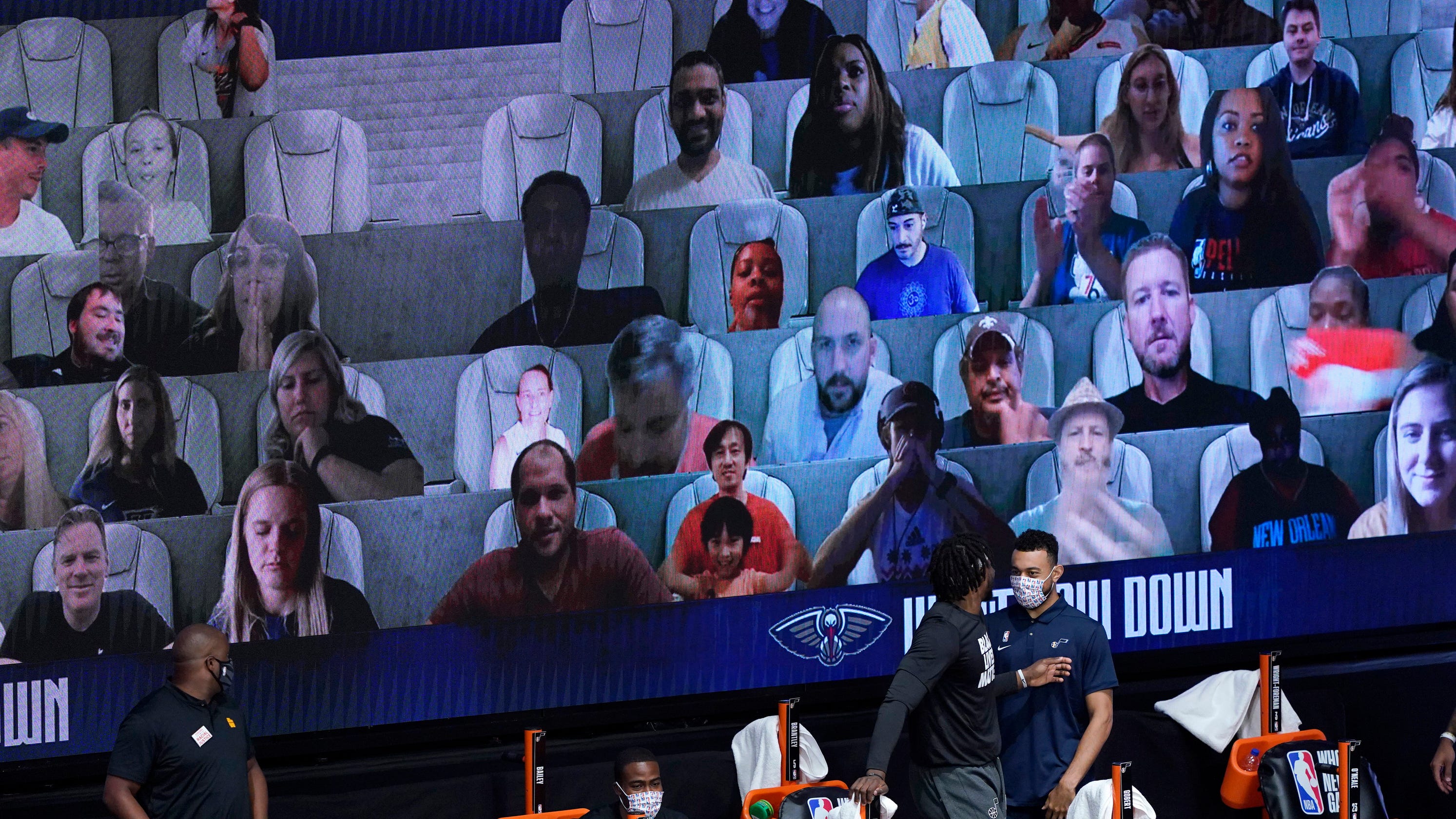 Let’s start with the premise that we prefer watching NBA games with fans in attendance and work from there.

Given the circumstances of a global pandemic and the league trying to do everything it can to finish the season safely and limit COVID-19 cases on its Disney campus, we can still enjoy fanless games on TV – in all their awkwardness, too.

Give the NBA and its TV partners credit for creating an atmosphere that limits the oddness. It could be a much worse experience, and it’s likely to improve.

Anyway, in usual times, we can accept, and even appreciate, unusual viewing experiences.

This is one of those times as the NBA resumed its season Thursday with two games – Utah defeated New Orleans 106-104 and the Los Angeles Lakers beat the Los Angeles Clippers 103-101.

Hiding lower-bowl seats and using virtual fans on screens weren’t as distracting as one might have thought had the idea been proposed five months ago before COVID-19 altered life. Virtual fans beat cardboard cutouts, and the way the cameras focused on the court, it’s not like the “fans” were omnipresent. They served a purpose.

Photos of fans are seen on screens during the game between the Pelicans and Jazz at HP Field House. (Photo: Getty Images)

Yes, it looks strange with no actual fans in courtside seats and filling the seats behind the benches and backboards. A couple of times, the camera angles gave the impression of watching an NBA2K video game.

The between-quarter interviews with coaches was strange since coach and reporter had to social distance from each other. That’s something the networks will revamp.

But viewers can get past all the peccadillos by focusing on the game. After all, that’s what matters most.

The digital advertising boards around the court, the Smoothie King logo on the court (it was considered a Pelicans “home” game) and other TV graphics provided and the announcing from TNT’s Ian Eagle, Stan Van Gundy, Kevin Harlan and Reggie Miller also gave viewers a familiarity that aided the viewing experience.

It was a chef’s kiss when the Lakers’ starters were introduced by revered Lakers public address announcer Lawrence Tanter, who is not there but whose voice was recorded for the moment. Special touches like that will go a long way in pleasing fans.

The telecasts had a Summer League feel to them. The viewer could hear sneakers squeaking more than a normal game. You could tell the game wasn’t being played in a regular NBA arena.

One aspect worth monitoring is the emotion players derive from that fan atmosphere. There was no home crowd or road crowd to energize a player, and except for moments here and there, the games seemed to lack normal intensity.

What else was missing? I’m not alone in wanting to hear more live dialogue among players, coaches and referees – not the sanitized and edited version following commercial breaks. I also understand why the NBA is hesitant to broadcast some of that talk live, as USA TODAY Sports reported in May.

I didn’t hear much extra-curricular noise, such as too much music, and the sound of the digital cheering was a little low on my TV (a good thing if you don’t like artificial crowd noise). If you visit nba.com or the NBA app, you can participate in the virtual cheering.

If you’re an NBA League Pass subscriber, you have options online (or mobile) to choose the feed from either team’s local TV crew, a feed of four different angles on one screen or you can choose to watch from either baseline as if you’re watching from a courtside seat behind the basket. Those are all options that have been offered before in some capacity, but it’s something League Pass viewers may take advantage of more.

And maybe the best thing about the viewing experience was that with the score tied late in the fourth quarter between New Orleans and Utah, the suspense carried the moment. I forgot it was two teams inside a bubble playing with no fans in central Florida.

Eagle, on the call, said it well: “For me, it just feels like a tight NBA game on Thursday night on TNT. The NBA is back.”

This is also a work in progress, so that viewing experience we have early in the restart may not be the same in September. And it’s better than not having basketball on TV.