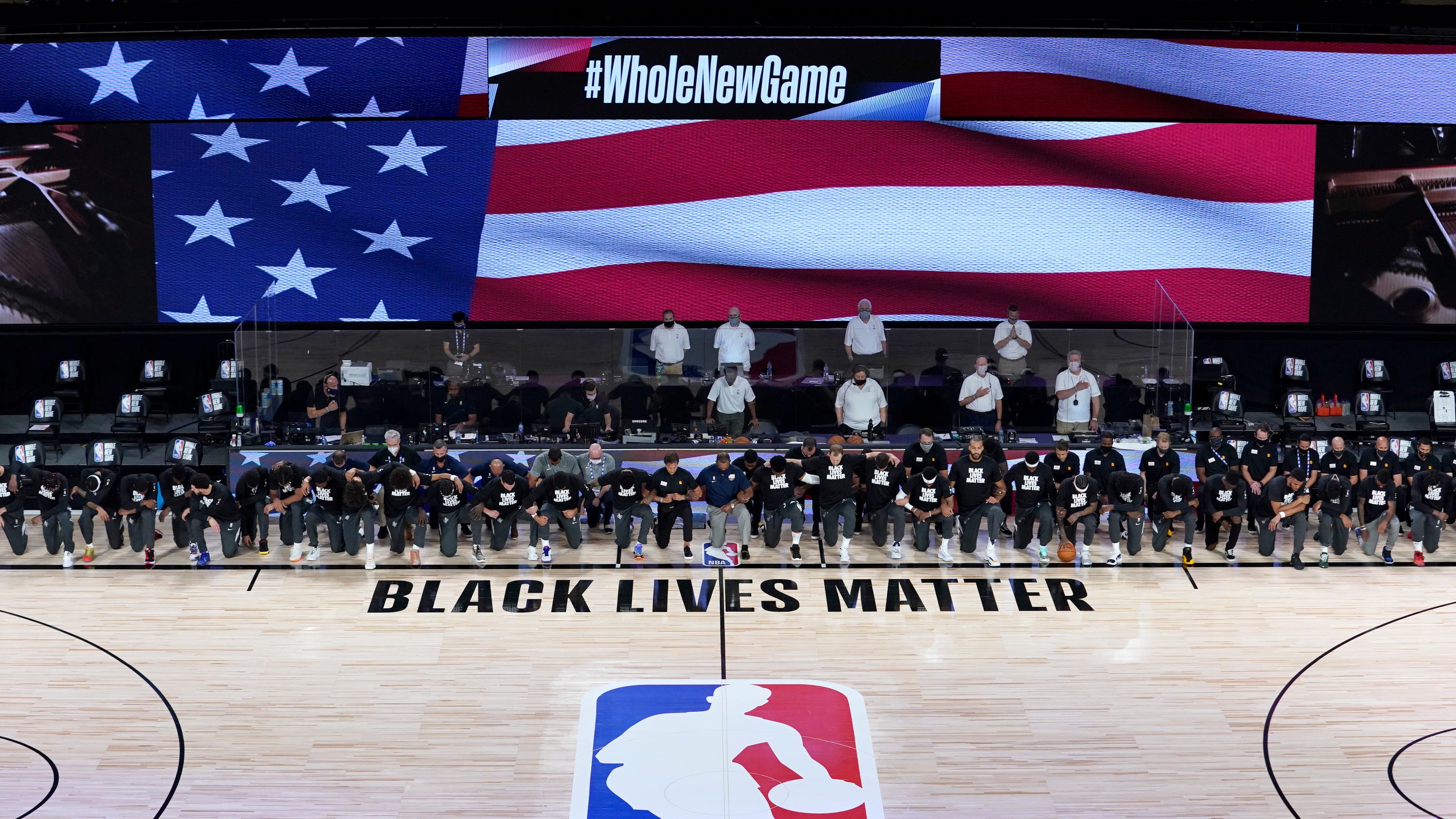 USA TODAY Sports talked to Charles Grantham, Director of Sports Management at Seton Hall, about how the NBA can impact policy change in America.

LAKE BUENA VISTA, Fla. — Before taking a shot, bouncing a ball or drawing up a play, the NBA’s players, coaches and referees performed another gesture that highlighted their aspirations go beyond resuming the season during the coronavirus pandemic.

All players and coaches with the New Orleans Pelicans and Utah Jazz wore “Black Lives Matter” shirts and locked arms while the NBA played a public service announcement about systemic racism. Then they all knelt during the national anthem to protest systemic racism ahead of their game Thursday at HP Field House at ESPN’s Wide World of Sports Complex.

Team staff members and officials joined them, too.

First, all Pelicans and Jazz players and coaches locked arms while the NBA played a PSA about systemic racism pic.twitter.com/hUXv92ThrJ

BURNING QUESTIONS: Will anyone topple the Lakers and Bucks?

OUR PICKS: Who will win NBA title? MVP?

Lakers, Clippers and officials lock arms and kneel together to protest systemic racism during the national anthem. pic.twitter.com/AGQbxYvyjJ

The symbolic gesture was the first time NBA players have kneeled during the national anthem since former NFL quarterback Colin Kaepernick began doing it four years ago. The NBA has a rule that states “players, coaches and trainers are to stand and line up in a dignified posture along the sidelines or on the foul line during the playing of the national anthem.” The league adopted this rule in 1981 and has enforced it since then. Given the circumstances in the USA as citizens protest social injustices, however, NBA players are using their voices to spotlight important issues.

The Pelicans and Jazz kneel for the national anthem before the NBA restart.

NBA Commissioner Adam Silver attended the league’s restart, and has said in past years that the league expects players, coaches and staff members to follow the rule. Not on Thursday, though.

“I respect our teams’ unified act of peaceful protest for social justice,” Silver said in a statement. ‘Under these unique circumstances will not enforce our long-standing rule requiring standing during the playing of our national anthem.”

Players from both teams also wore messages on the back of their jerseys ranging from “Black Lives Matter” to “Equality” to “I Can’t Breathe” to “Say Their Names” to “Education Reform” to “Ally” among other league- and union-approved messages. The Lakers’ LeBron James and Anthony Davis as well as the Clippers’ Kawhi Leonard kept their last names on their jerseys.

The Pelicans and Jazz kneel before the NBA’s restart opener in Orlando. (Photo: Ashley Landis, AP)

“We’ve had numerous conversations both as a staff and players independently and then our entire group together. We support our players and are anxious to participate along with them,” Jazz coach Quin Snyder said beforehand. “It’s so important at this point for us to be unified and to be able to peacefully protest many of the critical things going on in our country right now. So tonight there is an opportunity to do that and continue to draw and bring awareness to the many challenges and the struggles we’re all facing in terms of racial and social justice.”

National Basketball Referees Association spokesperson Mark Denesuk said in a statement, “BLACK LIVES MATTER. Social justice and bringing awareness to the inequitable treatment of black and brown people in America are very important to our diverse membership, and we felt a responsibility to use our visibility as the NBA season resumes to promote awareness and inspire anti-racist action in our nation and around the world.”

Earlier on Thursday, the NBPA tweeted, “While the season is back, our focus remains the same. #BlackLives Matter” with images that read “Breonna Taylor’s murderers still have not been arrested and … There are over 660K deaths worldwide due to COVID-19 and … Election Day is Tuesday November 3, 2020 and … voter suppression continues to deny the rights of BIPOC communities and … our fight will not stop.”