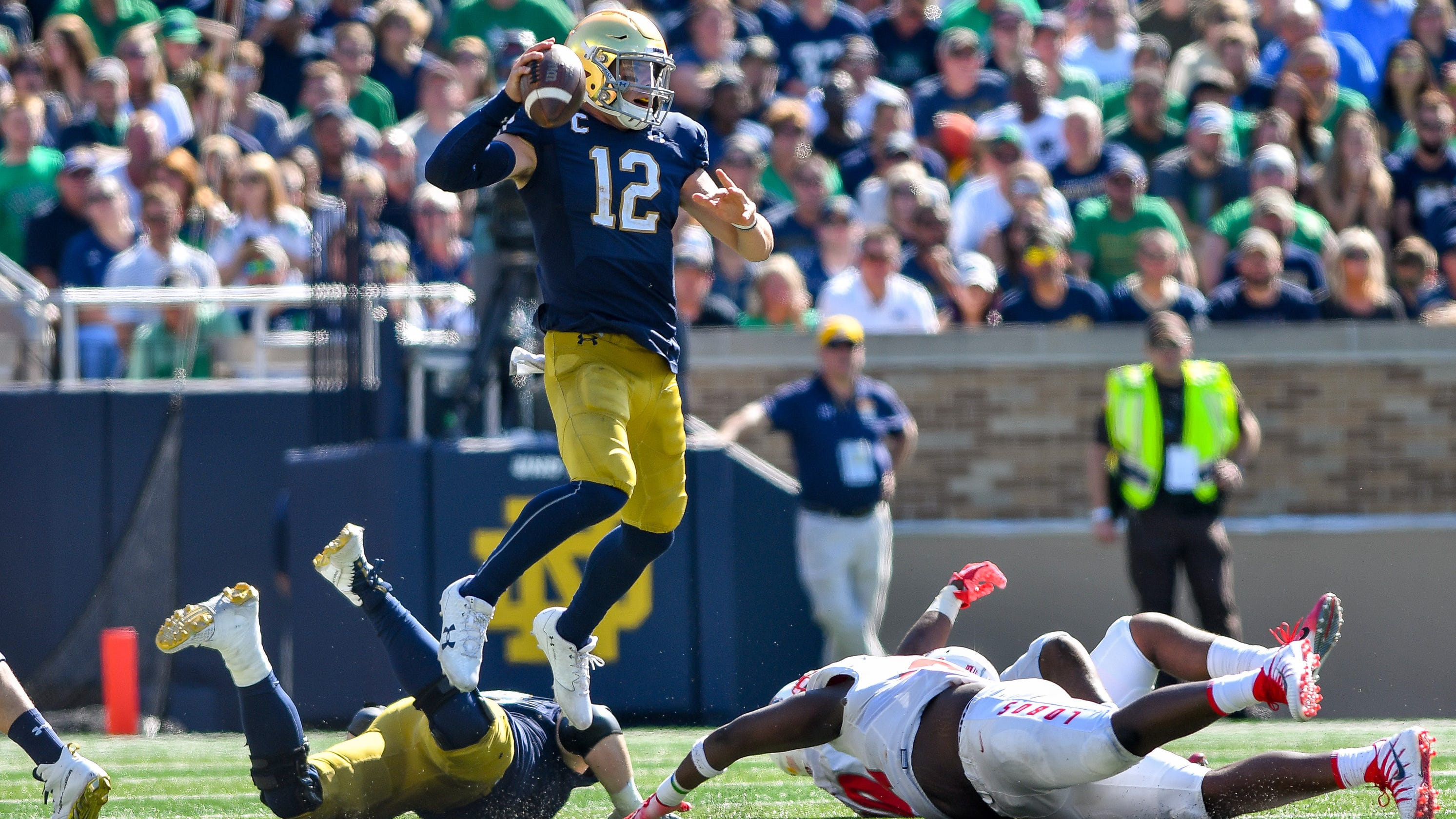 SportsPulse: Dan Wolken and Paul Myerberg discuss if there will be college football this fall. As Wolken put its, all it takes is one bad outcome due to the pandemic to send the sport into chaos.

Notre Dame football dipping its toe into history this fall includes details that have most of the rest of the college football world gawking, even if there’s still a trap door that could make it all go away.

What shouldn’t be lost in the Atlantic Coast Conference’s popup scheduling announcement Wednesday is that an Irish team with the potential to be the best of coach Brian Kelly’s 11 to date will have a path to prove it.

At least that’s what the snapshot looks like at the end of July.

The COVID-19 pandemic may eventually have other ideas. But if the pessimism about a season being played turns out to be overrated and Notre Dame is as good or better than advertised, the Irish will end up playing Clemson twice this season, with a split perhaps enough to coax the Irish into their second-ever playoff appearance.

The two teams will play at least once, and that game will be at Notre Dame Stadium, in a schedule reconfigured to 11 regular-season games and the Irish’s season commitment to ACC schools swelling from six opponents to 10.

The other home ACC games are Duke, Florida State, Louisville and Syracuse. On the road, the Irish are scheduled to face Boston College, Georgia Tech, North Carolina, Pittsburgh and Wake Forest.

“We’re excited about the opportunity the ACC has provided for our football program,” Notre Dame athletic director Jack Swarbrick said via a prepared statement. “We look forward to announcing our full schedule in the near future.”

There’s still a lot we don’t know. Specific dates for specific games. Who Notre Dame can/will play for its non-conference opponent. Whether there will be fans at any of the games. Whether sports in the United States in 2020 can endure outside a pandemic-resistant bubble.

What we do know, though, is intriguing — and no facet more so than Notre Dame being treated like a conference member in every way in the 15-team, no-division temporary setup.

That means the Irish are eligible to win a title, play in the ACC championship game and play in the Orange Bowl as the ACC rep instead of against it if the Irish just fall short of the football final four.

If I were Swarbrick, I would have taken the deal without the league title shot, but this way is a lot more fun and potentially impactful.

We also know the first games are scheduled the week of Sept. 7-12, says the ACC release, which means Notre Dame’s training camp likely gets pushed back to mid-August and after fall-semester classes start on Aug. 10. At least two bye weeks will be built into a regular season that’s set to end on Dec. 5.

The ACC championship game will be staged either Dec. 12 or 19 at Bank of America Stadium in Charlotte, North Carolina, a venue where the Irish were originally slated to play Wake Forest. The title game will feature the top two teams based upon highest conference-game winning percentage, well-crafted wording in that not every team might be able to play the same amount of league games.

Far down the revelvancy scale is a reality and a supposition that likely will remain media fetishes as long as this rebooted schedule stays intact.

The reality is Notre Dame will share the revenue from its NBC contract with the 14 other schools. In fact, all television revenue will be shared. So unless you’re a math lover, don’t get caught up in the optics.

The supposition — and those stories all already out there en masse — is that perhaps Notre Dame’s one year ACC run will be so enchanting it will convince the school to drop its independent schedule, identity and branding, and join the league in football full time in 2021.

Like a picky eater who tries broccoli for the first time and magically gives up ribs for the green stuff.

The last time Notre Dame tried to play football in a pandemic, its first-year coach didn’t get to play any games in October and ended up getting in only six total — and only then through some creative rescheduling — in an era when nine regular-season games was the norm.

The Irish went 3-1-2 that season, 1918, playing five games on the road. The next two seasons they didn’t lose a game.