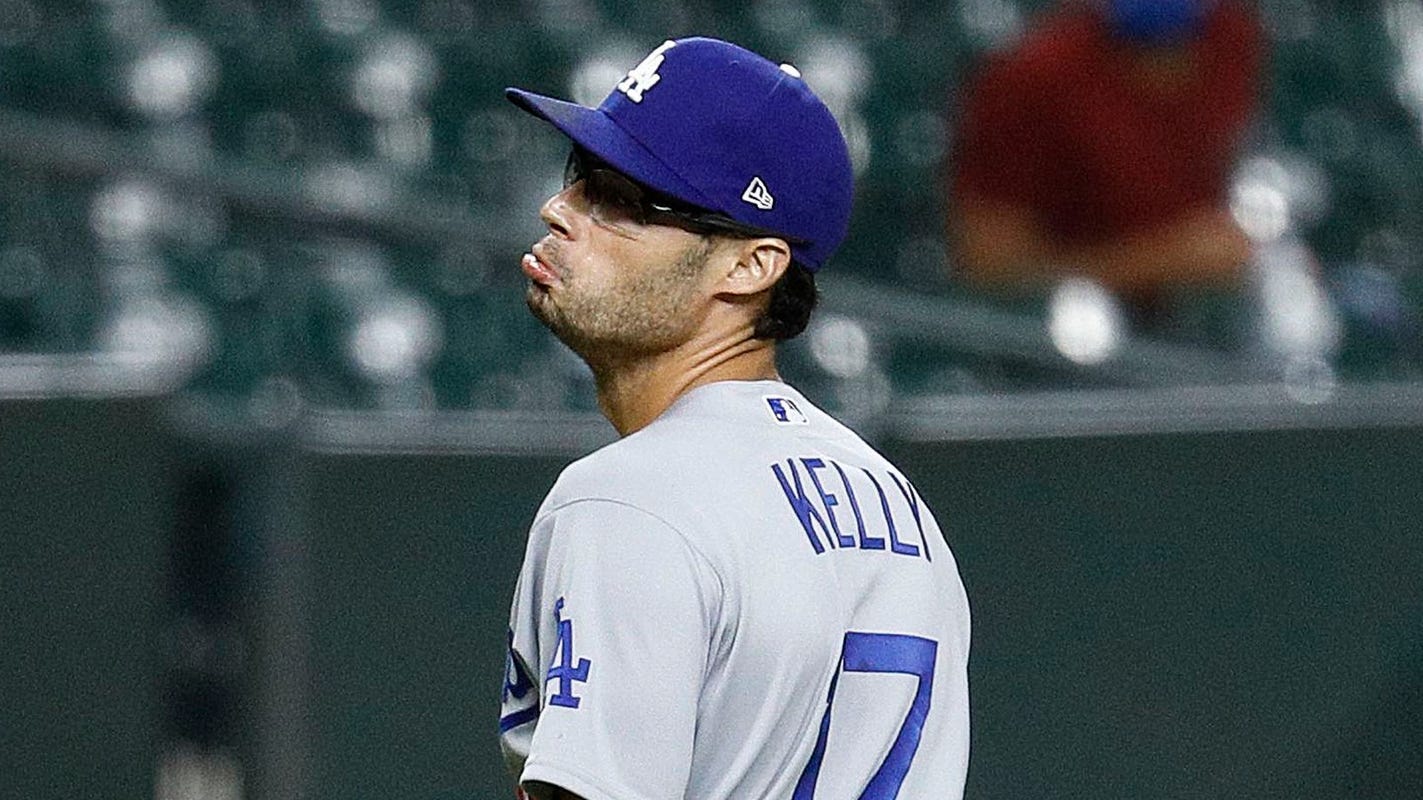 Dodgers reliever a folk hero in L.A. and baseball world

As of Thursday morning, there was no sign of a public fund set up to help Los Angeles Dodgers pitcher Joe Kelly in his appeal of an eight-game suspension handed down by Major League Baseball.

“It’s just a matter of time,’’ said Steve Mason, a longtime TV and radio broadcaster in Southern California. “Right now, he’s like the most popular guy in town.’’

Actually, Kelly might now be the popular guy in baseball.

Dodgers fans in particular were eager for payback heading into Tuesday’s game between the Dodgers and Astros in Houston. It was the first time the teams had faced each other since Astros players escaped discipline for violating Major League Baseball rules related to sign stealing  during the 2017 and ’18 seasons, which the former ended with the Astros beating the Dodgers in Game 7 of the World Series. And that moment arrived.

Bottom of the sixth inning.

He fired a 96-mph fastball behind the head of Astros slugger Alex Bregman; mocked shortstop Carlos Correa; precipitated a benches-clearing staredown; and sparked a notable hashtag.

After MLB announced Wednesday it was suspending Kelly — despite the pitcher’s denial he had intentionally thrown at the Astros players — a new hashtag quickly surfaced.

“Did Joe do something?’’Andrew Checketts, who recruited Kelly to the University of California at Riverside, asked with a laugh when reached by phone Wednesday. “He’s fun to watch.’’

For example, there’s the video posted online by Kelly’s wife in April that shows him in his backyard. Standing in front of a pitcher’s net, Kelly throws a ball that sails right of the net and crashes through a kitchen window.

A day after Kelly’s less-than-precise pitching against the Astros, Dodgers manager Dave Roberts was asked if Kelly was just playing a long con when he blew out his own window during quarantine.

“I don’t think that Joe is that far ahead of things,” Roberts said. “I just think it speaks to his ability or inability at times to not hit the target.”

But Kelly hit the target, all right, in his one-inning outing during a 5-2 victory that might go down as among the most relished in Dodger dog history.

“I love Joe Kelly,’’ tweeted Orel Hershiser, the former Dodgers pitcher who was a three-time All-Star and the World Series MVP in 1988.

Steve Garvey, the former Dodgers first basemen who was a 10-time All-Star, recalled full-scale brawls during his career but added of Kelly’s outing, “It’s kind of fun.’’

“Harmless, but a psychological stimulant,’’ he added.

VENGEANCE:Dodgers get upper-hand in series against Astros

The GIF moment is the pouty face Kelly wore after he struck out Correa. He also jawed at Correa, who struck out swinging, and Astros manager Dusty Baker said Kelly’s exact words were “Nice swing, b—-.’’

So of course T-shirts featuring those words quickly went up for sale through web sites like Dodgers Nation, run by Brook Smith. Less than 24 hours, Smith said, he’d sold 850 T-shirts at about $25 a pop.

No one seems to be having more fun than the Internet where, thanks for spoofers and photo-shop artists you can find a photo of Barack Obama placing the Presidential Medal of Freedom around Kelly’s neck; Kelly pushing a stroller occupied by a toddler-sized Correa; and don’t forget the Wikipedia fun. Or, as Wikipedia termed it, “vandalism.’’

After Kelly’s performance Tuesday, the pitcher’s Wikipedia included this addition: “He is also the father of Carlos Correa.’’

For the record, Kelly is actually the father of three young children and the husband of Ashley Parks, daughter of former Minnesota Twins catcher Derek Parks. A few other noteworthy facts on the back of his figurative baseball card:

A champ: Won a World Series ring with the Boston Red Sox in 2018.

DNA check: A distant relative of “Machine Gun Kelly,’’ the deceased American gangster. (At least that’s what it says in Joe Kelly’s college bio in the media guide at UC Riverside, where he played from 2007 to ’09.)

JoeKellyFightClub T-shirts went on sale in 2018 after Kelly hit Tyler Austin of the New York Yankees in the ribs with a pitch, triggering a benches-clearing brawl that left him trading punches with Austin.

During the six-game suspension for his part in that brawl, Kelly was photographed watching one of the Red Sox games from the bleachers at Fenway Park.

Kelly’s bio from the UC Riverside media guide offers some insight into the pitcher.

He listed “Bull Durham’’ as his favorite movie, and Kelly’s story bears faint resemblance to that that of the fictitious Nuke LaLoosh, the hard-throwing but wild pitcher in the film. Kelly mostly played outfield in high school.

“He didn’t pitch much for us because he couldn’t find the plate,’’ said Marty Wilkerson, a former assistant baseball coach at Corona High in Southern California. “He was an ornery little dude. I can live with that. Just always having fun.’’

The Nuke LaLoosh issues did disappear at UC Riverside, where he was converted from an outfielder to a pitcher as a freshman.

“He pitched with an edge,’’ said Doug Smith, then the head coach at UC Riverside. “So there were numerous near-confrontations.

“He’d get a little amped up. There’d be times he’d get the last out and he’d shout or he’d yell at somebody and it wasn’t always well received.’’

Fun if you can forgive and forget, that is.

Suddenly, Dodger fans are heaping praise onto Kelly as if they’ve forgotten about the 2013 National League Championship Series that pitted the Dodgers against the St. Louis Cardinals and Kelly’s role.

Kelly started Game 1 for the Cardinals, and with his eighth pitch of the game he hit then-Dodgers star Hanley Ramirez in the ribs, resulting in a hairline fracture. Ramirez’s performance suffered as Kelly and the Cardinals advanced to the World Series.

The Dodgers failed to reach the World Series in 2019 — in part because Kelly gave up a grand slam to Howie Kendrick that clinched the National League Championship Series for the Washington Nationals.

Yet all seemed to be forgiven on Tuesday night, with former Dodgers general manager Ned Colletti was among those praising Kelly for what was widely seen as pitches intended to intimidate the Astros.

“I loved it,’’ Colletti said on Dodger Talk, the team’s post-game radio show. “I thought it was great.’’

Clearly he is not alone.