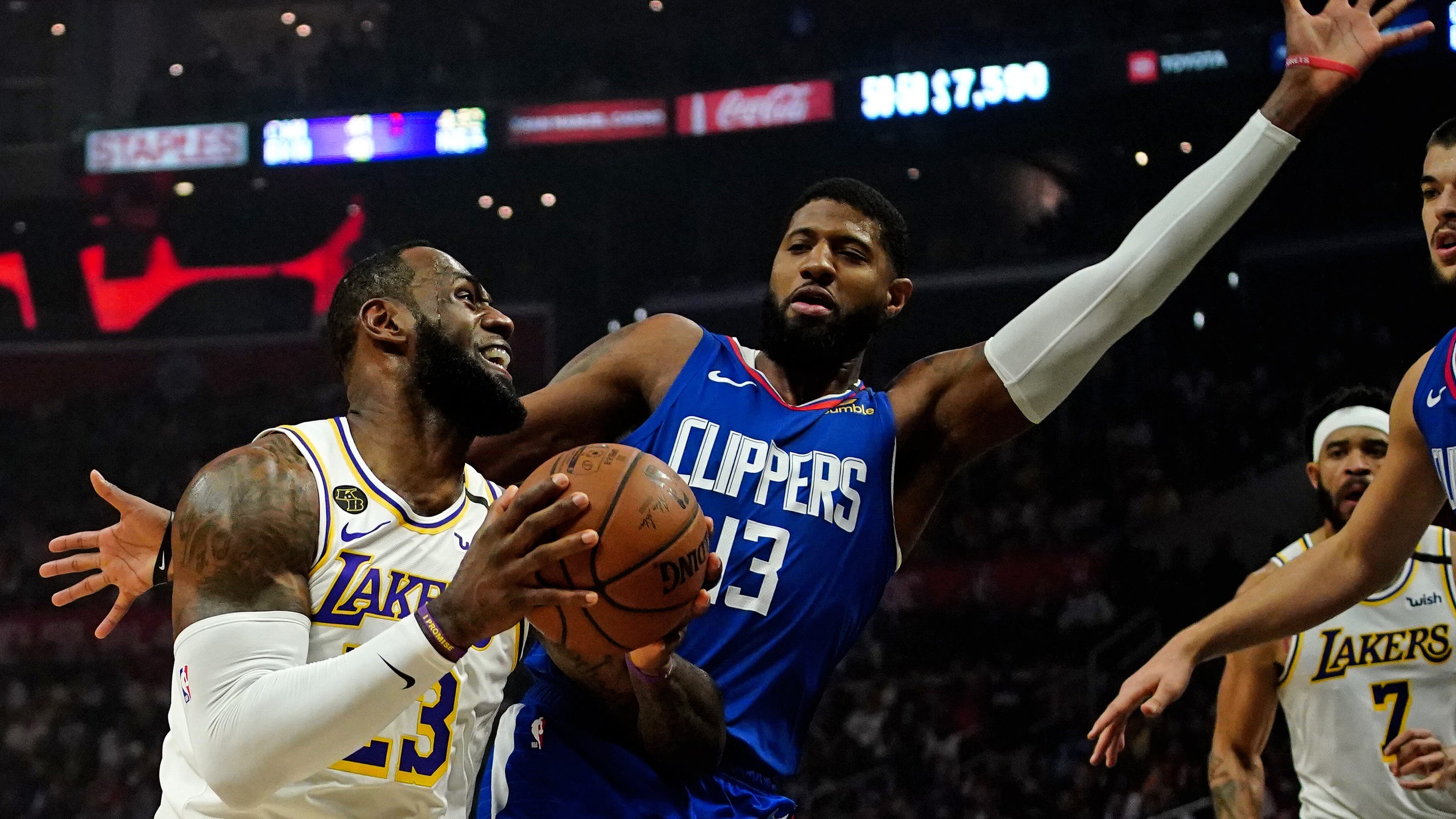 Burning questions as season gets back underway

After a four-month hiatus due to the outbreak of the novel coronavirus, the NBA — which shut down on March 11 after Rudy Gobert’s positive COVID-19 test — is set to restart from its bubble at Disney’s Wide World of Sports Complex in Orlando.

The action starts with two games Thursday. The Utah Jazz play the New Orleans Pelicans at 6:30 p.m. ET (on TNT). That game is followed by the Western Conference favorites — the Los Angeles Lakers and Clippers — squaring off.

USA TODAY Network experts reveal the burning questions that they want answered as the 2019-20 season restarts with the postseason to follow.

Back when he was a burly big man, Nuggets center Nikola Jokic contended he needed the extra pounds so he could play more physically inside. News flash: Jokic was joking. He had spent the 2019-20 season and the hiatus shedding that extra weight because he knew it did more harm than good. Today’s NBA requires its big men to be both physical and mobile, both dominant in the post and the perimeter. By trimming away at his body fat, Jokic maximizes the Nuggets’ chances to make a championship run. He has the potential to remain one of the NBA’s best post-up threats and passers, while having more speed both to protect the paint and to close out on the perimeter. That could also give him a leg up against opponents still struggling with their conditioning.

Can anyone upset Lakers or Clippers before West finals?

The NBA will have a wild, wild West after the hiatus put team chemistry and momentum to a halt. I’m still favoring the Lakers and the Clippers as the favorites, so long as their respective duos stay healthy in LeBron James, Anthony Davis, Kawhi Leonard and Paul George. I suspect they will since the hiatus helped all of those players heal varying injuries, and all accounts suggest they remained disciplined with their training and dieting during quarantine.

Nonetheless, every team’s depth chart is subject to change depending on injuries (Rajon Rondo), COVID-19 cases or breaking the NBA campus bubble rules (Lou Williams). Therefore, the Nuggets, Rockets, Jazz, Thunder and Mavs all have upset potential. Still, I’m choosing the L.A. teams because of their star players. I give the slight edge to the Lakers. James and Anthony have had more on-court time together. The Lakers also have navigated various speed bumps well, including the China training camp controversy, a new coaching staff, a new roster and the Kobe Bryant tragedy.

How far can the Rockets go with their small ball lineup?

The Rockets have the best chance to disrupt the Western Conference landscape for three reasons.

Houston knew it had a problem at its center position. So it essentially eliminated the position entirely when it traded Clint Capela to Atlanta in a four-team, 12-player trade that yielded Minnesota wing Robert Covington.

Sure, the Rockets have no one to stop James, Davis, Leonard, George, Milwaukee’s Giannis Antetokounmpo and Philadelphia’s Joel Embiid. Other teams don’t have enough defenders, though, from stopping Harden, Covington, P.J. Tucker, Eric Gordon, Austin Rivers and Danuel House Jr. to make 3-pointers. Not when they also have to worry about Westbrook in the open court. So yes, the Rockets have a good chance in relying on their math to win an NBA title, especially since teams will be out of shape to open the season.

NBA BUBBLE RESTART: Bucks, LeBron James among those with most to gain in restarted season

What can we expect from the Sixers?

Philadelphia was perhaps the most maddeningly inconsistent team during the first part of the season, from game to game and even quarter to quarter; dominant at home and awful on the road. Much of the focus was on Joel Embiid and Ben Simmons coexisting, but some lineup tweaks around the young stars might unlock a sluggish offense. Simmons has recovered from a back injury that opened the door for Shake Milton to flash his potential as a perimeter ball-handler. Early returns inside the bubble are promising with Simmons playing more power forward on offense and Milton assuming more traditional point guard roles.

The Sixers remain so fascinating because they still have one of the highest ceilings in the East and might still have to best chance of keeping the Bucks out of the NBA Finals. They are a terror defensively with their length and versatility, and when healthy and engaged, Embiid has the talent to be the best player in a series against just about anyone.

What will the basketball on the floor look like?

NBA Twitter had fun during the shutdown guessing who might come back out of shape. No one appears to have let himself go, but getting back into game shape is very different. A week of scrimmages gave players a start. Still, they’ll likely look a bit rusty in early seeding games as their legs return. Coaches, especially those of the top contenders, figure to gradually increase key players’ minutes to try to avoid the rash of soft tissue injuries that some European soccer leagues saw when they returned — strained groins and pulled hamstrings that can linger if not given time to properly heal.

Teams vying for the final playoff spots don’t have as much luxury to ramp up minutes. Each seeding game is vital for teams like the Grizzlies, Blazers and Pelicans in a heated race for the No. 8 seed in the West. How they manage workloads could be the deciding factor in who moves on to the postseason and who leaves the bubble early.

Can the Pelicans nab the No. 8 seed in the West?

It’s hard to imagine a below .500 Pelicans team being in 10th place in the West had Zion Williamson played the first 44 games of the season. And Williamson’s return to the NBA bubble after a family emergency is a breath of fresh air because it means New Orleans will have its future star to make a push for the No. 8 seed as a drastically different team that went 19-10 with its high-flying highlight reel and sported a top-10 offense and defense.

What’s important to realize about the Pelicans is that while Williamson is the sparkplug that helps this team tick, the franchise player is surrounded by a youthful and underrated nucleus that could bode well in the bubble format. Brandon Ingram, an All-Star this season, was arguably the most improved player in the league as a capable scorer with the game on the line. Lonzo Ball’s erratic jumpshot has steadily improved and his pass-first mentality is a key ingredient to this high-octane team in transition.

While the Trail Blazers and Grizzlies will be in the mix with similarly talented pieces, it’s New Orleans’ experience from veterans Jrue Holiday and JJ Redick that could be the difference-maker. In reality, New Orleans needs to leapfrog ninth-place Portland and then finish within four games of Memphis to force a play-in series, and that setup would undoubtedly favor the Williamson-led group.

NBA RESTART: Ranking the contenders for the West’s No. 8 seed

Can the NBA outrun COVID-19?

That has been the billion dollar question ever since the NBA decided to resume its season at a central location in a bubble-like atmosphere. It will remain the most important question until the NBA crowns a champion or once again suspends or cancels the season. The success of the bubble is incumbent on making sure there no are positive cases or keeping cases to a minimum, and that is dependent on daily testing and people following health and safety guidelines.

So far, so good. In the past two weeks of testing, not one NBA player has tested positive on the NBA campus. If the NBA can keep that going, this effort, which is no sure thing, will be a success.

Social justice and anti-racism messages will continue to remain focal points for NBA players, the National Basketball Players Association and the league. You will see this play out in a variety of ways, starting with nearly 300 players wearing a message on the back of their jersey and the phrase “Black Lives Matter” printed on the court.

It’s likely players kneel during the national anthem — something NBA players have not yet done — and they have had and will have ample opportunity to speak about issues with reporters. Voting rights, empowerment, justice for Breonna Taylor and George Floyd, police reform, education reform, reform to the judicial system and increased opportunities for people of color are among the topics that will be discussed.

Why isn’t anyone giving the Raptors a chance?

Toronto is the defending champ, it has a ton experience with Kyle Lowry, Pascal Siakam, Marc Gasol, Fred VanVleet, Norman Powell, Serge Ibaka and emerging young players OG Anunoby and Terence Davis, and it has a coach in Nick Nurse who might end up winning coach of the year this season. Even without Kawhi Leonard and Danny Green, the Raptors were on pace to win 58, 59 games this season. Toronto is 12th offensively, second defensively and fourth in net rating. That’s an equation that can equal a deep playoff run. The Raptors are not the favorites to win the East (they weren’t last season either), but they will enter any series, including one against Milwaukee, with confidence and ability.

What’s at stake for the Bucks?

As the team with the best record in the NBA heading into the restart, the Bucks’ championship window is undoubtedly open. However, no team can predict how long that window stays open, so winning now is of the utmost importance. With soon-to-be two-time MVP Giannis Antetokounmpo on the brink of an offseason in which he will be eligible to sign a supermax extension, winning now could also help to cement a future with Antetokounmpo as the cornerstone of the organization.

Should the Bucks bow out earlier than expected in the playoffs, though, cracks could begin to appear in the franchise’s foundation heading into an offseason unlike any other, throwing their goal of sustained contention into jeopardy. No team might have more at stake than Milwaukee, which lost to Toronto in last season’s conference finals after building a 2-0 series lead.