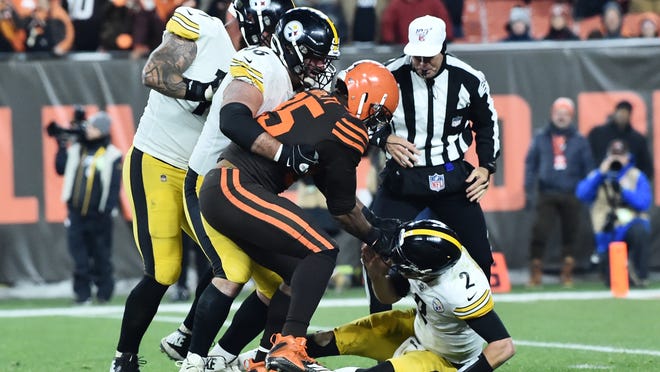 The NFL gave Garrett an indefinite suspension – lasting for at least the final six games of the 2019 season – after he ripped the helmet off Mason Rudolph and used it to hit the Pittsburgh Steelers quarterback over the head on Nov. 14 in Cleveland.

When the league doled out its punishments for the brawl, it stipulated Garrett would be required to meet with the commissioner’s office as one of the conditions of his reinstatement.

Where could Rivers land? Six NFL teams stand out as QB moves on from Chargers

On Nov. 24, a Browns source told the Beacon Journal the team expected the NFL to reinstate Garrett in time for the start of the 2020 season. All signs point to that happening.

There is officially no timetable for Garrett’s return. However, he has expressed remorse for his conduct, and his meeting with Goodell was a necessary step in order to get back on the field.

Garrett’s suspension ended the 24-year-old’s season and was a major blow for the Browns. They went 2-4 in the final six games without their sacks leader and finished 6-10.

Once Garrett is cleared, he’ll be able to take part in the Browns’ offseason program under new coach Kevin Stefanski. Garrett was allowed back at the Browns’ facility toward the end of the season to rehab an injury.

The No. 1 overall pick in 2017, Garrett has had an exemplary record since joining the league, and his actions toward Rudolph were uncharacteristic. He appealed his suspension, but it was upheld by independent officer James Thrash despite Garrett’s allegation that Rudolph used a racial slur.

Garrett’s attack on Rudolph came after the two wrestled on the field as the Browns were closing out a rare win over their AFC North rival, and it touched off a brawl involving several other players.

Steelers center Maurkice Pouncey received a three-game suspension – it was later reduced to two – for hitting and kicking Garrett, and Browns defensive lineman Larry Ogunjobi got a one-game ban for shoving a helmet-less Rudolph to the ground.

The league also fined the Browns and Steelers $250,000 apiece and handed out penalties to players for leaving the bench area and coming onto the field.

The Associated Press contributed to this report.