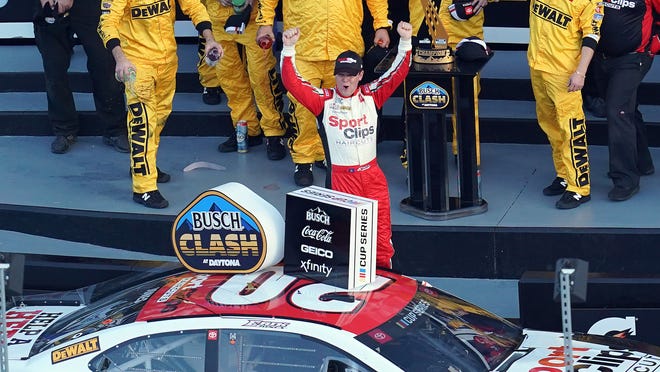 
Ricky Stenhouse Jr. will lead the field to the green flag Sunday at the Daytona 500 and put an end to an offseason that saw the biggest shift in his NASCAR career.

Stenhouse, entering his eighth full-time season in the NASCAR Cup Series, is with a new team (JTG Daugherty Racing), manufacturer (Chevrolet) and main sponsor (Kroger). The only remaining principal from his 2019 ride at Rousch Fenway Racing is crew chief Brian Pattie.

“Seeing all the hard work pay off is pretty cool,” Stenhouse said. “It’s been a lot. Just going to the shop and hanging out with the guys and walking around from the body shop to the chassis shop and suspension rooms and electrical rooms just meeting everyone and getting familiar with everyone. It’s been beneficial having (Pattie) and a couple others come over with me and help that transition.”

Stenhouse joked that the lap that put him on the pole for Sunday was the fastest he’d ever run in a Chevrolet. The 32-year-old Olive Branch, Mississippi native had always driven a Ford since joining the NASCAR national touring series in ARCA competition in 2008.

Stenhouse’s deal with Rousch Fenway Racing ended a year early when he was cut to open a spot for Chris Buescher. In the end, he and Buescher ended up swapping rides.

For his part, Stenhouse said the move to JTG Daugherty Racing has re-energized him. Of course, it helps when your first lap of consequence in a new ride ends in being on the pole for the biggest race of the season.

“It was a great start, definitely thrilled about it,” Stenhouse Jr. said. “It’s been an offseason that’s had a lot of news. New people, new team, new manufacturer and new partners. Obviously, The Kroger Company has been a big part of what we do at JTG Daugherty Racing, so I really appreciate everything they’re able to help us accomplish. They’ve been behind the program for a long time and to work this hard this offseason and see those results immediately show up on the race track has been pretty fulfilling for me as a racecar driver.”

OPINION:2020 Cup Series rookies could be best class in 40 years

So far, so good with Chevrolet

While there’s an entire season yet to unfold, Stenhouse’s first days behind the wheel of the Chevrolet Camaro ZL1 are promising.

Stenhouse’s No. 47 Camaro turned in the second-fastest speed in Saturday practice at 203.192 mph. He then qualified fastest at 194.582 mph on Sunday.

JTG Daugherty Racing gets its engines from Hendrick Motorsports, which powered the top four qualifiers on Sunday.

Trying to break the 20-year streak

The last polesitter to win the Daytona 500 was Dale Jarrett in 2000. While being on the pole matters a lot less at superspeedways than other tracks on the Cup Series schedule, it’s still a good spot to be in.

Stenhouse wouldn’t give away his plan for Sunday’s 62nd running of the Daytona 500, but he’s obviously not going to complain about starting at the front of the 40-car field.

“Aw, man, they said that – 20 years ago,” Stenhouse said. “Hopefully we can knock that stat off of there and redo it – restart that drought.”

Daytona is one of the two tracks Stenhouse has won at in the Cup Series. The other one is Talladega. He won both of those races in 2017 and hasn’t been able to get back to victory lane since.

If this is the year the polesitter curse is broken, it would certainly be as good a start as possible for Stenhouse and his new team. JTG Daugherty Racing’s only Cup Series win came in 2014 on the road course at Watkins Glen with A.J. Almendinger behind the wheel.

“We’ve got a really fast Kroger Camaro,” Stenhouse said. “I think we’re in a really good position with the speed that we have in the car to go out and get the job done.”