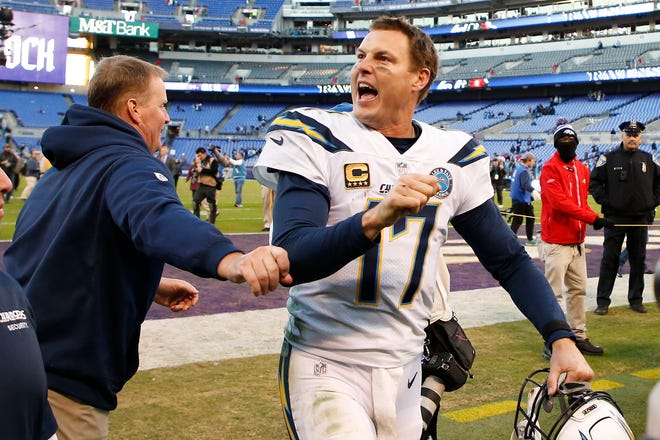 
The NFL’s 2020 free agency period could trigger quite a game of musical chairs among several of the league’s quarterbacks – some established stars and others at least noteworthy.

But Brady’s future is already causing rampant speculation, the Chargers shaping up as a prime option if he leaves New England given the Bolts’ base in TB12’s native California and urgent need for a marquee attraction – especially now that the organization’s divorce from Rivers is official. Brady could definitely kick-start ticket sales as the team prepares to move into its sparkling new SoFi Stadium stadium while still trying to establish a foothold with fans in Los Angeles after three seasons of hosting teams that have typically drawn more support in a temporary suburban soccer stadium.

That brings us to Rivers.

Hard to picture a man who’s spent all 16 of his NFL seasons wearing the lightning bolts in a different color scheme. But that’s now reality after he struggled in 2019, ultimately a highly disappointing campaign for the underachieving Chargers … and in a year when Rivers’ notable 2004 draftmates – Ben Roethlisberger and now-retired Eli Manning – also began careening toward their own football mortality.

Mike Jones:NFL’s quarterback landscape could be headed for seismic shift this offseason

But even with Rivers recently relocating his family from San Diego to Florida, in order to be nearer his Alabama roots, there are a few spots that could still make sense for him personally and professionally. Here are six:

Carolina Panthers: Cam Newton’s outlook is murky given his injury-curtailed 2019 season, a contract that runs out in a year and a new coaching staff. Kyle Allen won four consecutive starts after stepping in for Newton but then struggled mightily. Rookie Will Grier was dreadful in two starts. The rumor mill is already up and running as it pertains to the Panthers and Heisman Trophy winner Joe Burrow, who spent his final season at LSU working with newly hired Carolina offensive coordinator Joe Brady. Whether or not that reunion actually materializes, this franchise could find itself in need of a stopgap. Rivers could distribute the ball nicely to an assortment of targets – RB Christian McCaffrey and WRs DJ Moore and Curtis Samuel – who thrive while running after the catch.

Dallas Cowboys: An extremely remote option given Prescott’s progress and team’s relative remove from Florida. But free agency can engender unexpected outcomes, and if Prescott potentially refused to sign a franchise tag and went full Le’Veon Bell … well, a team constructed to win now might quickly find itself interested in a capable veteran.

Indianapolis Colts: Similar to Dallas, this would not be especially convenient as it pertains to Rivers’ family priorities. However he knows Frank Reich, who served as his position coach and offensive coordinator from 2013 through 2015 in San Diego, very well. And playing in the AFC South would at least make it easier for Rivers’ loved ones to conceivably travel to games. This team appeared poised to win big just six months ago, ready-made for deep playoff runs orchestrated by now-retired Andrew Luck. Rivers isn’t Luck, but he could probably be a far more potent performer than Jacoby Brissett or Brian Hoyer if protected by a first-rate offensive line with capable RB Marlon Mack lining up behind him. And he might welcome playing in a domed building with California-perfect passing conditions.

New Orleans Saints: Brees, whom Rivers backed up in San Diego once upon a time, has yet to reveal whether he’ll return for a 20th NFL season. Even if he opts for retirement, Bridgewater, still only 27, seems like the logical fallback given he went 5-0 in 2019 while Brees recovered from a torn ligament in his throwing thumb. But again, free agency can be a wild card, and if both Brees and Bridgewater leave, will a veteran-laden team really go all in with Taysom Hill? He’s a dangerous multi-purpose weapon (64 runs, 22 receptions since 2018) but has only thrown 13 regular-season passes.

Tampa Bay Buccaneers: Perhaps the most logical destination given they play in Florida and don’t appear wed to Winston, who led the league with 5,109 passing yards in 2019 … and also with 30 interceptions. In the aftermath of a 7-9 season, head coach Bruce Arians was in no mood to praise Winston, quipping about the possibility of a change under center: “Another quarterback? Oh, yeah. (If) we can win with this one, we can definitely win with another one, too.” Ouch. Arians has done some of his best work with veterans like Roethlisberger and Carson Palmer. Rivers has never had the arm strength to optimally execute Arians’ beloved “No risk it, no biscuit,” philosophy. But he’s historically been an effective deep-ball thrower, unleashing plenty of bombs over the years to Keenan Allen, Mike Williams, Vincent Jackson, Malcom Floyd and others while leading the league in yards per attempt three times. Little reason to believe Rivers couldn’t do the same with star WRs Mike Evans and Chris Godwin. Heck, maybe he could even figure out how to maximize disappointing TE O.J. Howard after so many productive years with Antonio Gates.

Tennessee Titans: They could have quite a quandary on their hands. NFL comeback player of the year Tannehill was the catalyst for their wild-card run, going 7-3 after replacing Mariota and posting an eye-popping (and league-leading) 117.5 QB rating. He certainly appears to be the best option for a team that fell one game shy of the Super Bowl and is nearly seven years younger than Rivers, 38. But if GM Jon Robinson can’t get any extensions done ahead of time, would the Titans really franchise Tannehill instead of RB Derrick Henry, the man who primarily fueled their unexpected playoff surge? Seems unlikely. And if Tannehill winds up being wooed by another suitor in free agency, what’s Plan B for a team now picking 29th in the first round? The Titans could certainly do much worse than having Rivers shoot up to Nashville in order to hand off to Henry … and occasionally throw to YAC guys like WRs A.J. Brown, Corey Davis and Adam Humphries and TE Jonnu Smith.