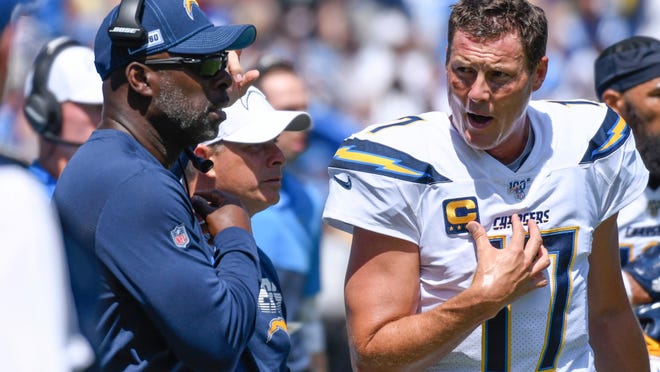 
The Los Angeles Chargers confirmed what had recently become fairly obvious – Philip Rivers is no longer their quarterback.

After 16 seasons with the franchise, most of it spent in San Diego, Rivers and the team mutually confirmed that his run with the Bolts is done and that he will enter free agency next month.

“I am very grateful to the Spanos family and the Chargers organization for the last 16 years,” Rivers said in a statement. “In anything you do, it’s the people you do it with that make it special. There are so many relationships and memories with coaches, support staff and teammates that will last forever, and for that I am so thankful.

“I never took for granted the opportunity to lead this team out on to the field for 235 games. We had a lot of great moments, beginning in San Diego and then finishing in LA. I wish my teammates and coaches nothing but the best moving forward.

“I’m not sure what the future holds, but my family and I look forward to seeing what God has planned for us next.

Rivers, who was drafted by the New York Giants in 2004 before his rights were sent to the Chargers in a deal that included Eli Manning’s rights, holds more than 30 team records. He is the Chargers’ all-time leader in wins (123), passing yards (59,271) and TDs (397).

Since replacing Drew Brees as the starting quarterback in 2006, Rivers never missed any of his 235 possible starts, the third-longest streak in the NFL since the 1970 merger behind Hall of Famers Brett Favre and Bruce Matthews.

“I’ve said before that Philip can still compete at a top-starter level and, in a perfect world, number 17 is your quarterback forever,” said GM Tom Telesco. “Obviously, we live in an imperfect world where the only constant is change. I think Philip’s tremendous perspective, both when it comes to football and when it comes to life, helped lend clarity to a very complex situation.”

Rivers, 38, saw his numbers suffer in a highly disappointing 2019 season, one in which he was intercepted 20 times and the team finished 5-11.

With the Chargers preparing to move into glittering new SoFi Stadium, the team is clearly looking to reinvent itself as it tries to compete with the Rams in Los Angeles’ highly segmented NFL market. Speculation continues to swirl that the Bolts could pursue another free agent quarterback – maybe Tom Brady? maybe Jameis Winston? – and/or select a young passer with the sixth overall pick of the 2020 draft.

But Rivers’ legacy will endure.

“There’s only one Philip Rivers, and we’ve been fortunate to call him our QB1 for the better part of two decades,” said Chargers owner Dean Spanos. “We cannot thank Philip enough for giving it his all on every single down and for the memories he created that will last a lifetime.”