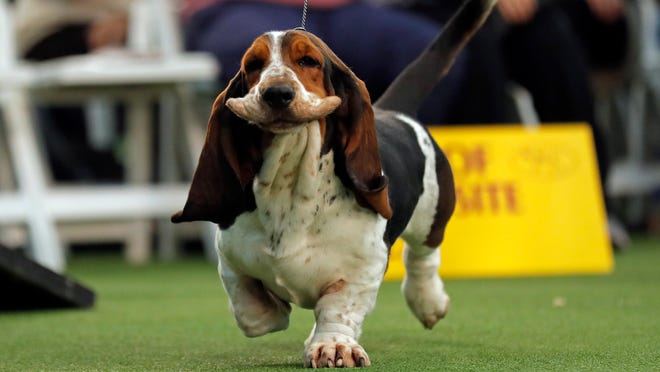 What to expect during Best in Show events

Events began on Saturday with the Masters Agility Championship, which was won by a Border Collie from Ohio named P!nk — after the pop singer, and yes, with an exclamation point — who navigated through man-made obstacles to complete the course in 29.35 seconds. The Collie held a commanding lead over an Australian Shepard named Lili Ann, the next-closest finisher at 35.04 seconds.

Sunday’s Masters Obedience Championship, which judges the bond between dog and owner, was once again won by a dominant Labrador Retriever from New Jersey named Heart, who has taken home the crown in each of five years since the event was added to the Westminster schedule.

But dog lovers and aficionados are focused on the Best in Show portion of events. More than 200 breeds are separated into seven groups, with one dog coming out of each group to reach Tuesday evening’s championship. This portion of competition — the dog Oscars, basically — is historically dominated by the terrier group, which took first place a year ago and dwarfs all other groups with 47 wins.

Monday features judging of the hound, toy, non-sporting and herding groups. Sporting, working and terrier groups will be evaluated on Tuesday in advance of the Best in Show finals. Judges have already started breaking down the field by selecting the winner of each breed. Here’s what to expect from the best of the best in the dog world:

The most recent hound to win Best in Show was a Beagle named Miss P, who took home the honor in 2015. It’s been a solid decade-plus for the group, which also won in 2008 (Beagle) and 2011 (Scottish Deerhound) — the 2008 winner, Uno, was Miss P’s great-uncle. This group produced one of the favorites of last year’s Best in Show portion of competition: Burns, a Longhaired Dachshund, endeared himself to judges and fans and nearly became the first of the Dachshund breed to take home the top honor. This year, Bourbon the Whippet is the favorite to come out of the hound group and one of the top overall contenders for Best in Show.

These small dogs have a stellar track record when it comes to Best in Show, taking home back-to-back wins in 2012 (Pekingese) and 2013 (Affenpinscher) and winning 11 times overall. Keep an eye on one grey-and-white Havanese in particular: Bono finished second at last year’s show and is back to take the next step into canine history. Dog News Magazine named Bono this past December as the nation’s top-ranked canine.

This group had gone 16 years without a champion until Flynn the Bichon Frise was named Best in Show in 2018. Historically, the best bet to rise from the non-sporting group are the Miniature Poodle and Standard Poodle, though a Schipperke, Colton, did come out of the pack a year ago. This group includes Bulldogs, French Bulldogs and Dalmatians, breeds which may rank among the most easily identifiable in competition but have combined for only one Best in Show win.

In terms of taking home Best in Show, this is the least successful of the seven groups. That’s largely due to the group’s relatively brief history; the herding group was formed in 1983 and has won twice, most recently in 2017, both times with German Shepard Dogs. (The Old English Sheepdog and Rough Collie won Best in Show before being transferred into the group.) This year’s best of breed among German Shepard Dogs, Marquis’ Hermes V Kenlyn, finished third overall in this group in last year’s competition. Keep an eye on the Bouvier des Flandres and Border Collie, winners of the herding category in the past two years.

Retrievers, Setters and Spaniels of all kinds dominate the sporting breeds, making this the group most likely to resonate with the everyday dog owner. It’s safe to bet on the Spaniels: English Springer and American Cocker breeds have combined for 10 of the group’s 18 overall wins, though the most recent Best in Show winner to come out of the group was a German Shorthaired Pointer in 2015. The beloved Labrador Retriever has been America’s most popular breed for the past quarter-century but has never been named the best of this group.

This includes the big dogs, including the Great Dane, Siberian Husky and German Pinscher, among other breeds. In a competition that seemingly favors grace and balance, it would seem that the working group would be at a disadvantage. That’s been the case in recent history: breeds from this group haven’t won Best in Show since 2004, though the group does account for 15 wins overall. (The group’s heyday came during a period of five wins between 1970-89.) Wilma the Boxer should be seen as the group’s overall favorite; Boxers have been named best of breed in two of the past three years.

In terms of winning Best in Show, the most prolific breed is the Wire Fox Terrier, which won last year and has 15 wins overall. Which breed is second among wins? That’d be the Scottish Terrier, with eight. Yet while Terriers dominate on a historic level, a good portion of those wins came in the early days of Westminster — beginning in 1907 with Warren Remedy, the only dog to have won three times in a row, Terriers claimed Best in Show in 12 of the first 14 years of competition. In other words, it may be any dog’s game. But this group will be a major factor.