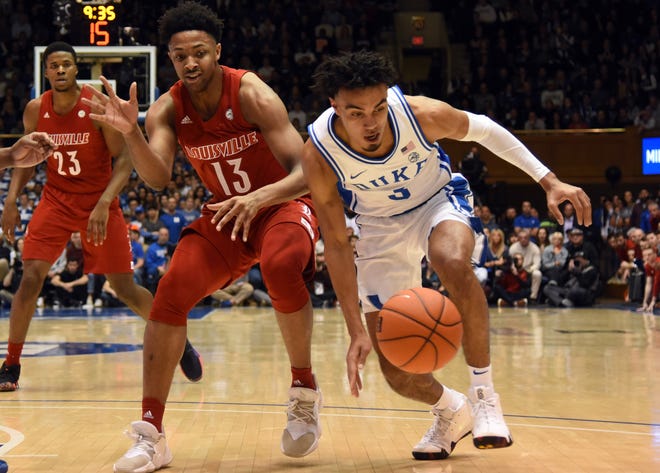 
The ACC is historically bad this season.

The league that had three No. 1 seeds last March only has four teams with the credentials to make the projected NCAA tournament field. Usual power North Carolina (10-13) is one loss away from last place in the 16-team league, defending national champion Virginia is on the bubble and the conference ranks sixth among seven power conferences in the NCAA’s NET rankings.

So what does this all mean for the league’s top two teams — Louisville and Duke? It means both teams, currently projected as No. 2 seeds, have little room for error. For instance, if the Blue Devils would have lost a road game to archrival North Carolina on the weekend, it would have qualified as a  bad Quadrant 2 loss. Should they lose to UNC at home March 7, that would be an even worse Quadrant 3 loss.

It also leaves less room for bolstering a résumé compared to the Big 12, where both Baylor and Kansas are the bracket’s top No. 1 seeds.  It get interesting if San Diego State and Gonzaga, two teams leading mid-major leagues, falter to open the door. Duke and Louisville would also have to fend off fellow No. 2s Seton Hall and Dayton, but it’s a strong possibility one leapfrogs to the No. 1 line.

The Cardinals have an impressive NCAA tourney portfolio but as of last week were hovering at the No. 4 line because they only have three Quadrant 1 victories. By comparison, Kansas has 10. Duke also only has three Q1 wins. Both need to acquire more to make a case for a No. 1 seed, with the ACC tournament being a potential determining factor of which team has the best case come Selection Sunday.

Note:  Mostly all statistical data is used from WarrenNolan.com. The NCAA’s NET rankings are also a reference point.

About our bracketologist: Shelby Mast has been projecting the field since 2005 on his website, Bracket W.A.G. He joined USA TODAY in 2014. In his seventh season as our national bracketologist, Mast has finished as one of the top three bracketologists in the past six March Madnesses. He’s also predicted for The Indianapolis Star, collegeinsider.com and is an inaugural member of the Super 10 Selection Committee. Follow him on Twitter @BracketWag.