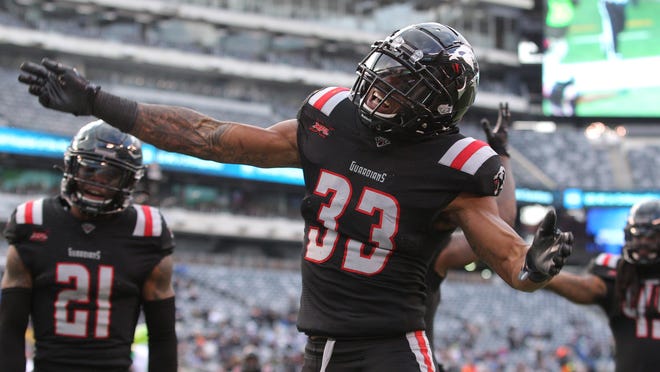 
EAST RUTHERFORD, N.J. — In Section 104 on the lower concourse, they were celebrating.

From right to left, Pete Paguaga, Peter Mingione, and Nick and Anthony DuBartell, were watching the first drive of the XFL’s New York Guardians. They were sharing chicken tenders and fries and a few beers. The four friends figured, one way or another, they would witness football history.

“I had a day off and so I called Anthony down at the end, and he’s starting a new job,” Paguaga told USA TODAY Sports in between sips of a beer. “Peter’s wife is away for the weekend, so it’s a #Katiefreeweekend. Whether this league succeeds or fails, it’s history, right? It’s either the first game of a successful league, or it’s the first game of a league that fails in a year. We’re all sports fans. So we just figured: ‘Why not?’”

5 THINGS WE LEARNED FROM XFL’S OPENING GAME:Trading gimmicks for innovation was wise

NEWSLETTER:Sign up now to get football news delivered to your inbox

On this cool, partly cloudy Sunday, there was a measured enthusiasm coursing through the stadium, football-thirsty fans optimistic that a spring league could flourish amid a history of failed attempts and aborted plans. The challenge is to become a developmental, professional league against the juggernaut of the NFL. Fans seemed eager to accept the XFL and its transparency the NFL never will provide, its deviations in rules and mic’ed up player huddles.

The product is different. The players are either NFL wash outs, those who had been overlooked, or those who perhaps faced an unfortunate injury history. But it was still football.

And in the midst of a dominant 23-3 Guardians victory against the Tampa Bay Vipers, fans cheered big plays, booed when an opposing player was ejected and soaked it all in.

“Once we decided we were going to go to the game, I was like, we gotta buy shirts,” Paguaga said after a laugh. “So I bought us all the same exact shirt.”

There they sat, in Section 104, seemingly in uniform, dark grey T-shirts draped over their jackets and sweatshirts. Scenes like this were present all across the stadium, where fans clung to a nascent loyalty to a team they just met.

Guardians quarterback Matt McGloin, who played at Penn State and spent time with the Oakland Raiders, completed 15 of 29 passes for 182 yards with one score, to receiver Coby Pearson. New York’s defense flustered the Viper offense, forcing them into four turnovers, including a pair of turnovers on downs in the fourth quarter.

Just minutes before kickoff, fans stuffed a team store in the lower concourse. It was a small space, about 30×20 feet, with shelves holding hats, sweatshirts, pennants, replica jerseys and branded drawstring bags. It was standing room only. There were no lines in front of the three cash registers; the mass just waited and gradually inched closer until it was their self-policed turn to checkout, like liquid thinning through a funnel.

“This is madness,” an exasperated woman said as she left without buying any merchandise. “I’ll come back later.”

“Ninety bucks for a jersey that there’s a 75% chance may or may not be worthless at the end of the year?” said a man after eyeing the price tag of a No. 20 replica jersey of Guardians running back Tim Cook III. “I might just look for it online.”

Friends Matthew Kulper, Colin Corley and Julian Dimagiba were waiting as Corley was set to buy a hat. Kulper had been eyeing a sweatshirt, but then returned it to the rack.

“We’re super die-hard wrestling fans,” Kulper told USA TODAY Sports. “But we were also super die-hard XFL fans when it first came out in 2001. It has been two years since Vince McMahon announced the second iteration. And, I don’t know, something about the second coming, you really saw there was a lot of thought put into this. A lot of high hopes, man.”

“A bit of the appeal for me,” Corley added, “is just because we are such big wrestling fans, we were hoping there would be less pro wrestling integrated this time and that it would be actual football.”

About 45 minutes before kickoff, fans trickled into the lower bowl of the stadium. Guardian quarterbacks stood near midfield as receivers, running backs, tight ends, cornerbacks and safeties streaked downfield, while the passers lofted throws down the field to warm up.

A fan in the front row with a New York Jets hooded sweatshirt and a roster sheet served as a hype-man. Each skill position player who caught a pass heard his number called with glee. Then, when the player turned around to reveal the last name on the back of his jersey, the fan would howl that, too.

There was receiver Mekale McKay: “Yeah, No. 1. We want big plays all day. Yeah, McKay.”

Then came running back Darius Victor, who once spent time on the Arizona Cardinals’ practice squad: “We see you, 27. We see you. Yeah, Victor.”

Then came No. 22, safety Dravon Askew-Henry, who played at West Virginia: “Two-two, the double deuce! Double deuce.” When Askew-Henry turned around, however, the fan broke from pattern. “Aw, hell,” he muttered. “That name’s too long.”

Paying fans crowded the lower bowl, with no tickets available for the mezzanine and upper decks in the stadium. Fans, in particular, clustered behind the end zone, where the cheaper tickets were available.

“We paid 50 bucks each for these,” Paguaga said. “And we bought them today. I’ll tell you one thing, the seats are better than if I were going to a Giants game, though.”

According to a Guardians spokesperson, 17,634 fans attended the game.

“I think it has been fantastic,” Kulper said. “I think being here today has been a real eye-opener. We didn’t know what to expect coming into this huge stadium. We’re surprised.”