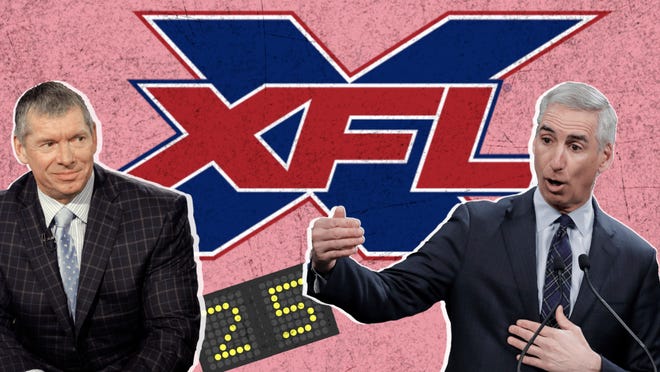 
WASHINGTON — Oliver Luck ascended the steps that lead to the locker rooms at Audi Field more than two hours before the XFL kicked off its inaugural season Saturday wearing a blue tie and a smile.

Nearly two years of work had gone into relaunching a once-failed professional football league, so no one would blame the XFL commissioner for being a little anxious on the day the DC Defenders defeated the Seattle Dragons 31-19.

Instead, the silver-haired Luck had a zen to him: his work was done. It was up to the product on the field now to convince football fans across the country that another football league is worth investing time into.

And after one game, albeit imperfect, it appears Luck, founder Vince McMahon and the rest of their partners achieved that goal. Here are five things we learned from the XFL’s opening game:

The most famous aspect of the XFL’s first iteration was “He Hate Me.” But such gimmicks are not going to cut it in this XFL, and that’s a good thing.

Instead, the new XFL is trying to differentiate itself — and therefore captivate — through more subtle innovations. The running clock is a good idea and works well. One referee dedicated to spotting the ball helps offenses go faster. The kickoffs will always look weird, but the first time a returner hits a seam and has nothing but daylight in front of him will be worth it. Even a replay delay felt somewhat refreshing because the extra time led to the right result.

The harsh special teams rules that discourage touchbacks or kicking the ball out of bounds on punts will force coaches to reckon with going for it on fourth down in their own territory but not quite the red zone. That occurred Saturday when DC Defenders coach Pep Hamilton kept his offense on the field for a 4th-and-6, and quarterback Cardale Jones connected with Rashad Davis for a 31-yard, go-ahead touchdown.

Those decisions will lead to more scoring opportunities that give the game a more enjoyable back-and-forth feel.

These players know they are on their second (or sometimes) third chances at playing professional football. The goal is to make it in the NFL. But this league offers an opportunity to not only serve themselves but create a space for future players to attempt comebacks, and that’s not lost on them.

Rahim Moore, who picked off the Dragons’ Brandon Silvers for the new league’s first interception, has five years of NFL experience and played in the Alliance of American Football, the equally ambitious but already-failed XFL counterpart. He said the speed of the game was similar to that in the NFL.

“I love the AAF. It was a great experience,” Moore said, “But it was a little slow. This game, it felt like a NFL game.”

There were special teams miscues (the Defenders scored on a blocked punt recovered in the end zone). Kicker inconsistencies popped up, with Defenders kicker Ty Rausa — who scored the league’s first points with a field goal in the first quarter — missing from 34 yards away and then connecting from 55. Refs handed out unsportsmanlike conduct penalties and made bad calls and poor spots all the same.

Rushing attacks will likely struggle, especially in the early part of the season. Talented offensive linemen are tough to come by even in the NFL.

“At the end of the day it’s still professional football,” Jones said. “You’re still playing with some amazing players. These guys are getting paid to play football. … Only thing different is you’re playing in a different time of year.”

Bradley Slyve’s pick-six sealed the game for the Defenders, and the stadium’s atmosphere teetered on electric. It was that way for most of the game. The announced crowd of 17,163 (a near sellout) came early and stayed loud.

Jones had completed two passes before fans began showering him with “MVP!” chants.

“It definitely had that NFL environment,” Moore said. “I was just impressed.”

The fans also left an impression on the opposition.

“Shout out to DC’s fans,” said Dragons receiver Austin Proehl, who caught the first touchdown pass of the game Saturday. “I thought they did a great job of coming out making it electric, a fun place to play.”

The south end zone was rowdy and operated like the student section at a college game. But plenty of families were in the stands. Fans wore a variety of football garb but plenty of Defenders gear too, as a line to the team store went some 50 or 60 deep prior to the game.

The Defenders benefit from Audi Field’s capacity of roughly 21,000, and the seats’ proximity to the field enhances the environment. Other XFL teams that play in large NFL stadiums won’t enjoy that aspect, nor will it look as nice on TV.

But for Hamilton, the initial excitement is an indication of the possibility of the league achieving some sort of longevity.

“I think you had a good sense just based on the energy in the stadium that we all love football,” Hamilton said. ” … We want to give them a reason to come back out and support our football team.”

Shorter game? Not so fast XFL

When the league launched, McMahon was adamant that the XFL would provide a better entertainment experience by having shorter games. Well, the first one still managed to eclipse the three-hour mark and draggedat times.

Injury timeouts will always be necessary. It seems like an over-promise and under-deliver at this point, but perhaps things will become smoother as the season progresses.

After the game, Hamilton mentioned he bumped into a few boom mics on the sideline. ABC sideline reporter Dianna Russini hustled all over the field Saturday to interview players in real time. Before some plays, a cameraman joined the huddle.

Dragons offensive lineman Dillon Day failed to self-censor on air. This week, you can bet coaches will be listening to broadcasts to key in on their upcoming oppositions’ playcalls. But don’t expect anything to change in that regard, to the benefit of the viewer.