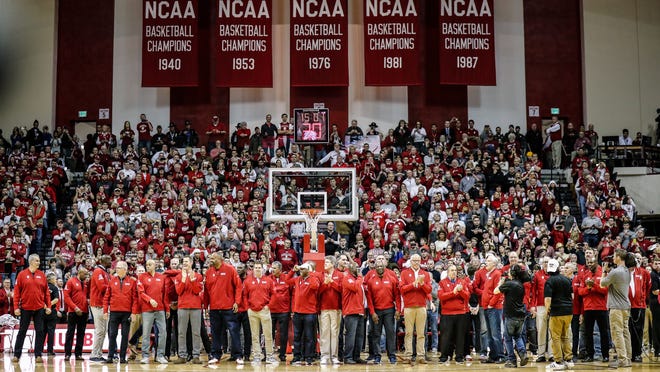 
BLOOMINGTON – The first sighting is on the videoboard. Bob Knight is in the hallway at Assembly Hall, walking toward the court, as the biggest Indiana basketball crowd in years starts to rumble. He’s surrounded by two of his former players, Quinn Buckner and Steve Green, and by his son, Pat. Those are details. Irrelevant, you might say.

Because that’s Bob Knight, and he’s walking this way.

Before this Indiana basketball revival is over, with men and women crying and Bob Knight shouting and with the student section paying homage, this will feel cathartic for everyone involved. Not even the final numbers on the scoreboard can ruin this day in Bloomington, even if those numbers say that Purdue – Purdue, of all teams – has beaten the Hoosiers 74-62 to strengthen one team’s 2020 NCAA tournament résumé, and weaken the other.

Another handful of details. Not irrelevant, not for a basketball school like Indiana, but secondary to the story of the day:

Bob Knight. Back in Assembly Hall, a place he hasn’t been since he was fired in September 2000, a place he vowed as recently as 2017 to never return. But that’s him in the hallway at halftime, and he’s walking this way. He’s walking slowly, looking every bit of 79 years, but he can hear the rumbling inside the arena. He can hear, as he emerges into this emotional cauldron, what they’re shouting:

After the game Randy Wittman and Mike Woodson are sitting at the podium where current Indiana coach Archie Miller had been moments earlier, trying to make sense of another desultory loss in a season that is getting away from the Hoosiers. Miller was talking about effort and rebounding and turnovers, and he was talking about Purdue’s Aaron Wheeler hitting some big early shots to get the Boilermakers rolling, and he was…

Ah, those are details. Not important. Not today.

Not even Randy Wittman and Mike Woodson seem completely convinced this has happened, that Bob Knight has just walked across the court at Assembly Hall. They’re talking about it, trying to put this day into perspective. Trying to make it feel real.

“It was one of the greatest and emotional days for me, personally,” Wittman says.

“I don’t know if we’ll see something like this again in college basketball,” Wittman says. “He came back. This is where he belongs.”

Woodson is nodding, and soon he will say this, echoing something Wittman had said earlier, two men trying to smooth over any remaining rough patches on Bob Knight’s return home.

We saw it, yes. And we heard it. Something else the crowd was shouting at halftime:

The freeze, and the thaw

The Indiana band is quiet, save for the drumbeat. If the band is going for drama, it’s working. The halftime show starts, and here comes the Hoosiers’ 1980 Big Ten championship team: Wittman. Woodson. Ted Kitchel.

Here comes Isiah Thomas, smiling that cute smile of his, and the crowd is making as much noise as it has made all day. Now the school is introducing “players who played for legendary coach Bob Knight,” starting with guys from the 1990s: Brian Evans, A.J. Guyton, Kirk Haston, Andrae Patterson.

Now there’s a taped video of Bob Knight, sitting in a chair. He’s not saying much, but he is saying this:

“I wasn’t the easiest guy in the world to play for. Does that surprise you?”

Ha. No, it does not. This is a guy who cracked whips and grabbed necks and did all sorts of things that earned him that zero-tolerance policy from then-IU president Myles Brand in March 2000, a policy Knight was never going to abide by. Six months later a student named Kent Harvey is greeting the caustic IU coach on campus with something stupid but innocuous — “Hey Knight, what’s up?” — and Knight is grabbing Harvey by the arm and lecturing him on manners. He is fired on Sept. 10, and students respond by marching ominously to Brand’s home, burning their school president in effigy.

That was more than 19 years ago, before Knight returned to coaching at Texas Tech, before he went to ESPN, before he disappeared from the public eye in 2015 save for an occasional appearance with his former Purdue combatant, Gene Keady. In 2017, Knight told Dan Patrick he had no interest in coming back to Indiana. As for the people responsible for his dismissal in 2000? “I hope they’re all dead,” Knight said.

Ice cold. But then, a thaw. Knight was spotted in April at an Indiana baseball game at Bart Kaufman Field. He spoke that month at Center Grove High School, his declining health on full display. In July he moved back to Bloomington. Three miles from Assembly Hall.

The longest three miles back.

“Lifts a pall over IU basketball”

It’s not as loud as you might think. Not in the beginning. It feels like the crowd isn’t sure what to make of Bob Knight, and judging from the look on his face, the feeling seems mutual. He’s offering a half-smile as the crowd chants with modest volume.

Quinn Buckner is leading Knight to center court, and Buckner is beaming. He looks so proud, so happy, and this is a day he’s talked about for years. Here it is, and as Buckner stands with his former coach at midcourt, he waves to the crowd for more noise. He gets it.

All those former players, back for this one reason, are surrounding Knight at center court, and now the tension is gone. The crowd erupts, and Knight is beaming as he hugs Isiah Thomas and Scott May. He’s posing for a group photo, flanked by Buckner and Woodson and surrounded by dozens of his former players, and here it comes. The love:

The show is over, but … hang on. What’s Knight doing now? He’s waving his arms, gesturing for silence. The crowd understands, and thousands of IU fans are offering in unison:

The arena is quiet. The floor is his. And Bob Knight, same coach that he ever was, is shouting two words:

The crowd is in love. Some are bawling. Seven rows from the court, Indiana graduate Brian Vogel had tears on his face.

“There was crying everywhere,” says Vogel, 34, a Connecticut native now working in San Francisco. “It lifts a pall over Indiana basketball. This heals wounds a lot of people didn’t want to admit were there.”

Fans are roaring as Knight ambles toward the television crew at midcourt. Before he gets there he’s shouting to the crowd. His words don’t carry to all reaches of Assembly Hall, but the fans nearby can hear him, because they started chanting:

Knight pumps both his fists as he reaches ESPN’s Dick Vitale, and now this afternoon threatens to go completely off the rails. Knight is hugging Vitale and gesturing for his headset. Knight wants to talk to the crowd, to the ESPN audience, to whomever he thinks is at the other end of that headset, but Vitale won’t give it up. Knight gives him a mock shove as the crowd roars some more.

It’s almost over now. Buckner is leading Knight back to the tunnel, to the hallway, but Knight isn’t ready to let it go. He’s waited 20 years for this moment, and near the tunnel he stops to look into the crowd, into all those students, most of whom have never seen him with their own two eyes. For almost 20 years Knight has been a legend, a specter, a shadow. Now he is real, flesh and bone, and he is making one final gesture of supplication to the student section.

The crowd roars, and he’s gone. Soon the game will start again, and it will get out of hand for the home team, but that doesn’t matter. Not today. The Hoosiers have another game at Assembly Hall on Thursday against Iowa. They have another shot at Purdue on Feb. 27.

Those are details. This was Bob Knight, back in Assembly Hall for the first time since 2000. Nothing else matters.

Find IndyStar columnist Gregg Doyel on Twitter at @GreggDoyelStar or at www.facebook.com/gregg.doyel.