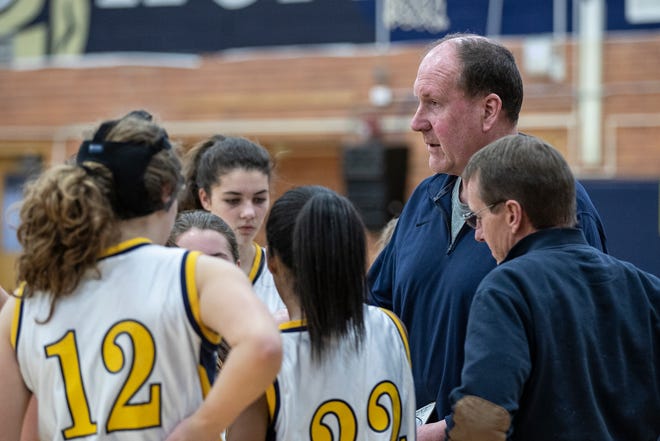 
The second half of thegirls varsity basketball game between Grosse Pointe (Michigan) North and Grosse Pointe South was about to begin when freshman girls coach Bob Zaranek returned from the concession stand, carrying popcorn for South scorekeeper Leo Lamberti.

He placed the popcorn down and noticed the clock — 58 seconds left in the halftime break.

“I looked up and saw the team coming out,” Zaranek said. “I looked back down and my eyes got blurry. I thought: ‘Wow, that’s kind of weird.’

“That’s the last thing I remember.”

Zaranek collapsed, hitting the court face-first. He was clinically dead.

A few weeks have passed since he was brought back to life — twice — and he is again coaching the South freshman girls team while trying to make sense of what happened that night.

He still has no answers to any of his questions. All Zaranek, an attorney, knows for sure is that he is alive only because of an amazing group of people who did not panic in the most traumatic moment.

“If they didn’t have an AED there or the people or the training,” he said, shaking his head, “I wouldn’t be here.”

The usual clock operator had a conflict the evening of Jan. 10, and Zaranek was asked to fill in.

Standing behind the scorer’s table was Collin Karcher, a certified athletic trainer assigned to South. Up in the stands was Kathy Richards, the mother of South girls varsity coach Kevin Richards.

When Zaranek collapsed, Karcher got on the ground next to him. Richards sprinted across the gym.

“When you see someone unconscious,” Karcher said, “you have to assume the worst.”

Kathy Richards heard a commotion and looked down, but did not have a clear view of Zaranek.

“I had noticed Kevin had walked over to the scoring table and then I saw him run,” he said. “All that I could see was Bob’s feet outside the table. I thought either he fell or had a seizure. By the way his feet were moving, I knew that’s not a good sign.”

A recently retired nurse of 43 years who had managed the cardiac catheterization lab at McLaren Port Huron Hospital, she ran down the bleachers and onto the court.

“We started looking for a sign of life, that’s a pulse,” Karcher said. “Once you don’t have a pulse, the emergency action thing goes into place.”

South girls junior varsity assistant coach Joe Srebernak, who also is a Grosse Pointe police officer, helped Karcher roll the 6-foot-8 Zaranek onto his back. There was blood on the court and his face, a result of the fall.

The blood was the least of Karcher’s concerns at that moment.

The most crucial aspect was that the South gym had an AED, a medical device that delivers an electrical shock to restart the heart. Neither the state nor the MHSAA require schools to have AEDs, but MHSAA varsity coaches must undergo CPR training.

As he ran to get the AED, Kevin Richards also thought of someone else.

Medical professionals who had been in the crowd offered to help. One was Austin Price, a cardiac nurse.

“’Austin, I need you to do compressions,’” Karcher said he told Price. “He was fantastic.”

Price relieved Kathy Richards as Karcher and Srebernak prepared to use the AED.

Zaranek was wearing a dress shirt; Karcher ripped it open.

“I didn’t take the time to undo the buttons,” he said. “I apologized for ruining his shirt.”

An instant later Richards returned with the AED.

“He set it right in front of us, open,” Karcher said. “He knew the drill.”

Once the AED is operating, it instructs what needs to be done.

“Between Austin and Kevin’s mom, we probably got through one to two rounds of compressions,” Karcher said. “At that point, the AED said ‘shock advised.’ ”

By the time he applied the first pad, Srebernak had the second one off the machine and ready to go.

“It’s not like a movie where they kind of jump up,” Karcher said. “Austin gave him compressions again and maybe five to 10 compressions in, Bob starts to take breaths.

“He then slowly — I don’t know if there’s a better way to put it — comes back to life. He starts breathing again — he’s gasping — he has a good pulse.”

Zaranek had no idea if he was out for a minute or an hour. It took some time for him to regain his bearings and figure out he was in South’s gym.

“The next thing I know is I’m there looking up and Collin is there,” he said. “I see Joe Srebernak, who’s standing there and I see Kevin standing there. I can hear Collin talking to me. He said they were going to take me to the hospital. I said, ‘I just want to go home.’ I think I said that 100 times.”

Karcher remembers Zaranek also saying that he wanted to get some rest because they had practice at 7 a.m.

He was rushed to Beaumont Hospital, Grosse Pointe. His wife, Betty, and his daughter, Amy, arrived soon after.

Then came the second attack. After returning to his room following his CT scan, Amy noticed her father’s monitor reacting as he went into cardiac arrest again.

“Amy said she got up out of her chair to yell for help and a second later they were there and a guy jumps on the bed doing CPR,” Zaranek said. “Those nurses at Beaumont take care of you like you were their long-lost grandfather. They’re spectacular.”

The same could be said of the people at South who saved his life the first time.

“I’ll tell you, he was so impressive,” Richards said of Karcher. “His calmness, his poise — he showed leadership, directing and he did everything that you train for. He was kind of the point man.”

This was the first time Karcher found himself in this situation, but you never would have known it by the way he reacted.

“It’s kind of amazing how this all happened,” he said. “I can’t say we were all ready for this to happen, but prepared mentally, it was all there. Everybody performed.”

That, too, was crucial. Karcher didn’t have to waste time prepping the volunteers on what needed to be done.

“There were probably a dozen people around us grabbing stuff that we needed, just taking care of business,” he said. “They all knew what we needed to do, so it was awesome.”

One of the biggest lessons learned from the incident was the need for the AED. Without it, Zaranek might not have survived.

“If you don’t have that electric shock from the AED, compressions are just to deliver oxygen to the brain,” Karcher said. “You’re doing the heart’s job, but that doesn’t restart the system. The heart runs on electrical impulse and whether you have a dysfunctional rhythm or you have no rhythm at all, that electrical shock can restart it or stabilize it.”

Zaranek had a stent inserted in one artery, which was completely blocked. He is attending cardiac rehab and has returned to work and to coaching.

He understands how vital the AED was to his survival and hopes to find a way to help raise awareness that every school in the state needs to have one in its gym.

Most of all, Zaranek is grateful to Karcher.

“What do you tell the guy?” Zaranek said rhetorically. “I give him a huge hug and I tell him ‘thank you.’ I don’t know what else to tell him or any of the other people.

“They were all there for me.”