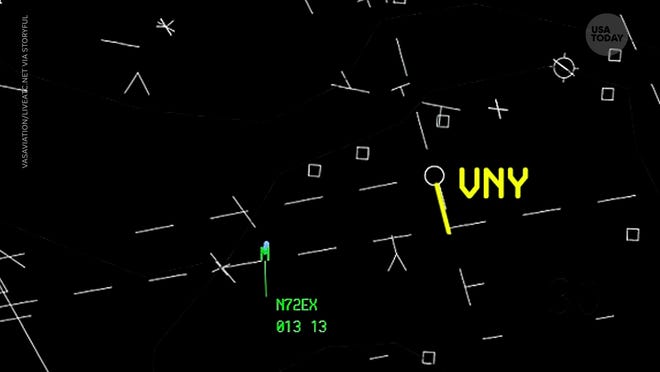 
LOS ANGELES — Federal investigators say wreckage from the helicopter that crashed last month and killed Kobe Bryant, his daughter and seven others did not show any evidence of engine failure, according to a preliminary report by the National Transportation Safety Board.

The initial findings will be followed by a final investigative report in about a year.

The helicopter took off Sunday, Jan. 26, in Orange County to fly Bryant, his 13-year-old daughter and their friends about 90 miles to a youth basketball tournament in Thousand Oaks, California. They were flying aboard a Sikorsky S-76B, a big helicopter outfitted for executive transport, and a model with a generally good safety record.

It was piloted by Ara Zobayan of Huntington Beach, California, who was qualified to fly both visually and on instruments, Federal Aviation Administration records show. He received his commercial pilot’s license in 2007.

Crash investigation :How this helicopter safety device might have saved Kobe Bryant and eight others

The helicopter was being flown by sight, not instruments, following Southern California’s freeways as it worked it way northwest. But as it got closer to its destination, the helicopter ventured from the flatlands into more rugged terrain and encountered a thick layer of fog.

Though it was outfitted with many luxury appointments, the NTSB said it lacked a terrain awareness and warning system, or TAWS, which tells pilots if they are headed toward a hill or mountain obscured by clouds. Though the NTSB has recommended TAWS be required equipment aboard large passenger-carrying elements, it is still considered optional.

The helicopter carrying the retired NBA superstar and his party was flown up a canyon in Calabasas, California. Zobayan radioed air traffic controllers, having already received permission to proceed with less than normal visibility, saying he was going to try to rise above the clouds. Investigators said he climbed to 2,300 feet above sea level, made a left turn and then crashed at high speed into the mountainside at 1,085 feet. The craft hit with such force that debris was scattered over a 600-foot area.

Those nearby who heard the crash said they couldn’t see wreckage through the heavy layers of clouds at the top of the hill. It was only when they saw smoke rising that they knew a helicopter had crashed.

There were no survivors. A thin trail of smoke rose from the wreckage for hours after the crash.

Though Zabayan missed hitting the top of the hill by about 30 feet, investigators said there were even higher slopes in the area with which he would have had to contend.

A full investigation is expected to determine whether the cause of the accident was pilot error or mechanical failure. But it won’t be easy. Unlike commercial aircraft, the helicopter didn’t have cockpit voice or flight data recorders aboard. The NTSB hauled away wreckage in large white bags to analyze it for clues.