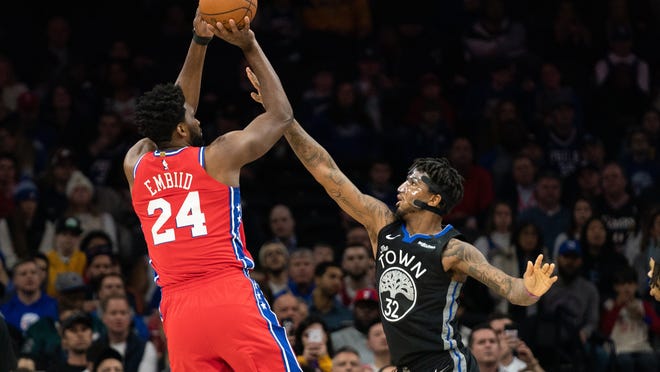 
Pat Riley has nothing left to prove.

It’s a resume that has him enshrined in the Naismith Basketball Hall of Fame.

Loud and clear now: Pat Riley still has something to prove.

He wants to win another championship, in another decade and era of the NBA, post-LeBron James-Dwyane Wade-Chris Bosh Heat.

Riley, and his trusted, smart and creative general manager Andy Elisburg see an accelerated window to compete for a title so they acquired Andre Iguodala from Memphis in a deal that adds a proven veteran with championship experience and a mindset that fits Miami’s culture.

The Heat are better than expected sooner than expected because of the emergence of Bam Adebayo and Duncan Robinson and rookies Tyler Herro and Kendrick Nunn, alongside All-Star Jimmy Butler.

It is a remarkable deal for the Heat. They traded three players (Justise Winslow, Dion Waiters and James Johnson) who were no longer part of their long-term plans, lowered salary, created salary cap space, didn’t give up any draft picks and gained Iguodala.

Even if the Heat don’t reach the Finals this season, they are positioned to compete in the Eastern Conference for the next few seasons.

Credit Elisburg for the execution and Riley for the vision.

“He’s one of the great visionaries of this Association, and it never ceases to amaze me how he continues to reinvent and think differently,” Heat coach Erik Spoelstra told USA TODAY Sports. “That’s what visionaries do. They think way bigger and much differently than we do.”

Even at 74, the desire to win remains as strong as ever for Riley. At home games, whether sitting directly across from the Heat bench a few rows up from the courtside seats or sitting in media style seating behind one of the baskets near a tunnel that leads to one of his offices, Riley wears winning and losing on his face.

If one thought Butler’s passion to win would disrupt the team, a person with the Heat organization laughed at that. No one is bothered more by losing than Riley, the person told USA TODAY Sports. The person requested anonymity because he was not authorized to speak publicly about Riley.

NBA TRADE TRACKER: Analysis on all the moves

Spoelstra has been around Riley since he joined the Heat as a video coordinator 25 years ago. Riley made Spoelstra the head coach in 2008, and Spoelstra, who guided the Heat to titles in 2012 and 2013, is now one of the longest tenured coaches in the league – behind San Antonio’s Gregg Popovich and tied with Dallas’ Rick Carlisle.

“He’s one of the ultimate competitors in this league,” Spoelstra said. “If you put together a Mt. Rushmore of NBA winners and influencers of the last 40 years, he’s on that rock. Just look at his track record. He has reinvented himself more times than arguably anybody else in this league. It always is to put whatever team he’s with in the best chance to compete for a title, and he’s done that over and over.

“He’s younger now and even more creative than he was his last couple years coaching because he’s out of the grind of coaching.”

There is the glamorous side to Riley that everyone knows and sees. The fine food and wine, the designer suits, the bright lights of Hollywood, New York and Miami. He likes having stars on his team: Magic Johnson, Kareem Abdul-Jabbar, Patrick Ewing, Dwyane Wade, Shaquille O’Neal, LeBron James, Chris Bosh.

But there is the gritty Riley, who grew up in industrial Schenectady, New York. That Riley digs into defense and prefers unheralded blue-collar workers – like Kurt Rambis, John Starks, Anthony Mason and Udonis Haslem, who has been with the Heat for 17 seasons.

That Butler is a combination of glamour and grit and now plays for the Heat is no coincidence. As Spoelstra told USA TODAY Sports earlier this season, Butler is the kind of player the Heat should have had on their roster long ago.

The Heat have front-office continuity that many teams don’t have. There is a trust that allows the Heat to operate even if there are disagreements. Riley still loves the machinations of running a team and all that goes with it, specifically the winning, competition and teamwork. It’s what he knows.

Following the dissolution of the Big 3, Riley tried to put the group back together quickly, and it didn’t work. Miami gave out some bad contracts and brought in some players who were not great fits. And there was muttering that maybe the game had passed by Riley.

Riley and his staff now have a roster that is closer to winning a title than anyone would have predicted six months ago.

Riley wants another championship, has always wanted another title and will always want another one.