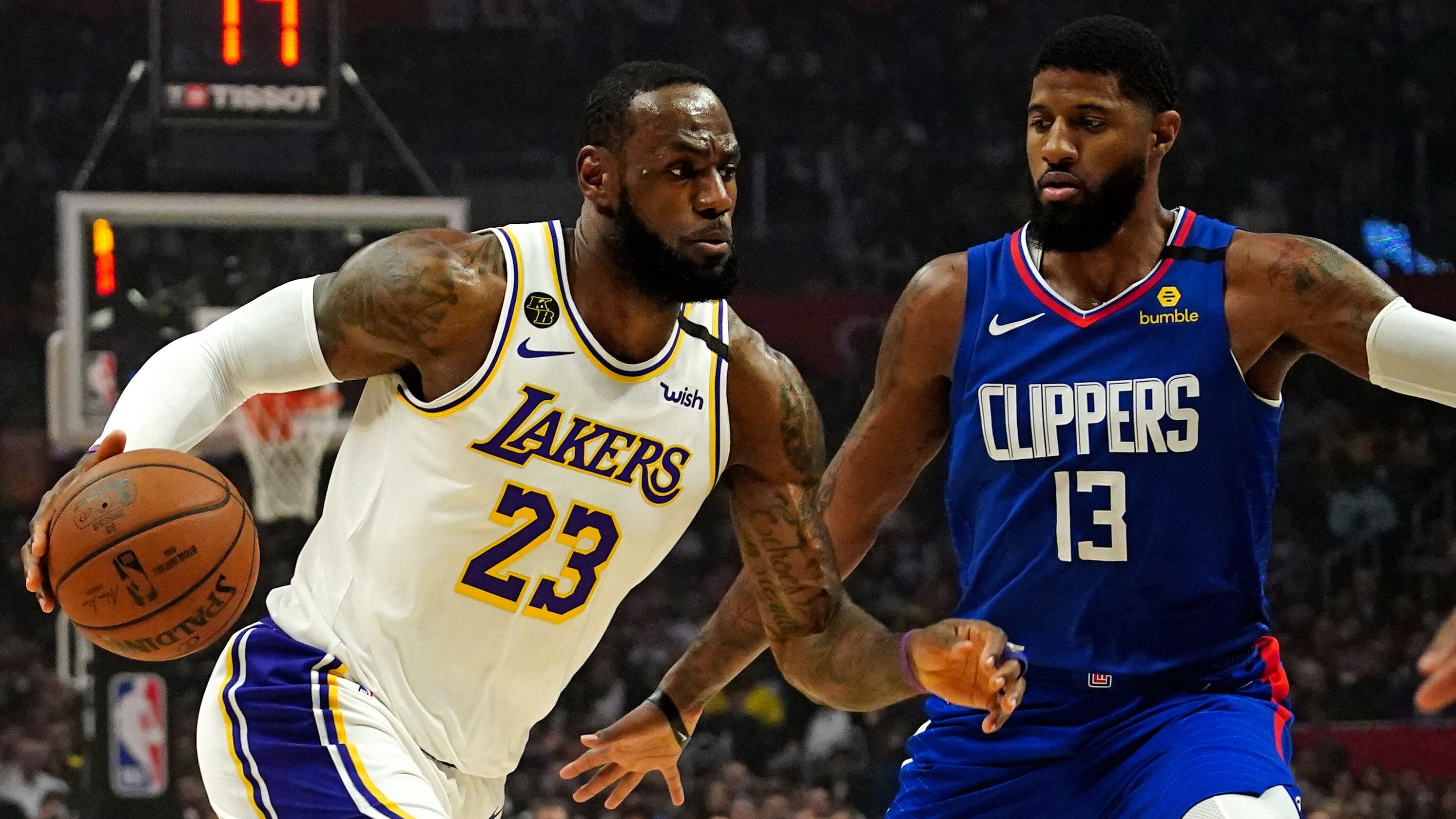 Are Lakers or Clippers better prepared to resume season?

SportsPulse: The NBA will finish the regular season with 88 games in 15 days during its Disney bubble. USA TODAY Sports’ Mackenzie Salmon identifies the five you can’t miss.

Before the coronavirus pandemic halted the NBA season nearly 3½ months ago, the league’s marquee franchise became a championship favorite by navigating a season not even an imaginative Hollywood producer could write.

The Los Angeles Lakers leaned on LeBron James and Anthony Davis. They thrived off their teamwork and supporting cast. They bonded through the joy of winning and the sorrow of losing franchise icon Kobe Bryant. After winning 12 of their last 14 games and cementing the Western Conference’s top record before the NBA halted operations, can the Lakers (49-14) maintain that resiliency when the season resumes at a quarantined site in Orlando on July 30?

“I loved where we were at, so I definitely hope there will be some continuity and carryover,” coach Frank Vogel said Wednesday on a conference call. “How quickly that takes place is a great question mark.”

The other L.A. team has wrestled with that same question. Before the NBA season stopped, the Clippers had finally fielded a fully healthy Kawhi Leonard and Paul George. The Clippers found the right roster combinations to complement their duo. They finally seemed removed from regular-season complacency by winning six of their last seven games. The Clippers (44-20) trail the Lakers by 5½ games in the West after losing an intra-city matchup three days before the season stopped. So can the Clippers seriously challenge the Lakers beginning when they meet on re-opening night?

CONCERNS: What would it take to halt the resumed season?

The Lakers have already had plenty thrown at them in the last week that could influence their ability to tie the Boston Celtics for the NBA’s most championships (17).

Lakers guard Avery Bradley opted not to play because of concerns about his 6-year-old son’s history of respiratory illness. Although Vogel expressed optimism that center Dwight Howard will participate, he has not indicated if he will play, either. Howard has remained conflicted both out of concern about centering his focus on racial equality efforts and caring for one of his sons that lost his mother in late March because of a seizure. And citing privacy concerns, Vogel declined to say if the full team participated on the first day of mandatory individual workouts.

Can the Lakers still maintain their next-man-up mentality? Vogel said the Lakers have “no intention of replacing Dwight’s roster spot,” leaving the team flexibility on his potential return. But the Lakers already signed J.R. Smith on Wednesday to fill Bradley’s vacancy. Smith already has teamed with James in Cleveland through four NBA Finals appearances and one championship, but he cannot complete any work until he receives medical clearance and has not played since the Cavaliers waived him last summer. Kentavious Caldwell-Pope, Alex Caruso and Danny Green have proven capable, but they also have had rough stretches. The Lakers acquired Dion Waiters and Markieff Morris to bolster their depth before the trade deadline, but they have practiced little together.

“It is going to take time. The things you’re talking about in terms of continuity in the system, they’re habits,” Vogel said. “It takes a lot of hard work on a daily basis to ingrain those habits. So just because we were at a really high level when the hiatus began, it doesn’t mean we’ll be right there. Just because our chemistry was great at the end of the hiatus, doesn’t mean it’s going to be there to start.”

Meanwhile, the Clippers do not have as many questions about their roster. Rivers has received indications that Lou Williams plans to play after expressing the possibility he would sit to focus on racial justice initiatives. Leonard no longer needs load management after healing his knees for the past 3½ months. George has said his shoulders feel fully healed after missing the first 11 games because of offseason surgery. The Clippers have depth in their front court (Montrezl Harrell, Ivica Zubac, Joakim Noah) and backcourt (Landry Shamet, Patrick Beverley, Marcus Morris).

As soon as the pandemic struck, Rivers stressed to his team the need to “win the wait.” The Clippers’ training staff gave players various equipment to maximize their quarantined workouts. Players talked strategy via group text. Rivers and his coaching staff watched footage of both themselves and possible first-round opponents.

“There will be a carryover,” Rivers said. “I don’t think we’ve ever had a chance after 60 games to take a three-month break, evaluate what we were doing well, what we were doing poorly, what we should have done more or less and then put it back together. So I think that’s to every team’s advantage. So yeah, I do think those games matter, though, because it does give you a window of who you were.”

Still, the Lakers have taken similar approaches during the pandemic. James, 35, argued a disrupted season could halt the momentum he created more than benefit him with extra rest. Yet, he stayed disciplined by shooting on a private hoop, training in a private gym and staying in touch with teammates. Rob Pelinka, the Lakers’ vice president of basketball operations and general manager, lauded all of his players for becoming “really creative” with their training, which has included Zoom workouts inside and running various trails outside. Vogel and his staff already studied possible first-round opponents.

“I think that Orlando itself is going to be as much of a mental test as it is a physical test because of the extraordinary circumstances there,” Pelinka said Tuesday in a conference call. “I think a team like ours that has such a strong togetherness component will have an advantage at that part. This team of guys love being together and they love playing together.”

Both the Lakers and Clippers anticipate more hurdles awaiting them.

They remain aware of the possibility that any player could contract COVID-19. They are mindful of looming injuries and expected rustiness. That explains why both teams have appeared serious with following the safety protocols. That explains why both teams plan to use the eight remaining regular-season games to sharpen conditioning and chemistry without causing fatigue or injury.

Clearly, how the Lakers and Clippers end the season goes beyond relying on their top-heavy talent. It depends on how their stars, role players and coaches navigate these hurdles. Therefore, Rivers agreed with NBA Commissioner Adam Silver when he recently told him, “the team that wins this will deserve a gold star, not an asterisk.”

“Our team’s been through a lot this year,” Vogel said. “We’ve endured and we’ve come out strong each time we’ve faced adversity. If we’re able — I don’t know about other teams — but if we were able to come through all of this and achieve the ultimate prize, I do think it deserves a ‘harder than ordinary’ asterisk if you’re going to put an asterisk on it.”

First things first. The NBA’s favored championship contenders will have to show how well they can lean on their talent, experience and preparation to avoid all the landmines so they can hold a trophy.