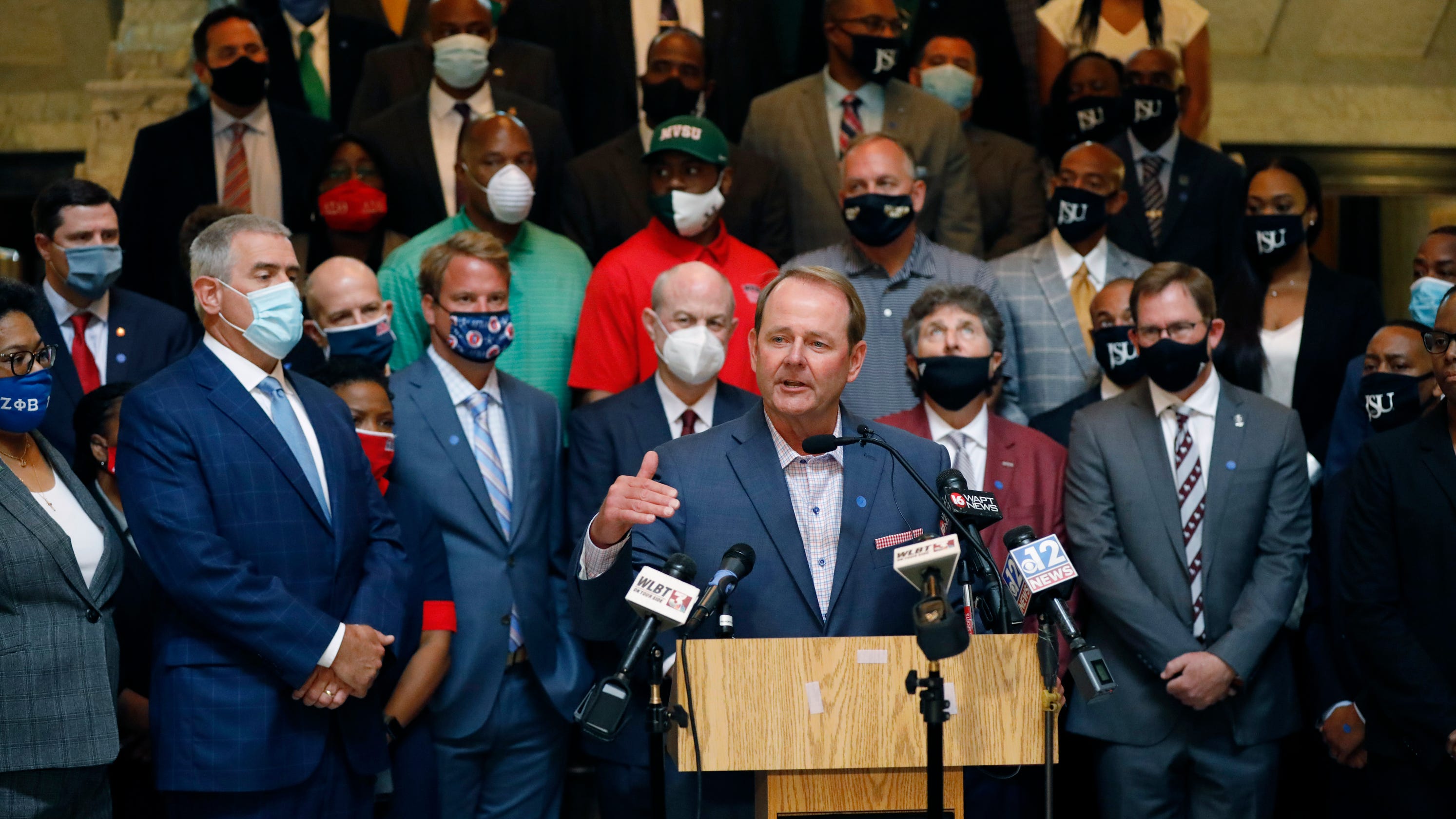 It’s been a hard three and a half months without sports. But in the absence of games and practices, Mississippi’s athletes and coaches did more to help create change than ever before.

Mississippi Gov. Tate Reeves signed a bill Tuesday evening that mandates the removal of the state flag and bans future use of the Confederate emblem. Years of grassroots efforts and statewide activism went into ensuring Mississippi was no longer the only state to include the emblem of the Confederate battle flag on its flag. The politicians, lobbyists and everyday citizens who fought to make this change happen deserve plenty of credit for persisting and persevering.

But make no mistake: Sports turned this from a debate to a reality.

I briefly chatted with Ole Miss linebacker MoMo Sanogo on Saturday afternoon. It was around the same time the state Senate was voting to allow Sunday’s vote (Both chambers of Mississippi’s legislature voted to take down the state flag). Sanogo couldn’t contain a wry grin thinking about the implications of the impending vote.

People have fought to get the flag taken down for years, he correctly pointed out. But after all that, he said, it really only took two legislative days for the change to happen.

Of course, that’s being reductive. Plenty of effort went into this bill passing. It’s important to acknowledge the role sports played in this, though.

The NCAA and Southeastern Conference put pressure on Mississippi, the NCAA outright prohibiting postseason events in this state until the flag was changed or taken down. Mississippi’s public universities followed with condemnation after condemnation of the flag and its symbolism.

Opinion: It’s time for Ole Miss to finally do away with ‘Rebels’ nickname

More: Of more than 1,000 head coaches in NCAA sports at Power Five programs, less than 10 percent are Black

Mississippi State running back Kylin Hill increased the pressure, tweeting last week that he’s no longer willing to represent any Mississippi institutions on the field if the flag isn’t taken down. A number of his teammates supported him, as did his head coach Mike Leach.

Either change the flag or I won’t be representing this State anymore 💯 & I meant that .. I’m tired https://t.co/IzizpWLoIg

Forty-six coaches from eight different Mississippi universities descended on the Capitol. Ole Miss men’s basketball coach Kermit Davis and Mississippi State women’s basketball coach Nikki McCray-Penson both gave passionate speeches. Davis spoke from the perspective of a born-and-raised Mississippian ready to see his home-state change. McCray-Penson spoke from the perspective of a newcomer who understands the lifelong struggles of being a Black person in the South who has to deal with the ever-present specter of seeing images she believes represent hatred.

Athletes, coaches and conferences obviously weren’t the only institutions to put pressure on Mississippi lawmakers to make this change. Representatives from every walk of life chimed in too, ranging from religious leaders and entertainment celebrities to major businesses and even politicians themselves.

But it’s important to note just how powerful a united message from the athletic community can be. Mississippi didn’t just realize this week that a large chunk of its population supported flag reform. This has been known for years.

Need further proof? Omeria Scott, a Mississippi congresswoman representing District 80 in the House of Representatives, suggested naming the flag change legislation after Hill. Scott said “the voice of this young man was a tremendous voice” when describing Hill.

That motion was tabled, but it speaks to just how influential someone like Hill can be when trying to create change. In some respects, the actions of one college football player accelerated the efforts and voices of thousands of others who had been fighting the same battle unsuccessfully.

Now more than ever, we’re starting to see college athletes use their voices to create change. These student-athletes aren’t gladiators. They aren’t nameless, faceless warriors who run around in armor on Saturday afternoons to entertain the masses. They aren’t automatons programmed to throw and catch prolate spheroids who get switched off when the final buzzer rings.

These athletes are people with opinions and goals.

Take Ole Miss defensive end Ryder Anderson. I caught up with Anderson after the LOUnited rally on Saturday, a march for unity and progress he planned with Sanogo. I asked Anderson about this very topic, and he sees a bright future for athletes like himself and Hill who choose to use their platforms for more than trying to get bowl eligible.

“We can step up,” Anderson said. “We can use our voice, use our platform. Together we are really strong. We can really make stuff happen if we just come together.”

If we learned anything from this last week in Mississippi, it’s that Anderson no longer has to speak hypothetically. Change happened.

Give athletes the credit they deserve.