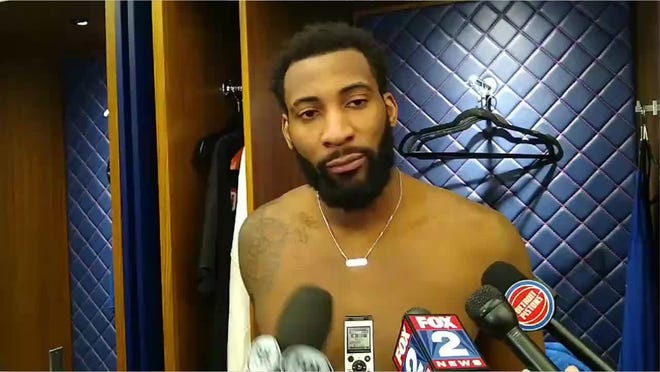 He was moved Thursday at the NBA trade deadline.

The Detroit Pistons are sending Drummond to the Cleveland Cavaliers, a person with knowledge of the deal told the Detroit Free Press. The person was granted anonymity because they could not speak publicly about the deal, which has not been finalized.

Cleveland is sending Brandon Knight, John Henson and a 2023 second-round pick to Detroit.

ESPN was first to report the trade.

After 7½ seasons of historic rebounding, Drummond leaves the franchise with three rebounding titles and two All-Star appearances. But he also leaves after a lot of losing; the Pistons reached the playoffs twice with Drummond, and an NBA record 14-game postseason losing streak is ongoing.

NBA TRADE TRACKER:Analysis on all the deals

Drummond leaves the franchise as the second-leading rebounder in Pistons history behind Bill Laimbeer. He’s averaging 17.8 points and a league-leading 15.8 rebounds in 49 games this season.

There’s no disputing he was the best Piston the past decade, but the organization is looking to the future and embarking on a youth movement.

Drummond, 26, was once a franchise cornerstone.

The 6-foot-11 center fell to the Pistons at No. 9 in the 2012 NBA draft. Michael Kidd-Gilchrist, Dion Waiters and Thomas Robinson were among the players picked before Drummond, who was 18 on draft day.

After a back injury forced Drummond to miss a few weeks as a rookie, he was durable. He has played at least 78 games in six straight seasons.

Teams prefer 3-point shooting at all five positions and Drummond is a traditional center, who lacks an offensive game outside the paint. And though he has improved defensively and is one of the league’s best playmakers generating steals and blocks, he’s not an elite rim protector such as Rudy Gobert.

Some fans grew weary of Drummond’s inconsistent effort. It reached the nadir last season in Game 3 of the Milwaukee Bucks’ four-game sweep of the Pistons in the first round of the playoffs, when a poor-performing Drummond was booed at Little Caesars Arena by fans.

Drummond still has value. He’s a great rebounder and he has quick feet, a needed talent to defend pick-and-rolls.

But it’s not worth the maximum five-year, $127 million contract he signed in the summer of 2016.

Drummond requested a contract extension last off-season. The Pistons countered, but it was less than the max.

Drummond has a $28.7 million player option for next season that he said he plans to decline, meaning he will hit the open market this summer.

He would try to sign a multi-year deal without much competition in what’s considered a down year for teams looking to find big-time free agents.