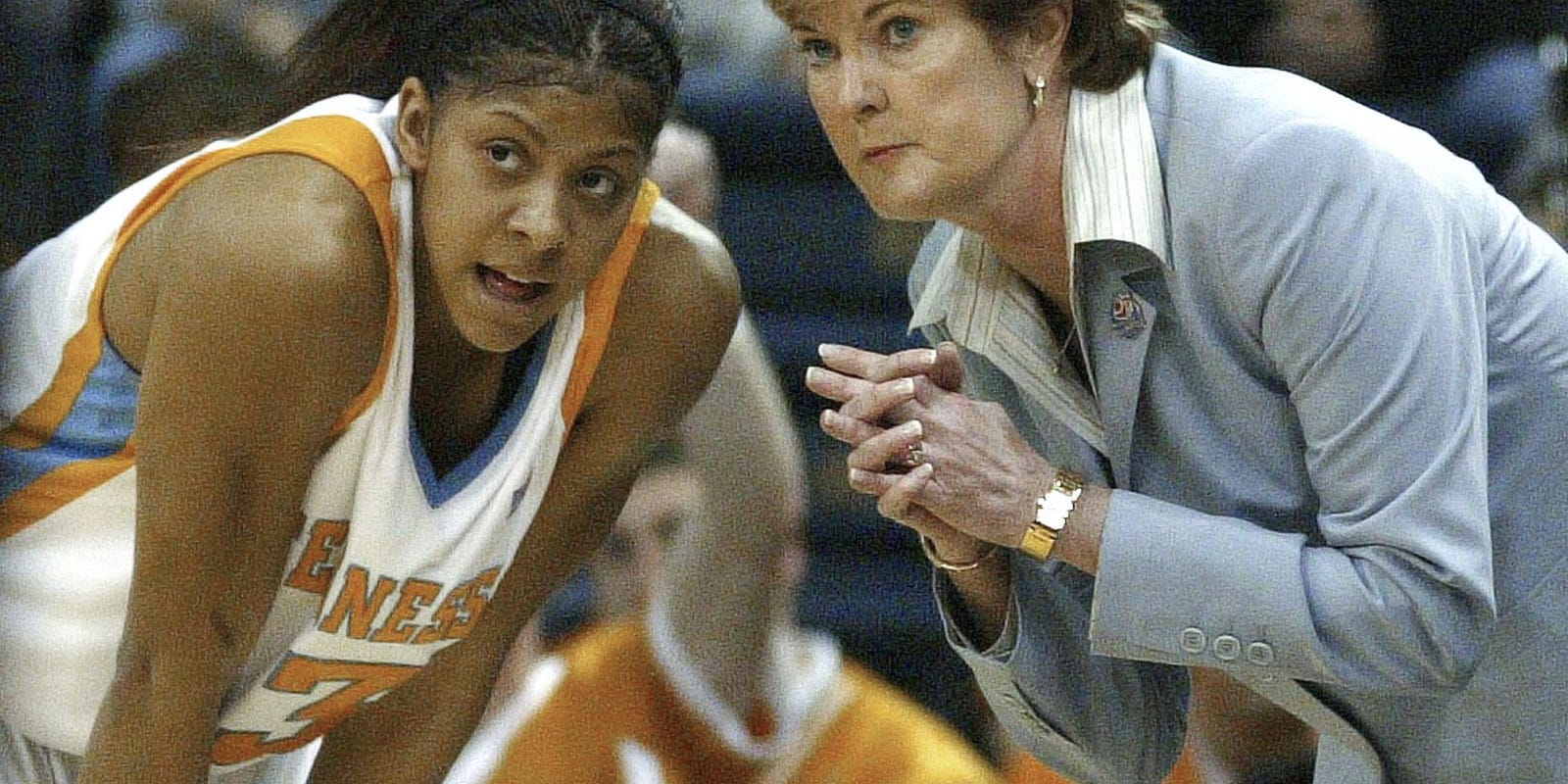 A look back through archive photos and videos of legendary coach Pat Summitt, who spent 38 seasons as the head coach of the University of Tennessee Lady Vols, with a 1,098-208 record.

The carpool from Georgia to Knoxville for Pat Summitt’s funeral was filled with reflection and reminiscing. Seven former Lady Vols cried and laughed as they shared memories during the drive of their former coach.

Eventually, the conversation turned to race. Six members of the group were among the first Black players to ever play for Summitt at Tennessee.

They talked about how much Summitt helped them grow as players, but more importantly as people. They never felt marginalized, and always felt valued.

“I had no idea I was one of the first until Pat’s funeral 30 years later. I never even thought about it before then,” said Lisa Webb Kimbrough, who played for Summitt from 1983-88. “It means that she got it right. She obviously studied and made sure she knew each player and who they were and coached them accordingly on and off the court. It wasn’t Black or white with Pat.”

As the women’s basketball world marks the four-year anniversary of Summitt’s death from Alzheimer’s disease on Sunday, Summitt’s former players believe her leadership would be valued now more than ever given the current climate of the country.

With protests roiling the nation and the coronavirus upending normal life, sports has been at the forefront of pushing for change. Coaches have been looked to for their reactions, and former Lady Vols have no doubt Summitt would have been an outspoken voice.

Always a fierce advocate for gender equality, they say Summitt would have brought the same energy in the ongoing fight for racial equality. They are confident she would have empowered her players to speak out and take action.

“She always used her platform to promote change and better people’s lives and promote equality and she would be doing that now,” said four-time All-American Candace Parker, who played for the Lady Vols from 2004-08. “In wanting equality, it was not just equality for gender. It is equality across the board, which includes race, which includes religion. It includes a number of things, and I think I can say she wouldn’t stray far from who she was because that is what she embodied even then.”

Nikki McCray-Penson was recently named the basketball coach at Mississippi State. The two-time UT All-American has been using Summitt as a guide for how to navigate the uncertain nature of her first few months on the job.

“Always stand up for what you believe in and treat people the way you want to be treated. All those things that she taught us I am teaching our players and passing along that information,” said McCray-Penson, who played at UT from 1991-95. “I want them to have a voice and be able to represent themselves and handle adversity with class.”

McCray-Penson can clearly envision Summitt’s reaction to the outrage and cries for social justice stemming from the killings of several unarmed Black citizens.

“If you knew Pat, she had a heart of compassion and she always stood for what is right. Those things were very important to her and it is what made up her DNA,” McCray-Penson said. “She would be standing alongside what is right and speaking up on those things because her voice was powerful.”

Sheila Collins was recruited to Tennessee by Summitt out of Athens, Georgia, in 1981. She arrived five years after Trish Roberts became the first Black player to play for Summitt at UT in 1976.

Her mother was initially hesitant to let Collins leave the state, but trusted Summitt would take care of her. During high school, Collins’ team bus was rocked in Forsyth County as a means of racial intimidation, but Collins says she never experienced any tension at Tennessee,

“Pat protected us with her life in every aspect,” Collins said. “There is no question in my mind she would have probably gone overboard to stand up against anything not being fair. She wouldn’t be afraid to step out there and say this is wrong because she had a personal relationship with us and molded us and shaped us into women.”

Aside from wanting to join a championship program, McCray-Penson came to Tennessee because she saw how other Black females excelled under Summitt in all facets of life.

“For me, it was all about playing for someone who could help me reach my dreams, and I still believe to this day Pat was someone that sold me on who she was as a person,” McCray-Penson said. “She was very relatable to me, and seeing how women of color at the time were very successful in her program spoke volumes to me. She never saw race. She just saw the good in people and treated everybody the same.”

The Lady Vols featured an all-Black starting lineup during Parker’s final season at UT in 2007-08. Parker recalls Summitt bringing the team together to discuss the potential ramifications, which Summitt did for many other societal and gender issues.

In this March 19, 2006 photo, Tennessee coach Pat Summitt talks with Candace Parker during their 102-54 win over Army in the first-round of the NCAA tournament in Norfolk, Va. Parker scored 26 points.

“Those were team meetings where we had those hard conversations. We had them as a team, but also individually,” said Parker, in her 13th season with the WNBA’s Los Angeles Sparks. “That is one thing about Coach, she didn’t really shy away from the uncomfortable and I think now the world is dealing with that. We have shied away from the uncomfortable for a long time, whether we knew it or not. That wasn’t my experience with Coach.”

A sisterhood of epic proportions

Summitt operated her team as a meritocracy on the court. Players earned their time through hard work, dedication and trust. Her players say the same philosophy held true beyond the hardwood.

Two-week span between Pat Summitt’s birthday and her death time for thinking and remembering for Tennessee Lady Vols coach.

Summitt wanted them all to reach their potential and never settle. All 161 Lady Vols who played for Summitt in her 38 seasons graduated from college.

“She encouraged me to get my Master’s degree because she knew it would help me jump-start my career,” said Webb Kimbrough, who has worked at the Centers for Disease Control and Prevention for the last 30 years. “She did those extra things she didn’t have to do. I am truly grateful now and will be forever grateful for everything she did for me outside of me being a basketball player.”

From Parker’s tattoo of “Left Foot. Right Foot. Breathe.” to daily motivational sayings printed on pieces of paper around the house, Summitt’s players keep her spirit close to their hearts to help them navigate tough times.

They’ve become advocates for each other in her absence, and try to do everything possible to live up to Summitt’s ideals.

“To this day, we are very much one and that speaks volumes to our sisterhood,” McCray-Penson said. “Through the different ethnicities, ages and experiences, there is a level of commitment and understanding that has been passed down through the generations because we played for her. It’s been really wonderful to carry on that tradition and see the legacy she left for us.”