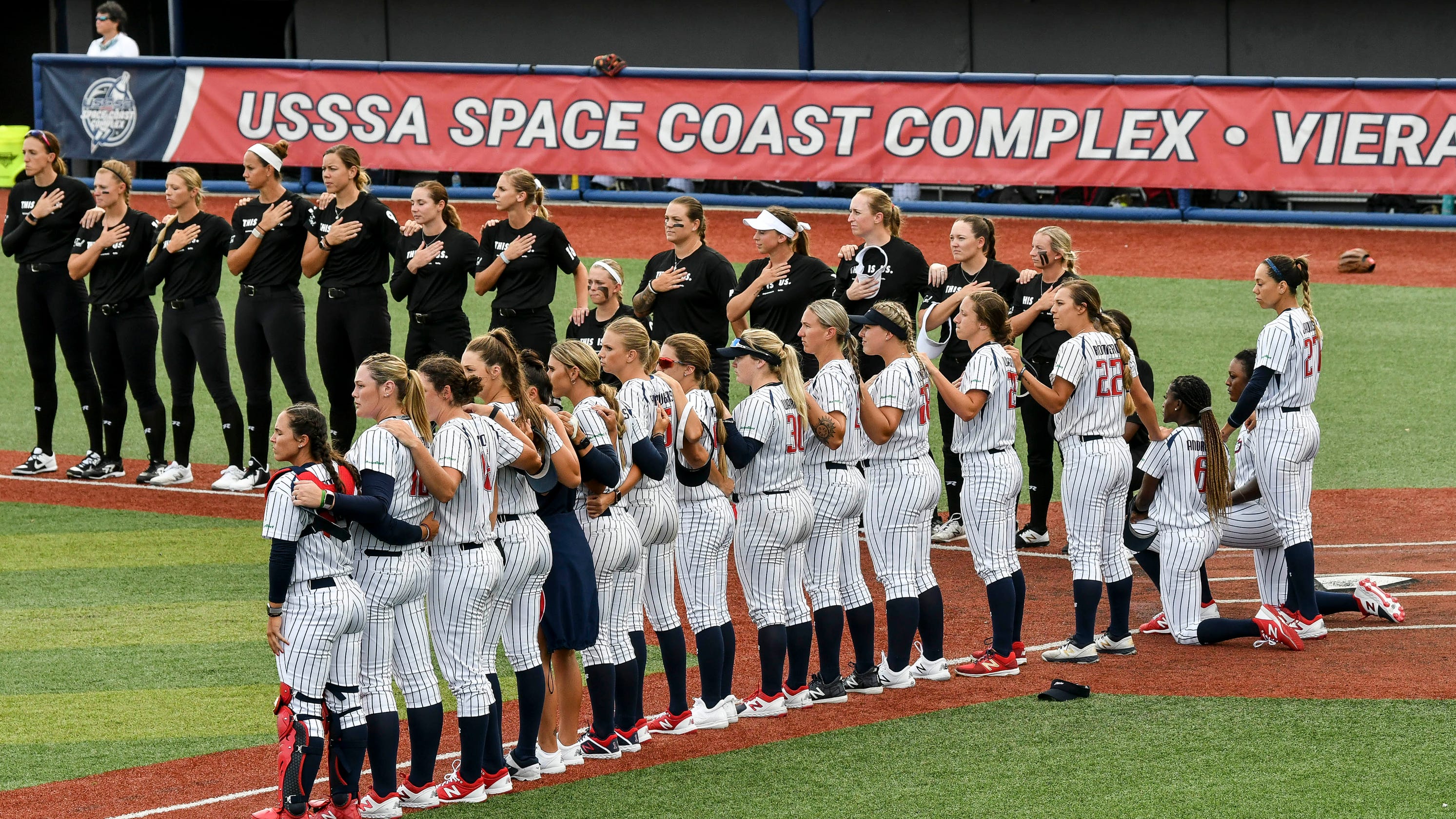 VIERA, Florida — Wearing black socks, pants and jerseys with the words “THIS IS US” across their chests, a newly organized pro softball team delivered a message of unity off the field Saturday night and also scored a major victory on it in their historic opener.

Five days after disenfranchising themselves from the Texas-based Scrap Yard Dawgs following a since-deleted general manager’s tweet regarding the national anthem and aimed at President Trump, the 18 players, plus coaches, were back on the field doing what they do best.

Team USA pitchers Keilani Ricketts and Cat Osterman — part of 11 Olympic players traveling with the team this summer — combined for seven strikeouts in the 3-1 victory against the USSSA Pride, the reigning two-time National Pro Fastpitch champions.

“Just because something may seem negative, we showed you can always turn it into a positive,” said first baseman Sam Fischer. “And not be afraid in doing so.”

“This Is Us” began appearing on players’ Twitter handles Thursday. The next day, the team released a black-and-white video, which was shown to fans at the USSSA Space Coast Complex in the top of the fifth inning as players stood along the first base line.

“While we were playing our first game of the season, a tweet was sent out on behalf of the organization that was insensitive, offensive and ignorant to the movement going on in this country,” Fischer says in the video.

The video had garnered more than 22,000 views as of Saturday morning, drawing  comments such as: “We stand behind you all the way” and “So proud of you ladies! … What a great example you have all shown to the softball community.”

ESPN’s Holly Rowe, a veteran sideline reporter during the NCAA softball postseason, also chimed in on Twitter: “I hope some big corporation gets behind this team and supports them. It takes courage to walk out on your job for what you believe. Go Ladies!!! I am donating immediately!!!!”

I hope some big corporation gets behind this team and supports them. It takes courage to walk out on your job for what you believe. Go Ladies!!! I am donating immediately!!!! ❤️ https://t.co/BoDaovRv6G

The new team’s mission statement says it is “here to spark a necessary change in the softball community, gaining and sharing knowledge about racial injustice in our world.”

Fischer said the capitalized names on the back of the players’ jerseys are to acknowledge Black players, past and present, who have played and coached the game.

“I wore Natasha Watley’s name because when I came up I started out as a shortstop and just idolized the way she played,” Fischer said of the Olympian from UCLA.

Here’s a look at the backs of some shirts in the This Is Us infield. pic.twitter.com/3v4iteQmqe

Monday night, the Dawgs lost 4-0 to the Pride in what was the first professional team sports competition in the U.S. following the coronavirus pandemic shutdown of most athletics in March.

By the time the players gathered in the locker room, word got out that GM Connie May had put up a personal tweet on the team’s official site, catching players off guard.

The confrontation between players and May lasted nearly an hour before Kiki Stokes, the only Black player on the roster, walked out first.

“I felt alone, isolated, very confused,” the Nebraska star told many of the estimated 250 fans who stayed after Saturday’s game for a panel discussion. “I represented the organization for five years. A team I trusted. But I was let down and felt betrayed.

“But the people (teammates) in that room moved mountains for me. I’m so grateful for this team and I’m excited to see what we’re going to do in the future for the sport and for the community.”

This Is Us Softball made history tonight. These athletes used their voice for the betterment of this world, and I have never been more proud to be a part of a team. This is a night I will never forget.

Stokes said it took “just seconds” for the rest of the team to follow her out the door, leaving contracts behind and an uncertain future loaded with questions but not regrets.

Teammate Sam Show, known for her familiar home run bat-flip at Oklahoma State, said she was worried if she had done the right thing after walking out on her first pro contract.

“I don’t like crying in front of people but I did this week,” she said. “I knew it was right. Showing the softball world what you believe in and finding your happiness (made it the correct decision).”

Show and Stokes, along with the Pride’s Shay Knighten and A.J. Andrews, took a knee during Saturday’s national anthem. Both teams stood together, arm in arm, for a moment of silence following the game.

Stokes, the leadoff hitter in Saturday’s game, had been the first player drafted by the Dawgs after they became a franchise late in 2015.

“It’s been an emotional, overwhelming week for me and my teammates,” she said. “To see my teammates stepping up and speaking up for me was so powerful.”

Former Florida star and Team USA catcher Aubree Munro said she’s been trying to educate herself on the latest racial uptick during the past four months.

“Inside that locker room, just seeing the hurt on her face, on someone like Kiki, that was my moment of clarity,” Munro said.

Fischer, wife of an Air Force veteran, said after a few days of players’ meetings on how to proceed, they finally met with Pride players Friday and told them about “This Is Us.” Saturday’s game was soon announced, and donations through online ticket sales at http://thisisussoftball.com/donate had brought in $36,454 as of late Saturday.

Their jerseys, originally to have been for batting practice, were donated by 5 Tool Sport out of Texas. Other donations are likely to come.

Another game takes place Monday night in Viera, which could be the site of many of the other summer games that had been originally set for Conroe, Texas. That announcement will be made soon on the Pride’s website.

In Saturday night’s game, former University of Florida slugger Amanda Lorenz, who earlier made an outstanding diving catch for the Pride in left field, slammed a long home run off Osterman in the sixth inning to cut the deficit to 2-1 and had a chance to tie it in the seventh before striking out to end the game.

“It was a release,” Escobedo said of finally playing again. “It was meant to be.”

Soon, she and Fischer — her teammate on the Dawgs the past two years before being traded to the Pride — will be living on the same street in Phoenix, Arizona.

“I’ve got a batting cage set up,” Escobedo said, laughing.

Fischer said the team’s walkout won’t sit well with everyone, of course. But it did connect with Watley, the first Black female to play on the U.S. softball team in the Olympics. She was quoted in a tweet, saying: “We’re already getting paid pennies and now we’re going to get paid nothing to stand up for this. That’s how much it matters.”

Veteran Monica Abbott, 34, considered the sport’s top pitcher in the world, would likely stand the most to lose. Abbott, a Team USA Olympian who also plays professionally in Japan, reportedly signed a six-year deal worth an estimated $1 million in 2016, when the Scrap Yard Dawgs were starting to take shape.

In January of 2018, apparent financial troubles beset the Dawgs, who were booted from the National Pro Fastpitch circuit after what was reported to be repeated violations of the team’s franchise agreement, including the team’s repeated failure to make timely payments to players, vendors and the league.

Even prior to the This Is Us movement, Stokes said she already is seeing the positives.

“I’m already seeing little black girls out there running around,” she said. “When I was younger, I was told, ‘You play a white sport.’ I didn’t feel that way. I’ve always felt like, just because I’m not white, I can still bring something back to the table.”

Her message is simple:

“We will make a change. This is our story. This is a new beginning.”