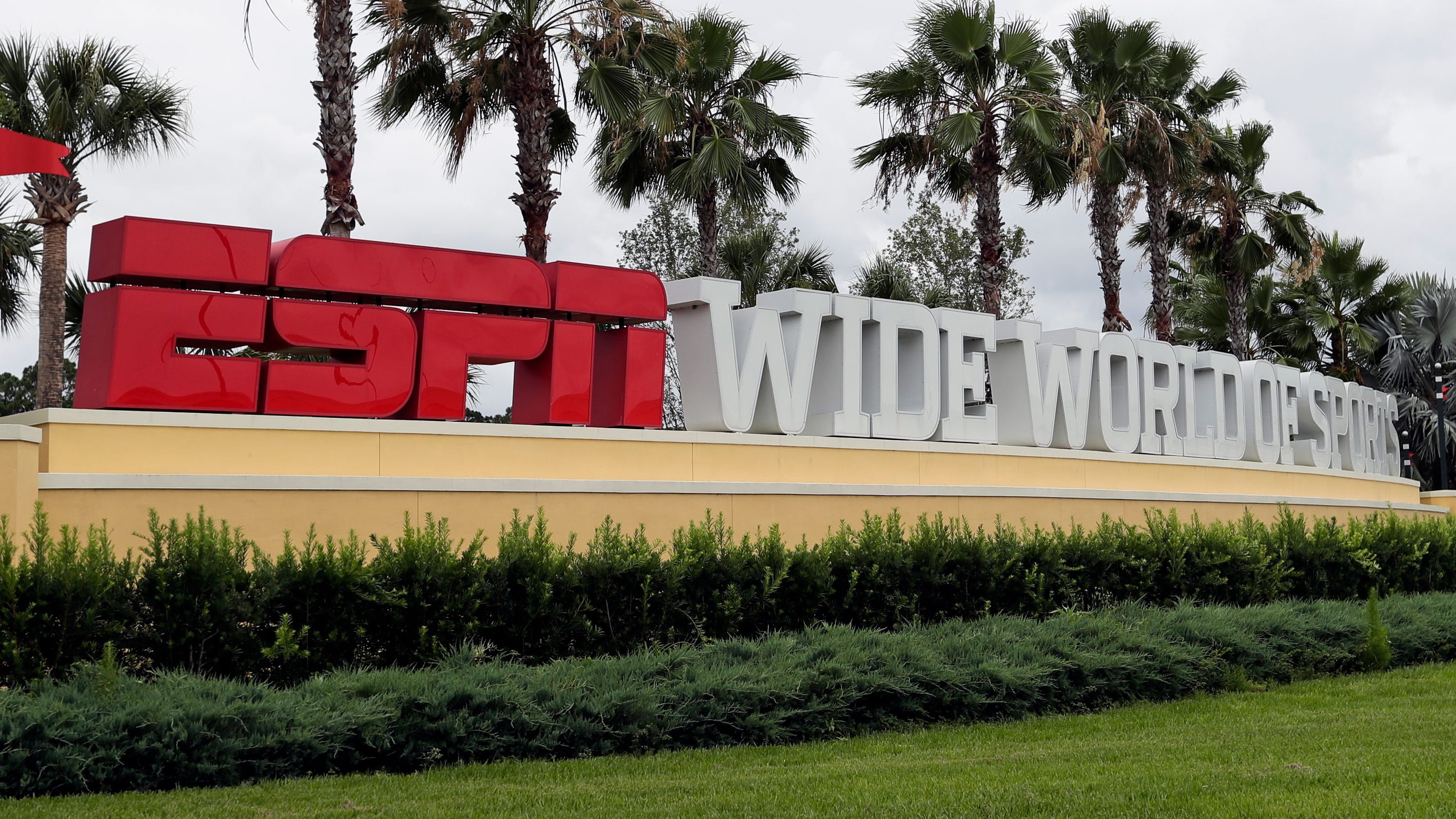 How Disney employees will work inside bubble site

Will Disney restore the Magic Kingdom? Or will it oversee a Mickey Mouse operation?

The NBA will resume its season on July 30 at ESPN’s Wide World of Sports complex near Orlando, hoping the quarantined site can become a small world after all with nearby game and practice venues, luxury hotels and various restaurants. The NBA outlined 113 pages of health and safety protocols that detail daily COVID-19 testing, contact tracing and numerous social distancing rules. Yet, the NBA cannot exactly sing “Hakuna Matata” and predict no worries for the rest of their days.

On a conference call Friday with reporters, NBA Commissioner Adam Silver acknowledged “the level of concern has increased” amid nationwide rises in both positive tests and deaths related to the novel coronavirus. Florida also has been among the most affected states recently. Therefore, Silver conceded that “no options are risk-free right now.” Yet, the NBA has maintained relative optimism with the setup for reasons beyond consulting various health officials.

“One of the reasons we selected Orlando was because of Disney,” Silver said, “and our longtime partnership with them and our confidence in them as operators.”

Some Disney workers have signed a petition to keep properties closed

Not everyone has shared that optimism.

Just under 16,000 people signed a petition addressed to Orange County Mayor Jerry Demings and Orlando Mayor Buddy Dyer to delay the opening of Walt Disney World scheduled for July 11. Though it cannot be independently confirmed who signed the petition, it is presented as if they are Disney employees.

“This virus is not gone, unfortunately it’s only become worse in this state,” the petition reads. “Having our theme parks remain closed until cases are steadily decreasing would keep our guests, our employees and their families safe. Re-opening the theme parks is only putting our guests, employees, and families at higher risk for contracting COVID-19. While theme parks are a great way to relax and enjoy free time, it is a non-essential business; it is not fair to the people who work there to risk their lives, especially if they are at risk or have family members who are at risk. People are more important than making a profit.”

Disney spokesperson Andrea Finger declined to comment, but she passed along a statement that Dr. Pamela Hymel, Disney Parks’ Chief Medical Officer posted June 18 on the company’s website. Hymel outlined the various protocols Disney will take, including temperature checks for guests, increased cleaning and disinfecting, social distancing, required face coverings and options for contact-less payments. Hymel added, “as we prepare for the reopening of our destinations, this is a responsibility we take very seriously.”

“I support people’s rights to express that point of view. We have members that have the opposite point of view and everywhere in between,” said Jeremy Haicken, president of UNITE HERE Local 737, the union which represents workers in Walt Disney World Food & Beverage and Housekeeping. “The bigger question is Florida has a completely broken unemployment system where workers are faced with this choice to starve or go back to work in a dangerous environment. About 30% of our members have not received a penny in unemployment in ten weeks. It is absolutely criminal that workers are being forced to choose between starving and going back to work in this environment.”

Nonetheless, union members stressed they have negotiated various health protocols with Disney to ensure employees are safe. The NBA’s quarantined site will not be open to the general public as Disney World will be. Yet, these measures offer a window into how Disney’s employees will handle the venues and hotels that the NBA will use.

“Disney is doing an excellent job,” said Eric Clinton, the president of UNITE HERE Local 362, which oversees the custodians and ride operators at Disney World. “I’ve been a harsh critic of them over the years, but I’ve been blown away by how they have responded. Disney is going to do this safely. They have a good plan and they’re a sophisticated company. So is the NBA.”

Health officials offered mostly rave reviews about the NBA’s 113-page health and safety protocols, both for its preparation and depth. Yet, some health officials and those in NBA circles wondered why Disney employees would not be subject to quarantine procedures as NBA players, coaches and staff members are required.

“I don’t think any reasonable person would say that was a real possibility. You’re talking about hundreds, maybe thousands, of workers in these hotels that would never see their family for three months,” Clinton said. “These are a mix of single parents, mixed families, joint families, all with kids. They’re all very diverse. They are immigrants and people of color. There is absolutely no way someone should expect a housekeeper who makes $15 an hour not to see her children for however long this is going to go on.”

Haicken said union officials plan to have more conversations with Disney this week about how the unspecified number of employees will manage the NBA’s campus site. But the NBA has already outlined various guidelines in its protocols for how Disney workers will operate at the hotels used: the Gran Destino Tower at Coronado Springs, the Grand Floridian and the Yacht Club.

The NBA stated that “in no event may a Disney cast member deliver luggage personally inside a player or staff member’s room.” It said Disney workers will only clean a hotel room when players, coaches and staff members are not present. Employees are expected to clean those rooms during scheduled practice, shootarounds and games.

SportsPulse: The NBA spelled out its safety guidelines for teams as they enter the Disney bubble next month in 108 pages of documents. Jeff Zillgitt dug deep to find the most interesting, and rather humorous, guidelines.

To minimize foot traffic, housekeeping staff will service rooms once a week but can increase services upon request. As for public spaces, Clinton said housekeepers will routinely sanitize the elevator, lobby and hand rails. Public restrooms will also be closed every two hours for cleaning. NBA guidelines added housekeepers will frequently clean, disinfect and sanitize high-touch surfaces (every two hours), medium-touch areas (every two to four hours) and low-touch areas (every eight hours or once daily).

They will have other responsibilities, too. When teams begin their quarantine between July 7 and 11, Disney employees will arrange for meal delivery to be placed outside each person’s room. They will clean and disinfect training and practice equipment in between uses after a team leaves the area. While teams will be responsible for their own laundry, Disney employees will clean the hotel linens. Disney will also staff take-out restaurants with the same employees to eliminate staff turnover. They will all be required to wear masks and gloves, while staying at least six feet apart.

Said Clinton: “They’re going to be scheduled and trained in a way not to interact with the players as much as possible.”

Why Disney is not testing employees for COVID-19

The NBA will have daily testing for players, coaches and staff members. Why won’t Disney do the same for its employees?

“We wanted it to be done regularly, but that was a very large expense to them,” said Clinton, who expressed uncertainty about the exact cost. “They felt if they put in self-assessment at home and when you get to the work place, that would be enough.”

What do those assessments entail?

Every day, Disney employees will take their temperature at home. If they have a temperature over 100.4 degrees, they are required to call in sick to work. They will take another temperature check when they arrive on Disney property to ensure it is not over 100.4, or they will have to return home. Employees will also have to report any symptoms, including coughing, difficulty breathing, chills, muscle pain, loss of taste or smell, sore throat, nausea, diarrhea and vomiting. They will also have to report if they have been in close contact with anyone diagnosed with COVID-19 in the prior 14 days. Employees will be sent home if they answer affirmatively to any of those questions.

So employees do not feel pressured to work with any illnesses, Disney will pay them for sick days. Disney will also pay any employees that have to self-quarantine should they be diagnosed with COVID-19, regardless of where it originated. But why does Disney and its unions not feel overly concerned about the lack of testing?

“I think having testing would be great. But testing alone does not guarantee that the illness is not transmitted,” Haiken said. “Someone can get positive test results a few days late and you already spread the illness. There are a lot of people calling for testing with workers. It’s a very difficult setup, unless you somehow test every day and not allow people to work while they have the results and then pay them while they’re not working. Testing is also not a foolproof method of guaranteeing safety in a particular workplace.”

Regardless, the NBA said in its health and safety protocols that the league, players union and Disney “will continue to monitor the ongoing coronavirus situation, including as local, state and national public health recommendations evolve, new or different technologies become available (e.g., related to diagnostic testing or contact tracing), and emerging evidence continues to inform best practices for prevention, control, and mitigation strategies.”

“We are continuing to work with Disney on the testing of at least a subset of their employees that could potentially be in the same room with our players and anyone else who’s tested daily on our campus,” Silver said. “So we are satisfied that once we work through those additional measures with Disney, we will continue to have a safe setting for us to resume our season.”

The NBA and Disney will find out soon enough whether they prepared for the chance of a lifetime.