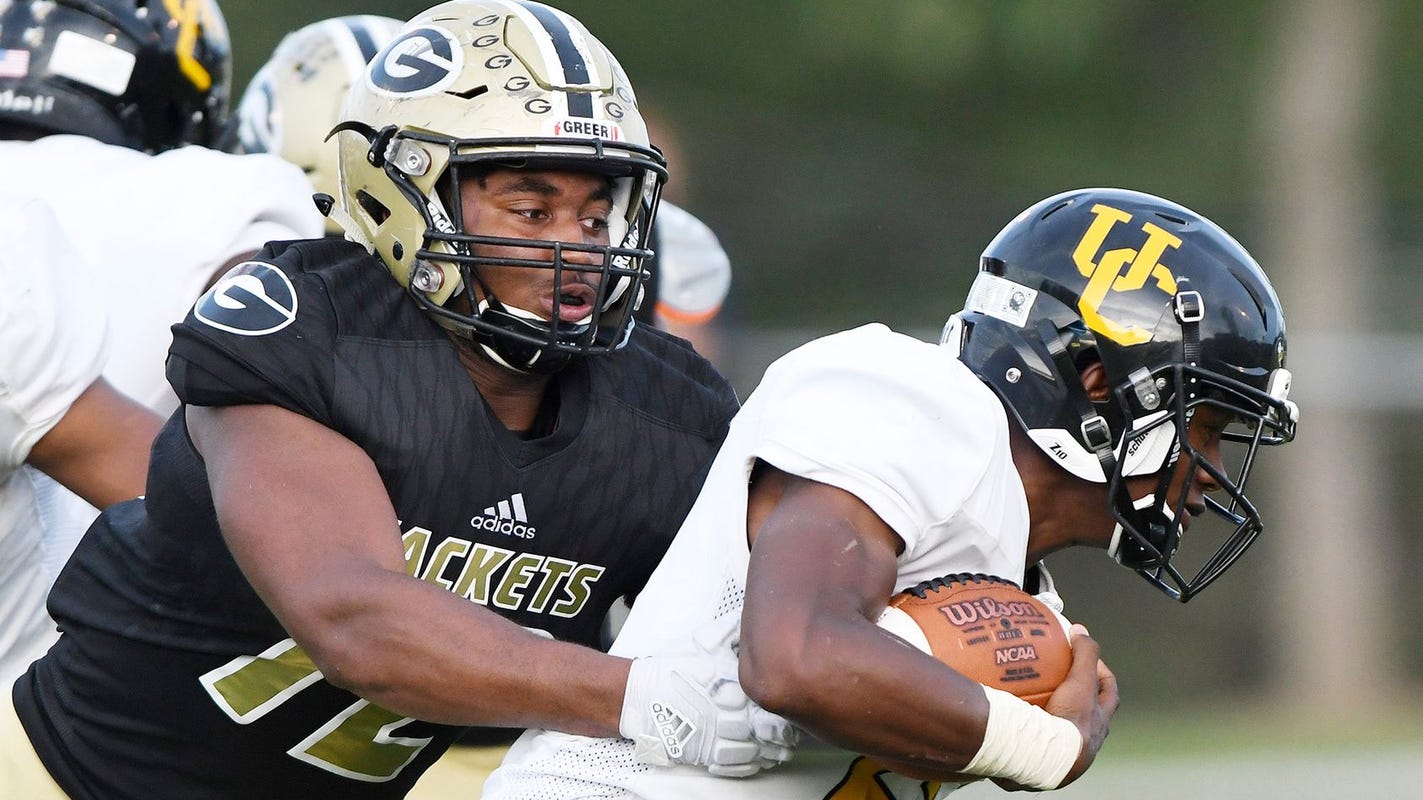 Days before signing day in February, Greer (S.C.) High School football defensive line standout Jakyre Kerns was hanging out with his friends when he got a text message from someone whom he thought was a coach at Stanford University.

Kerns was set to sign to play at Charleston Southern, an opportunity he was excited about, but he had to pay attention when one of the most prestigious academic schools and a member of the PAC-12 conference came calling.

The coach offered Kerns a scholarship to play football, and he was filled with excitement.

Kerns called Greer running backs coach and recruiting coordinator Thomas Wilkes after he received the offer. That’s when the two started to do some Twitter detective work and realized the offer might be too good to be true.

The account claimed to be that of a real coach on the Stanford staff who recruited South Carolina. The problem was the coach repeatedly identified the school a “The University of Stanford” instead of the correct “Stanford University.”

Greer defensive end Jakyre Kerns, left, investigated after receiving a scholarship offer from what appeared to be a coach at a prestigious Division I football program. With help from a Greer assistant coach, he learned that the offer was a hoax. (Photo: EDDIE BURCH)

“After looking at the picture, it didn’t look too real,” Kerns said. “When I first saw it I believed it. It was a letdown. I felt tricked, but then again, I guess it wasn’t meant for me to be there.”

It’s a problem Wilkes has seen spike since last November: people pretending to be college coaches on social media and offering scholarships when they have no affiliation with the school.

Wilkes estimates that since November he has noticed over 30 of these accounts on Twitter, and knows he has probably missed some along the way.

The problem can become more sinister when these coaches start to ask recruits for money. Wilkes said he knows of situations where fake coaching accounts will direct message a player and say that if they pay anywhere between $15-$30 they can move their film to the top of the list to be evaluated.

No coach sees the film, and whoever is running the account becomes a little richer.

How to spot it

Wilkes said there are some telltale signs that an account is fake.

The most important thing for players and coaches to know is that no legitimate coach will ask a recruit for money during the recruiting process. If a coach asks for money, the account is fake.

He said another way to tell is to look at the spelling of a coach’s name on the account. Many scammers will try to pose as a coach who is actually on a staff but will have a slight misspelling of a name on the Twitter handle because Twitter doesn’t allow duplicate handles on its platform.

If an account is relatively new, that also is a red flag. If a coach is not interacting (retweets, likes of other tweets or mentions) with other coaches on the college’s staff, that should also cause concern.

Wilkes’ golden rule is that if an offer seems too good to be true it more than likely is.

Belton-Honea Path offensive lineman Jackson Hall was introduced to the recruiting process earlier than he expected. The rising junior started for a Bears team that finished 8-4 and advanced to the second round of the South Carolina Class AAAA playoffs in 2019. He followed that with a 2020 Region 1-AAAA weightlifting championship in February.

His run of success caught the attention of a Power 5 school: Virginia Tech.

“It was a bit of a shock, I didn’t think a school like that would be interested this early,” Hall said. “They came to one of my weightlifting classes and said they wanted me to come visit.”

Hall visited the campus in early March shortly before COVID-19 closed schools. He also has received interest from Furman, Notre Dame and Kentucky. During a time when recruiting has gone completely digital, Hall has come across fake profiles while scrolling through Twitter. Fortunately for him, he snuffed it quickly.

“I think it was a guy pretending to be a Kentucky coach,” Hall said. “I could kind of tell it was fake because Kentucky football wasn’t following them. You kind of have to look at who’s following who and, of course, if they’re verified or not.

“I haven’t actually talked to one yet, but since I have a little experience with it if they ask me something odd I can call (BHP football coach Russell Blackston) and he can tell me if it’s legit or not.”

For many high school athletes, their high school head coach is the go-to on all things in recruiting. Coaches go through measures to ensure that players and parents are well-informed about the process and what to expect.

“We have a parent meeting and we try to give them information on recruitment,” Wren High football coach Jeff Tate said. “Things to help them understand what schools like, don’t like and it’s also on the parent to get the kids to the schools so they can see what they’re getting into. It’s not a one-way street.”

To this point, Tate doesn’t think any of his players have met a fake profile. He and his staff have established an understanding with the players: If someone contacts them, notify Tate.

“For the most part, I know all the coaches,” Tate said. “I can reach out and say ‘so and so coach reached out’ and get a yes or no. I tell our kids there’s a lot of people out there that will try to fool you, make you think they’re something they’re not and you got to be weary of it.

“I think that’s one of the lowest things an adult can do … mislead a kid into thinking they have an offer.”

Landon Sauers, a rising senior at Crescent, is still navigating through the recruiting process. The utility player saw significant snaps at quarterback and linebacker last season, ultimately making the All-Region 1-AAA team and is adding tight end to his repertoire this fall.

He said he has offers from Presbyterian and University of New Mexico with interest from Charleston Southern, Coastal Carolina and Wofford, but since the COVID-19 outbreak his recruitment has slowed.

“A lot of coaches have their focus on their own team and how they’ll do things in the fall,” Sauers said.

In addition to his coaches at Crescent, Landon also relies on his dad, Ron, for help. There’s a steep learning curve for parents going through the process for the first time with their kids.

“It’s been a rough experience because it’s the first time I’ve went through it,” Ron Sauers said. “Unfortunately, there’s so much out there on social media of people trying to advertise to get your kid recruited and this and that to the point that you don’t know the process or how to go about doing it.”

In addition to other possible ways to get noticed such as recruiting services or posting a highlight reel to social media, the Sauerses found another strategy.

“I had (Landon) narrow down five schools he thinks he could play at and has his major,” Ron Sauers said. “We’ll contact those schools and send them everything we got: film, workouts, grades, etc., and that has seemed to do the best for us personally.

“He narrowed down the schools, local schools, and we tested that market. It’s been positive. Every single one responded.Two offered and others have him on sort of a watch list, so it really worked out good that way.”

Eastside coach Andre Woolcock balances his head coaching responsibilities with running college recruiting for the Eagles. He said he also has seen fake accounts pop up on Twitter.

“You have to be big time scum to stoop to that low of a level,” he said. “Recruiting is hard enough as it is.”

Whether money exchanges hands or not, Woolcock said he feels for the kids that are pursuing a dream and are easily exploitable because all they want to do is play football at the next level.

“I feel sorry for the kids, because a lot of times kids don’t understand,” he said. “They see a name, they get excited, and then you have a kid jumping the gun and getting excited thinking they got an offer.”

Wilkes said the likelihood of someone trying impersonate a coach from Clemson or South Carolina is low. Programs with large fan bases are quick to realize when a coach is real or fake, and the cost-benefit analysis of impersonating someone from a high-profile program usually isn’t profitable.

That means that players who are desperate for Division I attention are more likely to be targeted by scammers.

“A lot of times it’s not the kids at the end of the bench that’s getting these fake offers, it’s the kids that are busting their tails, doing everything right and for one reason or the other it hasn’t happened for them yet,” he said. “Those are the ones that get exploited because they’re most vulnerable. They want it so bad.”

Kerns was fortunate. No money exchanged hands; no announcements were made on Twitter, and he didn’t pivot away from the opportunity at Charleston Southern.

Wilkes said one of the toughest parts of his job is telling a player that the dream offer they think they have from a school is probably not real.

“The main thing for us is we try to develop the relationships with those kids so that they know we have their best interests at heart and they trust us, but anytime you have to tell a kid that, it sucks,” he said. “It’s tough because you know how excited that kid is. It’s like telling them Santa Claus isn’t real.”