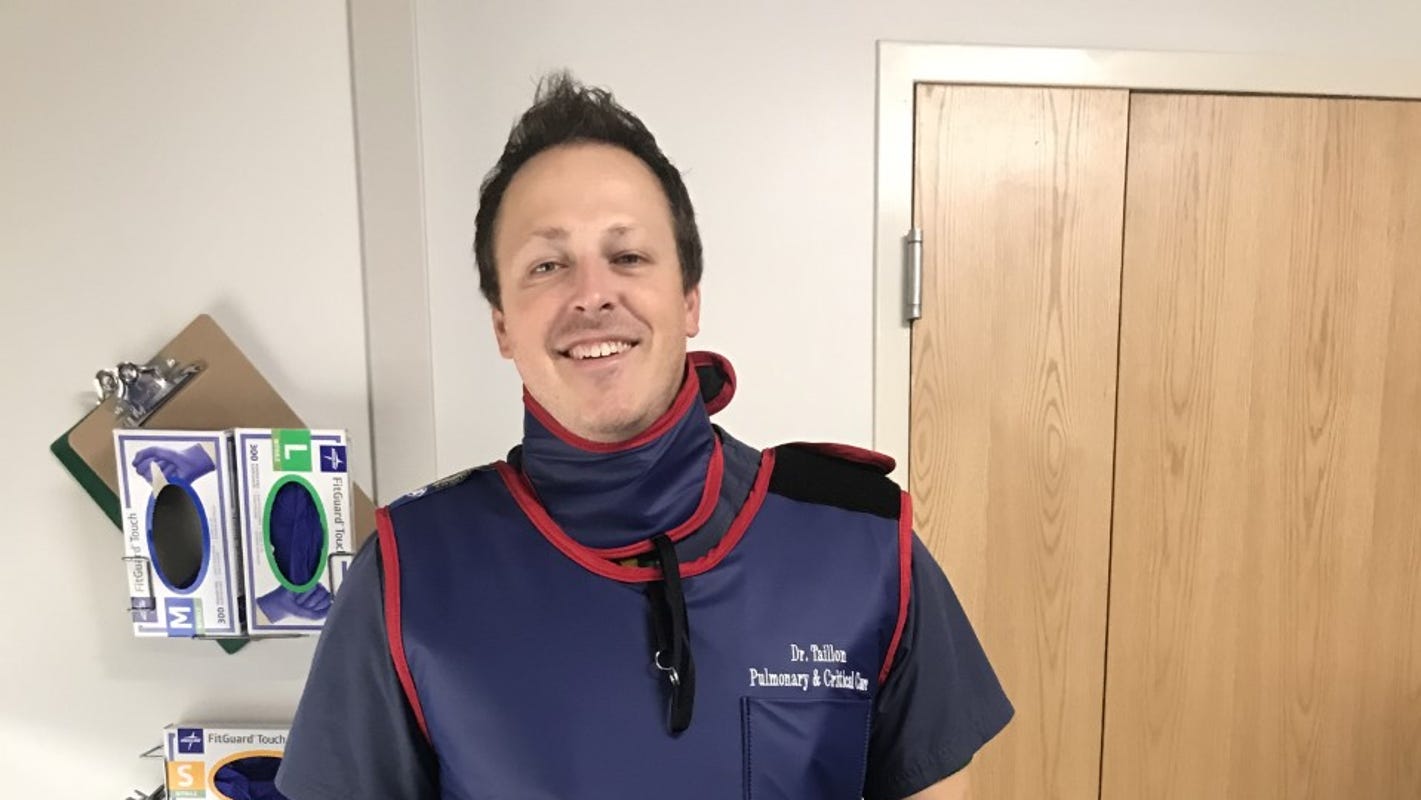 Dr. Jordan Taillon has grown accustomed to the spotlight being on his younger brother Jameson.

That’s what happens when your little brother happens to be the ace of a Major League Baseball pitching staff, which Jameson has become for the Pittsburgh Pirates.

But Jordan has been front and center in the battle against coronavirus. In a span of 39 days in May and June, the Cape Coral, Florida, resident was on duty for all but two days between shifts at Cape Coral Hospital, Lee Memorial Hospital and Gulf Coast Medical Center. Specializing as a pulmonologist and critical care specialist, he’s spent the bulk of his recent workload in the ICU.

“Something like this really makes you realize your passion,” Jordan said. “If you’re working 37 out of 39 days and you don’t burn out and you’re almost looking forward to going back to fight this, it makes you realize, I made the right decision to go into medicine. I’m where God put me and this is where I’m supposed to be.” 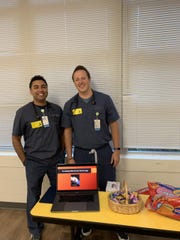 Dr. Jordan Taillon is a pulmonologist and critical care specialist in the Lee Health system but has been on the front lines working in the ICU during the coronavirus pandemic. (Photo: Jordan Taillon)

Jameson is not surprised that his brother put his own safety behind others having grown up with him as a natural leader to follow.

“He has incredible leadership qualities and he’s really always had those,” Jameson Taillon said. “I think he was born with something a little bit different as far as being a leader. He grew up playing sports, he played tennis in college and learned the value of being on a team and making others better.”

Jordan was a three-time All-American on the tennis team at Trinity University in San Antonio and developed his own way of learning to handle whatever was thrown at him. Graduating from medical school at St. Matthews University in 2010, he began his residency at New York Methodist Hospital in Brooklyn. Finishing his fellowship in Pulmonary and Critical Care, his work brought him to Southwest Florida in 2016.

Jordan believes Southwest Florida has fared relatively well but like all in his profession, he’s keeping an eye on data and the recent surge in positive cases.

“I think Southwest Florida had the benefit of being a little bit behind that initial curve to where we had time to realize that this is for real,” the 37-year-old said. “This isn’t just something that might get bigger, it got big. Southwest Florida I think as a whole has done a pretty good job.”

Dealing in a high-stress environment, Jordan admits keeping morale high among health workers has been a challenge. A member of City First Church of Cape Coral, Jordan was asked by pastor Chris Merz what they could do to show their support and appreciation to first responders. 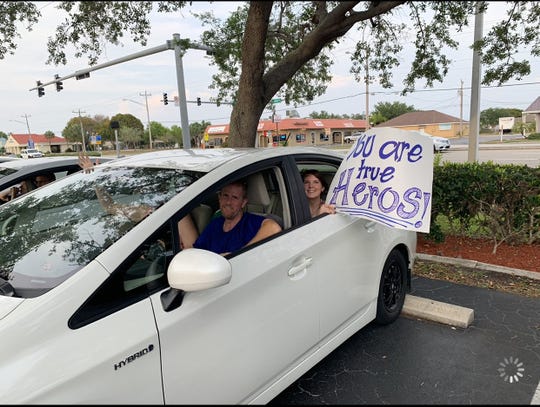 Dr. Jordan Taillon of Cape Coral has been working on the front lines in the fight against COVID-19. His church, the City First Church of Cape Coral organized an event called Park and Pray where a caravan of cars drove to Cape Coral Hospital with signs of support and applause for medical staff. (Photo: Jordan Taillon)

With the church being close to Cape Coral Hospital, an event with social distancing in mind called Park and Pray brought a caravan of cars to the hospital parking lot with signs, horns blaring and rounds of applause at shift changes.

The outreach meant the world to Jordan and his co-workers and made them feel like all-stars.

“It was one of the most uplifting, awesome moments I’ve had in a long time,” he said. “It almost made me tear up, it was just so overwhelming to feel that support and the emotional release of having that support. Knowing that your community is 100 percent behind you and they want to cheer for you and do everything they can to uplift you, it’s the most amazing feeling. It makes you realize how important the community is because that’s who we’re fighting for in the hospital, the entire community.”

Although not in the medical profession, Jameson, 28, has spent plenty of time around doctors in his career. The 6-foot-5 right-hander underwent Tommy John elbow surgery in 2014 and missed the 2015 season due to a sports hernia. After breaking into the big leagues in 2016, he was diagnosed with testicular cancer during the 2017 season but managed to return for the Pirates that same season after treatment.

He overcame all those setbacks with the doctor in his family there for support and Jameson emerged as one of baseball’s promising talents. He went 14-10 in 2018 with a 3.20 ERA and 179 strikeouts in 191 innings. But the injury bug struck again as another arm injury led to second Tommy John elbow surgery in August 2019.

While his MLB career is paused much like the rest of the sports world, seeing how first responders like his brother have rallied together to keep people safe has brought Jameson a sense of pride knowing the dangers Jordan faces every day he goes to work.

“We have four kids in our family, and I know our parents are really proud of all of us being successful in our fields and Jordan’s taken a lot of interest in my career being a sports fan,” Jameson said. “Now that sports and really the whole world are on hold with the virus, I think we’ve all been extra appreciative of him.”

With everyday life being impacted by COVID-19, Jameson has been able to work through his latest rehabilitation process without hesitation thanks to the comfort of words given to him from health professionals that he wouldn’t be more at risk given his health history. 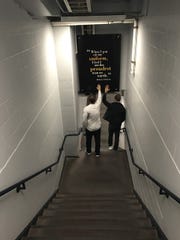 Pittsburgh Pirates pitcher Jameson Taillon and his older brother Jordan (left) touch a sign depicting a slogan said by the late Roberto Clemente with the Pirate Hall of Famer stating, “When I put on my uniform, I feel I am the proudest man on earth.” (Photo: Jordan Taillon)

As discussions within MLB continue whether or not an abbreviated season will be conducted, Taillon is determined to return to the field stronger than ever whenever that point will come.

“I had asked our team doctor, asked Jordan, asked my oncologist if I would be at any higher risk than anyone else,” Jameson Taillon said. “My white blood cell count had dropped pretty low, so I was a little worried but I’ve obviously been a bit more cautious than most. I go to the field, get my work in, I’m throwing and been avoiding group settings.”

As if he needed any more reminders of his purpose, Jordan reflects on a picture of himself and Jameson taken at PNC Park in Pittsburgh. In the photo, the brothers are side-by-side touching a sign of the late Roberto Clemente with his famous quote, “When I put on my uniform, I feel I am the proudest man on earth.”

“That photo has a completely different meaning for me now,” Jordan said. “We put on our scrubs, put on our masks and it’s a different kind of uniform but it’s the same thing with this COVID-19 fight.”