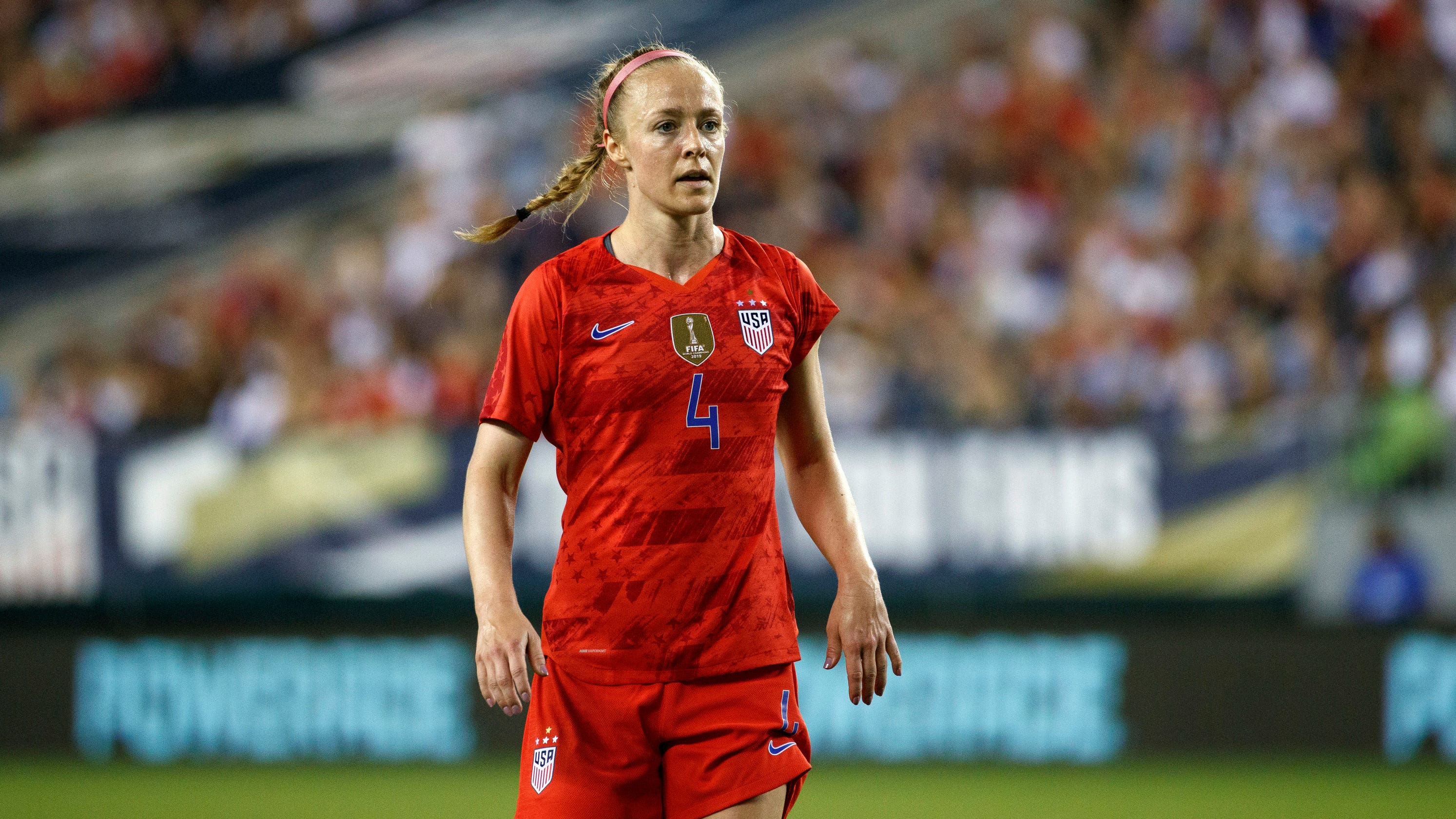 New NWSL Commissioner Lisa Baird had big plans to capitalize on the increased interest in the league that followed last summer’s World Cup.

This wasn’t exactly what she had in mind.

With the COVID-19 pandemic still wreaking havoc on the traditional sports calendar, the NWSL is going to be the only game around for the next several weeks. The Challenge Cup begins Saturday in suburban Salt Lake City, making the NWSL the first major professional league in the United States to return to play.

The 23-game tournament runs through July 26. With Major League Baseball having squandered the chance to return by the Fourth of July, and the NBA, WNBA and NHL not scheduled to return until the end of July, the country’s sports fans will be a captive audience for the entire tournament.

Becky Sauerbrunn of the Portland Thorns will be among the members of the U.S. World Cup-winning team to participate in the Challenge Cup starting this weekend. (Photo: Matt Slocum, AP)

Major League Soccer plans to return July 8, but even that is two weeks after the NWSL.

“It was not my intent to be the first. I didn’t set that as the goal,” said Baird, who was hired as commissioner March 10, two days before the NWSL shut down its preseason because of the pandemic.

“(But) we’re going to take full advantage of the sports spotlight,” Baird said. “We need to.”

The country was enthralled with the U.S. women last summer as they won their fourth World Cup title. TV ratings were massive, as were the the crowds who turned out for the team’s party in New York and its victory tour.

That enthusiasm carried over to the NWSL, which features all 23 members of the World Cup team as well as several international stars. The Chicago Red Stars had to open extra seating in their stadium. Sky Blue FC, which had struggled to draw at its stadium at Rutgers, suddenly was getting enough fans to make a permanent move to the larger, more accessible Red Bull Stadium in the offseason.

WHY DO WE LOVE SPORTS? These are our — and your — best memories of that first spark

Sponsors took notice, eager to show their support for the U.S. women’s equal pay fight. Budweiser signed on during the World Cup, while P&G bought tickets to games late in the season.

That interest hasn’t waned. P&G and Secret are presenting sponsors of the Challenge Cup, while the NWSL announced a multi-year deal with Verizon along with plans for the league’s return. It also has broadcast and streaming deals with CBS and Twitch.

The opener of the Challenge Cup and the title game will be broadcast on the main CBS network, and all 23 games will be available on CBS All Access.

There is a small, but very devoted fan base for women’s soccer. While Baird wants to keep them happy, she also hopes to appeal to general sports fans and the folks who tune in for the World Cup or the Olympics.

Megan Rapinoe, the star of last summer’s World Cup, is skipping the tournament, while U.S. teammates Tobin Heath and Christen Press withdrew because of COVID concerns. Alex Morgan, who had a baby earlier this month, and Carli Lloyd, who recently injured her knee, will also be absent.

“This is a chance to tell a lot of stories. And also to tell the stories of the teams, where they are, what is their tie to the community,” Baird said. “So we’re doing everything we can to take advantage of that.”

One story Baird and the NWSL didn’t anticipate was a team having to drop out of the tournament because of the coronavirus. The Orlando Pride withdrew this week after six players and four staff members tested positive for the virus.

Any player who tests positive is prohibited from full training for a minimum of 14 days, making it all but impossible for the Pride to participate in the tournament.

The NWSL said it was doing “robust testing” on all of the teams, and there had been no other positive tests. But Baird is not naïve enough to expect there won’t be some as the tournament progresses.

“This is an uncontrollable virus,” she said. “All you can do is mitigate risk.”

Like the other leagues, the NWSL has put together an extensive protocol, covering everything from the frequent tests that will be done to the “protective environment” in which players will live, train and play during the tournament. The NWSL partnered with ARUP Labs for testing, and also is working with the University of Utah and Intermountain Healthcare.

All players also were given the option of skipping the tournament. The NWSL and the NWSL Players Association also agreed on contract guarantees, and to provide insurance for players for the entire year.

“I’m excited about the plans that we put into place,” Baird said. “There’s also apprehension. I am a commissioner with three months’ experience. We’re going through being the first one back, and there will be more of a spotlight on that, good and bad, and doing it in COVID.”

With no vaccine and no widespread, effective treatment, there’s a risk in doing anything in this time of COVID. For Baird and the NWLS, they have to hope the reward in being the first to return is greater.