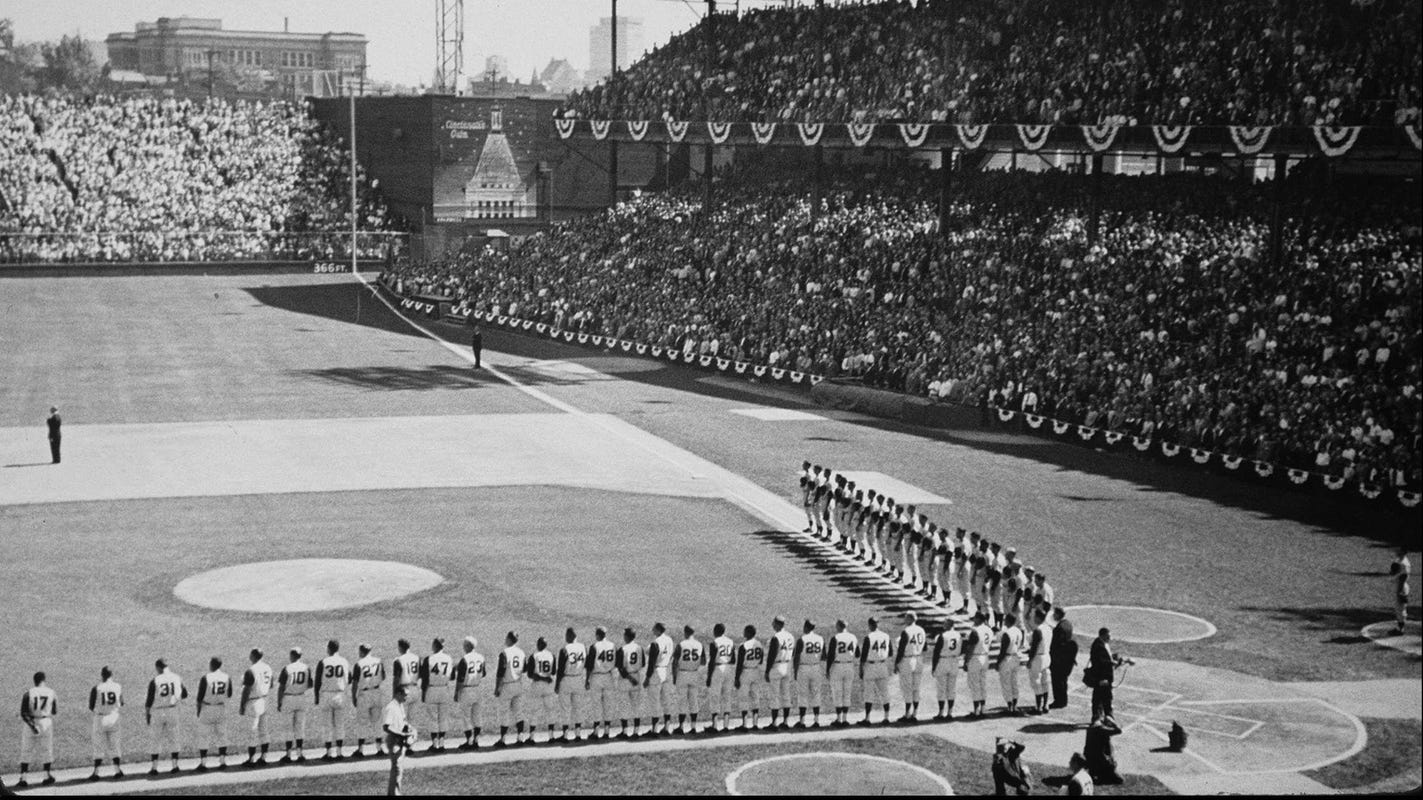 Why do I love sports? It was love at first sight at Crosley Field

We miss sports so much so that we started asking ourselves this question: What was the moment or reason that we fell in love with sports in the first place? Now we’re sharing the stories that answer that question. Our stories and yours.

The story below is from reader Bob Spitzfaden of Mt. Healthy, Ohio.

Don’t miss any of these memories by signing up for our daily newsletter, where we’ll be spotlighting our stories – and yours – each week. And email us at usatodaysports@usatoday.com to share the moment or reason that you first felt *that* connection with sports. Send us pictures if you can. We want to publish your stories on USA TODAY Sports and share it with our community.

Born in 1951, my father first took me to a Cincinnati Reds game in the mid-1950s. That game is the earliest memory I have my father and I recreating together. It was a night game, most likely in the first few months of the season. We drove to the game from our home in a suburb of Cincinnati, Mt. Healthy (named as such for having survived a cholera epidemic in the 1800s). It took roughly a half hour to drive to the game, where the Reds then were playing in the old Crosley Field. When we got about a mile from the neighborhood, there were men waving us into various parking spots. My father picked one, parked the car, paid the man, and we walked to the park – about a mile walk. I don’t remember the walk, just being waved down and parking. Nor do I remember getting into the stadium or walking under the stands.

Crosley Field was the home of the Cincinnati Reds and it made quite the impression on Bob Spitzfaden. (Photo: Handout)

What I do remember so vividly it is burned into my memory, as much as my first view of my newborn son, is walking through the tunnel into the stands and seeing the field for the first time. The lights were illuminating the field, so the field was swimming in the darkness of the night. The field was green, the green of well-watered Midwestern lawns.  The Reds in their brilliant home whites with red trimming were still on the field warming up. My first in-person sight of professional athletes. In those days, left field was a terrace sloping from the wall downwards towards home plate, with 1950s-era scoreboard looming over the terrace. The infield was that pale brown that is only found in professional baseball fields. That first sight of the field took my breath away, in the same way as my first view of the David.

My father had gotten tickets right behind the plate, a few rows up from the field itself, protected by the netting – my father saying that in the future we would have seats unprotected by the netting. Whether in that first glimpse of the field, or later during the game, with Vada Pinson in centerfield and Frank Robinson in right, it all launched my life-long love affair with both those players and the Reds. I think the Reds were playing the Phillies – but not really sure. The Reds lost 16-7, I think. I don’t really have a memory of the game itself, only that my father began teaching me how to score a game. No memory of our walk back to the car or drive home. It is that first glimpse of the field walking out of the tunnel that I fell in love with the Reds and baseball.

Fast forward to 1999. I’m living in Alaska but have gone home to spend a few days with my father. The Reds were chasing a spot in the playoffs and it’s the last home series of the season, against the Cardinals. My father and I have tickets to all three games. On the drive to one of the games, parking and walking into Riverfront Stadium, the Reds home at the time, we talked about our family history stretching back over several generations. The Reds won enough of those Cardinal games to keep their playoff hopes alive, but eventually tied with the hated Mets for the wild card and lost the play-in game. Those home games with the Cardinals were the last time I saw my father alive – he died suddenly two months later.

The Reds and baseball, the first and last experiences with my father.

That’s why I love sports.

WAKE UP RIGHT: Each day’s top sports stories — and more stories of why we all love sports

GOOD SPORTS: Weekly look at the stories of good throughout the sports world