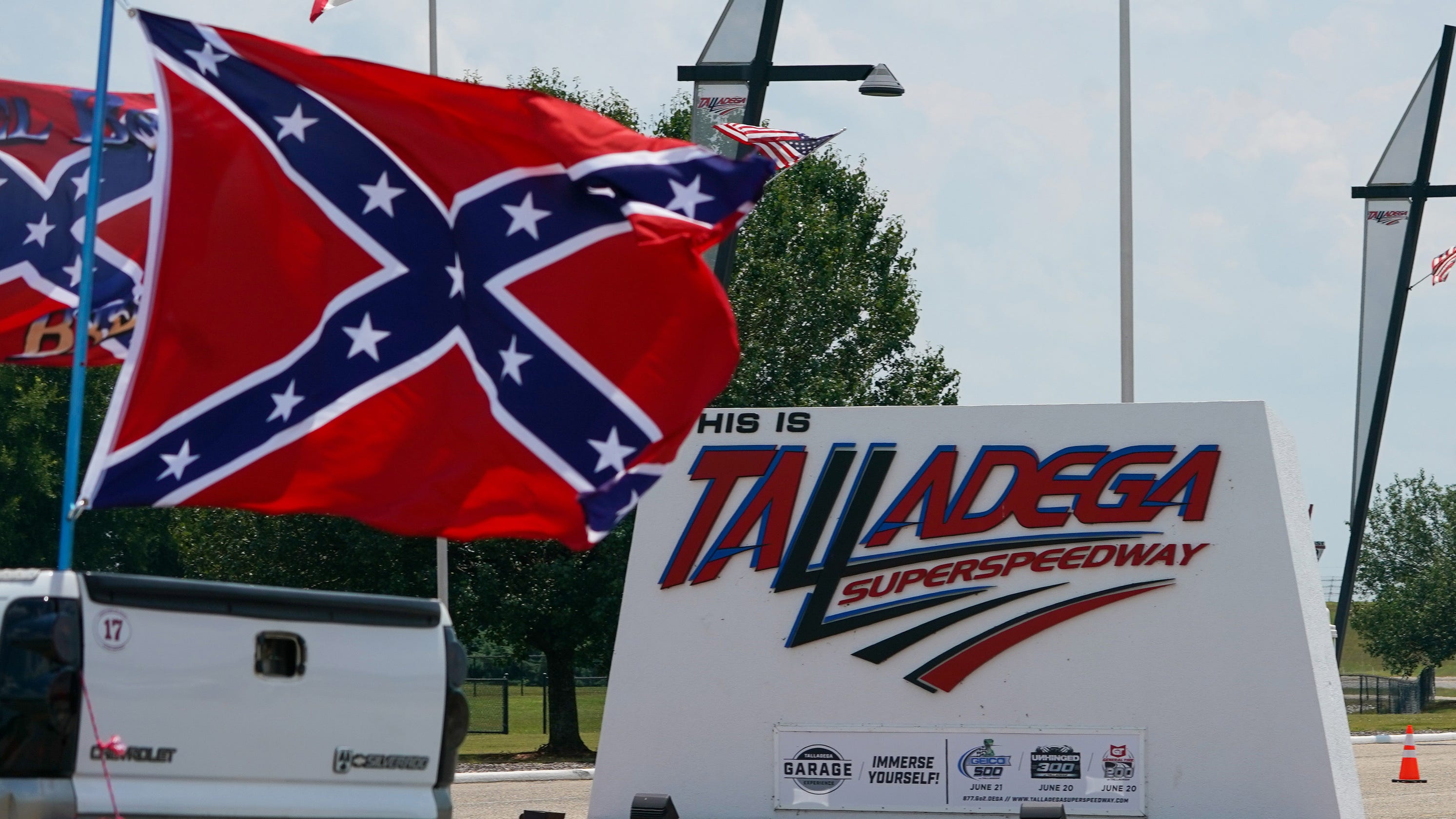 TALLADEGA, Ala. – The new and somewhat fractured world of NASCAR stopped in Alabama, long prime stock car racing country, over the weekend.

The result was one of the most bizarre and troubling scenarios in the 70-year history of America’s top form of stock car racing, and it included a jolting incident that sent shock waves through the sport – and beyond.

NASCAR said a noose was found Sunday afternoon in the track garage stall of driver Darrell “Bubba” Wallace and the No. 43 Richard Petty Motorsports team. Wallace, the only Black driver in NASCAR’s top series, has been outspoken about recent social unrest. NASCAR banned the Confederate flag from its speedways after Wallace took an aggressive stand against it.

NASCAR announced the discovery of the noose after Sunday’s scheduled GEICO 500 had been rained out and postponed to 3 p.m. (ET) Monday. Stock car’s governing body condemned the noose at a “heinous act” and pledged to find the individual responsible.

The U.S. Department of Justice and the FBI announced they are looking into the incident to  determine if federal law was broken. A Justice Department statement said, in part, “Regardless of whether federal charges can be brought, this type of action has no place in our society.”

NASCAR legend Richard Petty, who once drove the No. 43 Wallace now drives and is a partial owner of the team, went to Twitter and described the incident as a “filthy act” committed by a “sick person” and called for them to be identified and “swiftly and immediately expelled from NASCAR.”

Although Petty, 82, has not been at a NASCAR race since its return during the coronavirus pandemic, he planned to attend Monday afternoon to  support Wallace, FOX Sports and ESPN reported.

The NASCAR announcement was the most striking moment of a surreal weekend at NASCAR’s biggest speedway. At a track whose sprawling grandstands seat about 80,000, only a few thousand were allowed entry to the race because of the coronavirus. The huge campgrounds and parking areas around the track – party headquarters on typical race weekends – were largely empty.

Also missing from the track landscape was a long-time track staple – the Confederate flag.

Talladega Superspeedway has been a capital of stock car racing for most of the track’s 50-year existence. Here, fans love the bedrock families of stock car racing – the Earnhardts, the Allisons, the Pettys. They arrive in the colors of their favorite drivers, and they’re often raucous,  throwbacks to racing’s  rowdier days. For many years, the infield has been a stage for fun, frolic and, not incidentally, drunken shenanigans.

The racing and the revelry in the so-called “Heart of Dixie” has had a distinct Southern flavor. The track’s first press box was named in honor of the late Alabama governor George Wallace, one of the country’s most outspoken segregationists before modifying his views late in life. Wallace was a friend of NASCAR founder Bill France Sr., who built the Talladega track.

The four-lane highway fronting the speedway was busy Sunday – and not because of thousands of ticket-holders. This weekend was the first test of NASCAR’s new ban on the Confederate flag at a track in the Deep South, and many expected a culture clash of the highest order.

The result was limited but loud.

Ninety minutes before the scheduled start of Sunday’s race, a parade of about 25 pickup trucks, cars and motorcycles traveled the roads around the track, many flying one or more versions of the Confederate flag, some adorned with both the rebel flag and the American flag. Some carried signs: “Good By NASCAR.” “Our Colors Don’t Run. Never Have Never Will.” “No Racing. No More.” “Don’t Mess With Our Flag.”

Before the scheduled race start (and before pounding rain and lightning forced the postponement), a plane flew over the track pulling a banner that included a Confederate flag and the words “Defund NASCAR.”

In a Sunday tweet, NASCAR official Steve O’Donnell responded: “You won’t see a photo of a jackass flying a flag over the track here…but you will see this…Hope EVERYONE enjoys the race today.” The tweet included a photo of black and white hands in a handshake.

You won’t see a photo of a jackass flying a flag over the track here…but you will see this…Hope EVERYONE enjoys the race today. pic.twitter.com/ppwP1ggNjt

Supporters of NASCAR’s flag ban also were outside the track Sunday. A group of eight demonstrators, including several from nearby Anniston, gathered near the main entrance, holding signs in support of Black Lives Matter. One held an upside-down American flag with the words “Silence = Violence.”

The public displays were not unexpected. When NASCAR announced June 10 that the Confederate flag would be banned from its speedways and other properties after criticism of the flag by Wallace, social media blazed with responses – some positive, many negative.

The rebel emblem has been a mainstay at most NASCAR tracks throughout the sport’s history; indeed, it often was used on signage and in printed materials by speedways, particularly at Darlington Raceway in South Carolina, NASCAR’s first major track. A stylized D in the Darlington Raceway name once contained rebel flag artwork, and men dressed as Confederate soldiers were centerpieces of Darlington victory lanes for many years. Its spring race was named the Rebel 500 from 1960 until 1982.

In 2015, NASCAR asked fans to stop bringing Confederate flags to tracks, calling it an “offensive symbol.” That move was somewhat successful, but this month’s more aggressive decision to ban the flag, in large part a response to anti-racism protests across the country, cut much deeper into the fabric of a sport born and nourished in the South.

“The Confederate flag doesn’t have anything to do with racing,” said Eric Lee of Anniston. His white pickup was parked across from the speedway, huge Confederate and American flags flapping in the breeze from its bed. “NASCAR is killing itself. They’re trying to be politically correct. They’re scared of all the social action groups.”

Lee and several other people displaying Confederate flags near the track said they don’t plan to attend another NASCAR event because of the prohibition.

Kris Lackey of Anniston, among those gathered to support NASCAR’s decision, said he was at the track “because if we don’t keep at this, things like this will continue to happen and may get worse. We’re here because of the parade (of Confederate flag boosters) that’s coming.”

In a podcast, NASCAR president Steve Phelps said the organization doesn’t want “to exclude anyone from coming. And if there’s a group of people who feel like that is a flag makes them uncomfortable, it’s not something that we want as part of our racing. This sport should be about fun (and) should be about family, should be about community.”

The change in flag doctrine comes at a difficult time for NASCAR. The pandemic sidelined racing for two months, and, when competition returned May 17, no fans were allowed at tracks. Limited numbers were allowed two weeks ago at Homestead-Miami Speedway in Florida and at Talladega.

The sport has had attendance and television ratings challenges for more than a decade, and this year’s issues have created new drama. The tough stance against the Confederate flag, a beloved symbol for many but an offensive reminder of slavery and discrimination for others, could have a mixed impact. Devotees of the flag could abandon the sport, but there is optimism among NASCAR leaders that their decision will open racing’s gates to many who otherwise might react negatively to the flag.

“They’ll never let it go,” he said. “I understand there’s some kind of love for it (the Confederate flag), but the bigger story is what it means in the big picture. The South lost. Put the flag away. Let’s welcome everybody. You don’t see this in other sports.”

But Teresa Williams of Jacksonville, Alabama, who said her great-grandfather fought for the Confederacy, called the flag “a Southern thing. It’s about being Southern and being proud. My side lost, but we’re still proud. I don’t hate anyone.”

She wore a T-shirt with a small rebel flag on the front and “In my DNA” on the back.

NASCAR’s reaction to nationwide protests that have focused on racism and police brutality represents a sea change for a sport so long tied to Southern tradition. Movement away from core standards of the Old South was a slow train coming and an upending of decades-old tradition.

In 2006, Yahoo Sports surveyed many of the drivers then in the Cup Series and asked their opinions of the Confederate flag. Only Dale Earnhardt Jr. agreed to respond. Yahoo said every other driver (or team representative) refused to discuss the flag, some apparently fearing a response of any kind would alienate one group or another.

In dramatic contrast, a slate of drivers, including seven-time champion Jimmie Johnson, champions Kevin Harvick, Martin Truex Jr., Kurt and Kyle Busch as well as current Most Popular Driver Chase Elliott, issued a video June 7 in which they pledged to fight racial injustice and support movement toward positive social change.

SportsPulse: NASCAR, a predominantly white sport, has often been mum or passive when it comes to interjecting itself into social justice issues. As their top stars explain, that time is now over.

In another development that stunned many in the sport, Wallace’s car, the venerable No. 43, carried “Black Lives Matter” wording and images in the June 10 race at Martinsville Speedway in Virginia. Petty, known as “The King,” is the sport’s most iconic figure and its all-time victory leader.

Earnhardt Jr., who was elected to the NASCAR Hall of Fame on June 17 and remains one of the most popular figures in international motorsports, has spoken out against the flag on numerous occasions, including in his 2001 book “Driver #8.” In a response to a fan question about the flag, he said it “represents closed-minded racist views that have no place in today’s society.”

Grant Lynch, who retired as president of the Talladega track last year after decades in executive positions in auto racing, said Saturday he hopes fan reaction to NASCAR’s flag decision “is not negative. I hope they understand why NASCAR is going in that direction.”

Lynch called the virus pandemic and recent social unrest “beyond anything I’ve ever seen in my life. I don’t claim to have any great ideas to help them out. I think it will just have to run its course. Hopefully, calmer minds will take over.”