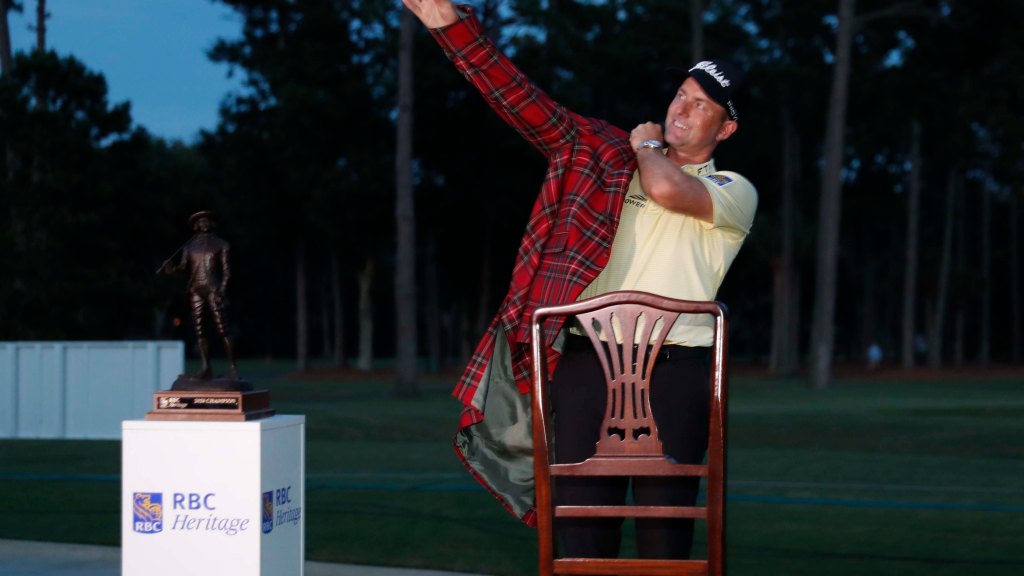 
HILTON HEAD ISLAND, S.C. – On Father’s Day in 2012, Webb Simpson was sitting with his pregnant wife, Dowd, who was expecting the couple’s second child, in a small, quiet room in the clubhouse at The Olympic Club in San Francisco when he saw on TV that he had won the U.S. Open.

Eight years later, Simpson, now a father of five, was in a slightly larger room in the Harbour Town clubhouse with his caddie, Paul Tesori, when he saw on TV that he won for the second time on Father’s Day.

Breaking out of a stampede of par-busting stars lighting up Harbour Town Golf Links in a race to beat the oncoming darkness, Simpson made five birdies in his final seven holes to win the RBC Heritage and slip the famous plaid jacket over his yellow golf shirt he was wearing to honor his father, Sam, who passed in 2017.

Simpson closed with a 7-under-par 64 to finish at a tournament scoring record 22-under-par 262 and one shot clear of Abraham Ancer (65). Two shots back in a tie for third were Tyrrell Hatton (66) and Daniel Berger (65), who won last week’s Charles Schwab Challenge in golf’s return after a 13-week break.

In a tie for fifth three shots back were Sergio Garcia (65) and Joaquin Niemann (65). Brooks Koepka earned his first top 10 since last year’s Tour Championship with a closing 65 to finish four back in seventh place.

Six players tied for eighth, including Dylan Frittelli, who shot 62, and Justin Thomas, who shot 63.

“U.S. Open on Father’s Day, I’ll never forget calling my dad after on the way to the press conference, and when he picked up the phone, he just was laughing. That’s kind of what he did when he was happy, he would just laugh. So I’m going to miss that laugh today for sure,” Simpson said. “But I thought a lot about him. This morning I thought about him, and when I was on the golf course, I thought about him. Yellow is his favorite color. My kids know that. Whenever they give me a card, it’s always in yellow crayon or yellow marker. So still feeling my dad all around me from memories. He loved golf. He would have loved watching today.”

Simpson, who also won The Players Championship on Mother’s Day in 2018, broke the previous scoring mark set by Brian Gay in 2009 by two shots. He won for the seventh time in his career and for the second time this season, as he toppled Tony Finau in a playoff to win the Waste Management Phoenix Open in February.

Simpson will move to No. 5 in the official world rankings.

The 2020 RBC Heritage at Harbour Town Golf Links finished just before it got dark. Photo by Brian Spurlock/USA TODAY Sports

While the tournament ended nearly in darkness because of a storm delay of 2 hours, 45 minutes, the day began under sun-drenched skies with Simpson in a four-way share of the lead and 21 players within three shots of the lead.

Simpson lost a bit of ground with just two birdies through his first 11 holes and then went ballistic with his putter, starting with a 10-footer for birdie on 12. He canned birdie putts of 22, 2 and 14 feet on three of his next four holes and earned his margin of victory with an 18-footer for birdie on the 17th hole.

“Honestly, the last kind of 10 holes were a blur because guys are making birdies, we’re trying to finish before night comes, and so to finish with five birdies like that was really special,” Simpson said. “I think it’s a good thing that guys were making birdies because they kind of forced me to be a little more aggressive and know that pars weren’t going to cut it.

“It’s typically not a golf course where you can force it, but today after the storm, it softened things out, not much wind, we could go attacking. Guys kept making birdies. I was blown away with the scores, but then I hit my run, 12 through 17, and ultimately that’s what made the difference.”

Ancer fell just shy of winning his first PGA Tour title. He burned the edges on more than a handful of birdie putts and his bid to force a playoff from 35 feet on the 72nd hole stop two feet short.

“Definitely a lot of positives,” Ancer said. “I probably had one of my best ball-striking weeks in my career. I gave myself a lot of chances. (Putts) will eventually go in in bunches, hopefully. Today there were some that I really thought they were going in and they just decided not to.

“Big props to Webb. He played amazing down the stretch.”