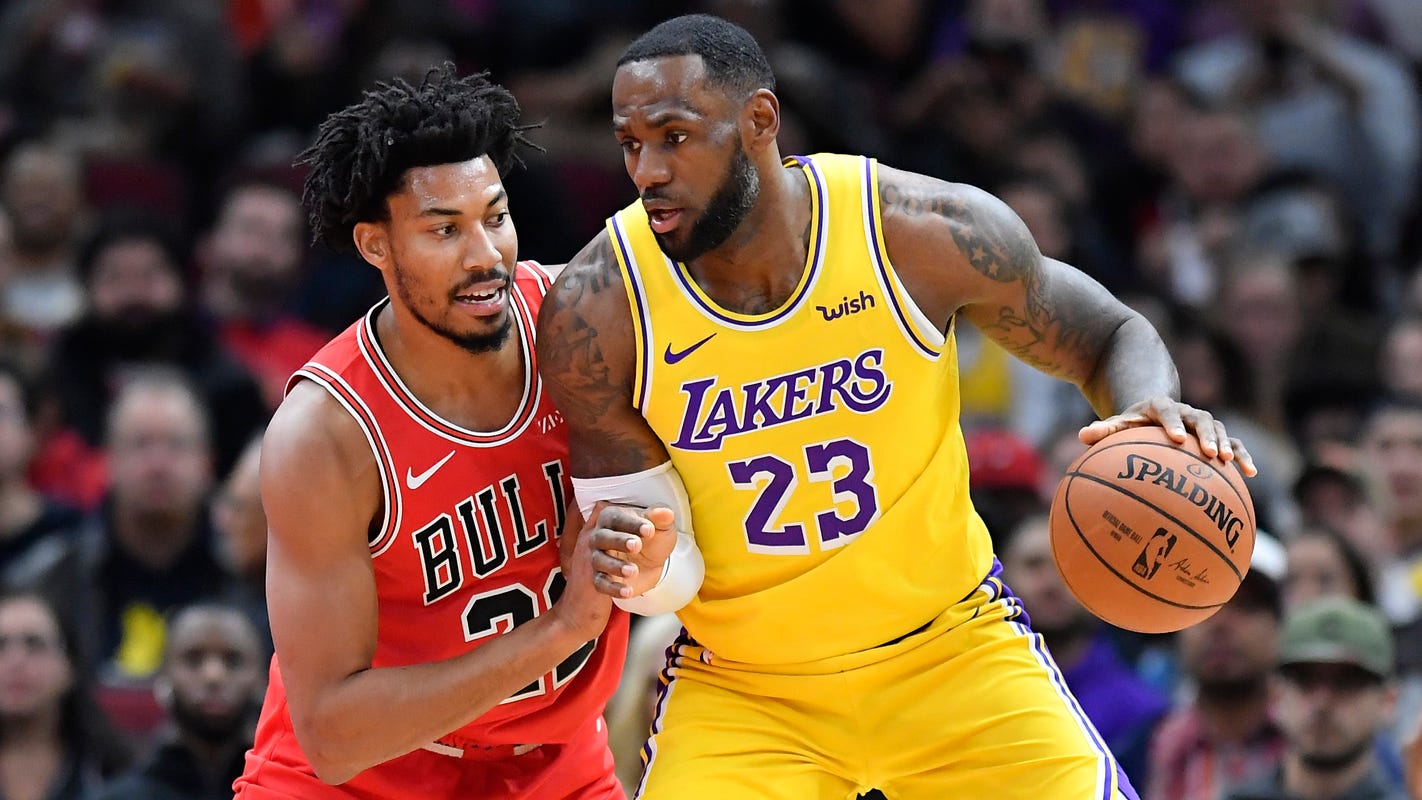 When the biggest news in sports is centered around a documentary about a team that played two decades ago, we’re hurting as fans. While the NBA deliberates how to conclude the 2019-20 season amid the coronavirus pandemic, let’s take a look at the fashion side of the league. Here are USA TODAY Sports’ power rankings of NBA jerseys.

1. Los Angeles Lakers. The purple and gold made famous during Magic Johnson’s “Showtime” championship teams still holds up with classic cursive writing and bold colors. While other teams sometimes seem like they’re trying too hard with graphics and images, the Lakers’ uniform is grounded in simplicity and bolstered by championship-level basketball.

2. Miami Heat. The Heat’s black-and-red away jersey stands out, but the white home jersey has a distinct look. Miami’s simple lettering with its signature T sporting a flame set the tone for other teams to copy. The team’s “Miami Vice” alternates are some of the best in NBA history.

3. Philadelphia 76ers. The Sixers have always had cool colors to work with, and the blue away jersey from the Allen Iverson era might stack up among the best ever. Now their signature blue unis, with stars and stripes across the side, showcase a solid blend of vintage and present-day style.

4. Golden State Warriors. At the turn of the millennium, the Warriors had one of the most obnoxious jerseys ever — sporting giant comic book bang! lettering. Much has changed during the Steph Curry championship era. Their alternate jersey has a clean look, even though there’s a lot going on with the Golden Gate Bridge in the circle logo.

The Lakers and Bulls have two of the most iconic looks in NBA history. (Photo: Quinn Harris, USA TODAY Sports)

5. Chicago Bulls. Maybe it’s because the franchise hasn’t made major changes since the Michael Jordan era. Or because Jordan is so iconic, any jersey he wore in the ’90s would have made us believe it’s a top-five design. Chicago’s red away jersey is on par with MJ’s personal Jumpman logo.

6. Portland Trail Blazers. The red and black stripe across the center of the jersey is the perfect splash to go with an iconic font.

7. Washington Wizards. The Wizards had a hideous jersey with ballooned lettering when Jordan played for the team, and those unis lasted way too long. Washington went back to a vintage look from its time as the Bullets, featuring red, white and blue stripes.

8. Toronto Raptors. Remember the dinosaur graphic Vince Carter sported in his rookie season? RIP. The franchise has drifted away from purple and capitalized on black and red for a much cleaner look.

9. Memphis Grizzlies. Another ’90s graphic jersey franchise (the Vancouver unis have reappeared as an alternate), the Grizzlies have simplified things and leveraged their powder blue and navy color combination.

10. Boston Celtics. Don’t mess with a legendary look. The only thing missing from the Celtics’ heyday in the ’80s? Larry Bird short-shorts.

11. New York Knicks. The uniform is one thing the franchise hasn’t screwed up in two-plus decades of losing. The classic colors and lettering are still a winning look.

12. Utah Jazz. Utah played the John Stockton and Karl Malone era with mountaintop unis but transitioned to a much cleaner variation of its vintage look from the ’70s, ’80s and ’90s.

13. San Antonio Spurs. The black and silver, with the signature U as a spur, is jersey greatness and is why there hasn’t been much of a rebrand in years while the franchise piled up championships in the early 2000s.

14. Milwaukee Bucks. Simple, yet refined. These jerseys are elegant with the trim and fierce when Giannis Antetokounmpo is throwing down dunks.

15. Charlotte Hornets. The turquoise and purple color scheme shouldn’t work, but it does because of white outlining for the team name and all-purple numbering.

16. Denver Nuggets. Similar to the Hornets, the Nuggets use the color scheme well but in reverse — outlining the away navy jersey in yellow and the numbering in white.

17. Indiana Pacers. We’re entering the trying-too-hard phase of the rankings, and Indiana earned this spot with its circle lettering and number in the middle.

18. New Orleans Pelicans. The blue side stripe on home jerseys and gold stripe on away jerseys is a nice touch. But considering all the Big Easy has to offer, creativity is missing on this too-plain look.

19. Orlando Magic. The pinstripes have a little too much old-school flavor, but they are synonymous with Shaquille O’Neal and Penny Hardaway in the ’90s. But the Magic need to pick between vintage and new-school because mixing isn’t really working here.

20. Oklahoma City Thunder. The franchise makes use of orange, teal and yellow, which isn’t easy, by relatively clean, outlined lettering.

21. Minnesota Timberwolves. The T’wolves’ unis have a nice color variation, but the dash above the lettering and numbering makes them resemble a flag.

22. Houston Rockets. Houston’s Nintendo-esque outline doesn’t quite cut it, although the black stripe on the away red unis is a nice touch.

23. Detroit Pistons. Detroit’s futuristic spin on the late ’80s and ’90s color themes worked for a year or two. Now they look ready for a redesign.

24. Los Angeles Clippers. The team has great red and blue colors, but its recent font, over a signature cursive from previous variations, looks like a Bazooka gum wrapper.

25. Sacramento Kings. The Kings’ classic look from the ’90s and early 2000s fit the team’s tone. Its current look has a bizarre Pac-man feel.

26. Phoenix Suns. The franchise’s ’90s Charles Barkley-era unis are top-notch. What’s happened? Similar to the team’s disarray on the floor, the design department keeps going back to the drawing board.

27. Brooklyn Nets. Still a franchise trying to establish its identity, the Nets aren’t quite there yet with the basic black and white.

28. Dallas Mavericks. The Mavs’ home and away unis are like the generic version of what the Dallas Cowboys have to offer. They’re the RC Cola and Dr. Dazzle to the Cowboys’ Pepsi and Dr. Pepper.

29. Atlanta Hawks. The franchise’s use of neon green and yellow accents and a lightly checkered backdrop isn’t working. At all.

30. Cleveland Cavaliers. Maroon is a difficult color to work with. But the Cavs don’t do themselves any favors with YMCA-like outlines for home unis and a giant “C” for the main away jersey.