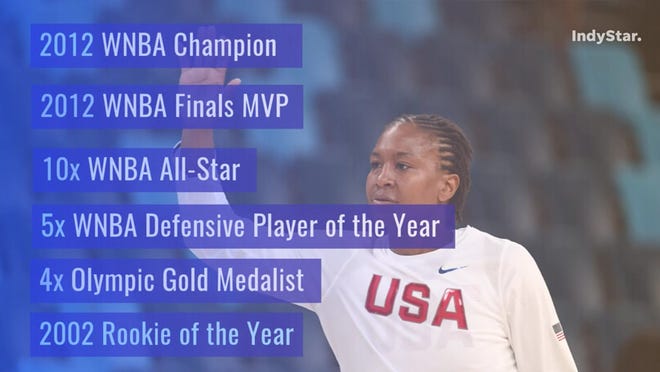 
INDIANAPOLIS – Nothing can dampen this moment for Tamika Catchings. She’ll share induction into the Naismith Memorial Basketball Hall of Fame with Kobe Bryant and Pat Summitt, but neither will physically be there with her come August.

“Kobe is the headliner of it all,” said Catchings, who shared the same dreams as the L.A. Lakers great as child while both players’ fathers were in the NBA and Italy. “I don’t feel sadness. I feel happiness. I know he’s looking down on us with a big smile on his face.”

Summitt, the only other figure from the dominant Tennessee Lady Vols in the Hall, recruited Catchings where she played from 1997-2001 and helped shape that fearlessness into all-time greatness.

Catchings can see Summitt’s smile, feel the warmth from Summitt’s arm draped around her and hear Summitt’s soothing Southern drawl: “Catch, I’m just so proud of you.”

Summit died in 2016 from early-onset Alzheimer’s. Bryant died Jan. 26 in a helicopter crash with his daughter, Gigi, before seeing their vision to the end as kids who grew up to be elite and champions and spent their entire careers with one franchise.

Catchings, who played for the Indiana Fever from 2002-16, is now general manager and vice president of basketball operations with the franchise. One of nine inductees named, she won four Olympic gold medals for Team USA, a national championship at Tennessee, a WNBA title and has amassed countless statistical records, MVPs, All-Star game appearances, All-WNBA team and All-Defensive team selections in-between.

This, however, is the pinnacle.

OPINION:Kobe deserved to give a memorable Hall of Fame speech

IN-DEPTH:Tamika Catchings got everything she wanted — almost

“When you look at the Hall of Fame, this is at the end of your career,” Catchings said.  “There’s no turning back. This is the end. The storybook ending and all of the other things you accomplished along the way, it’s just a great ending. It’s awesome.”

While she still was good enough to continue playing, Catchings, 40, isn’t going to miss the cold tubs.

The work ethic that defined Bryant and Summit, a trait that made them great, doesn’t dissipate just because Catchings is done playing.

That mentality, some might even call it a Mamba Mentality, remains. She credits the 2004 Olympics experience and being around Dawn Staley, a fellow Hall of Famer and coach at South Carolina, with helping her grow as a leader.

At Tennessee, Summitt ran practices among her players that often were tougher and more competitive than their next opponent.

“Every single practice there was blood. It was because we worked that hard,” Catchings said.

There was an open-door policy that Summitt had with her players that Catchings will bring to her front-office role with the Fever.

Of all her accomplishments, Catchings will always go back to what she’s done off the court. She began her Catch The Stars foundation while she was still active as a player. That’s another parallel she shared with Bryant who was fully engaged in Mamba Sports Academy, specifically girls basketball.

The excuses were there for Catchings to give up early. She had impaired speech and was diagnosed with a hearing disability at 3 and felt ashamed. It wasn’t until she got to Tennessee, however, that she embraced those parts of her life that made her unique.

She worked. Her other senses improved. She improved.

Catchings knew she was equal to everyone else off the court. She just had few equals on it.

Still, when she received the phone call that she would be enshrined, it was a surprise. She had to remember to keep her hands on the steering wheel while driving.

Fellow inductees Kim Mulkey and Rudy Tomajanovich didn’t make it when they were first eligible.

“I did not expect it,” Catchings said of a class that includes Kevin Garnett, Tim Duncan, Eddie Sutton, Barbara Stevens and Patrick Bauman.

There’s a lot of work left to do for the “adoptive Hoosier,” with the Fever and helping others in the community she’s grown to love.

She’s not winding down. She’s winding up.

She’s not in cruise control. She’s going full-speed ahead.

It’s how she has excelled at every phase of her life and career in the first place.

“How relentless I was in every aspect of life,” Catchings said about how she wants to be remembered. “The way I’m on the court is the same way I’m off the court. If I can’t go 100 percent more than likely I’m not going to do it.”

The results speak for themselves.