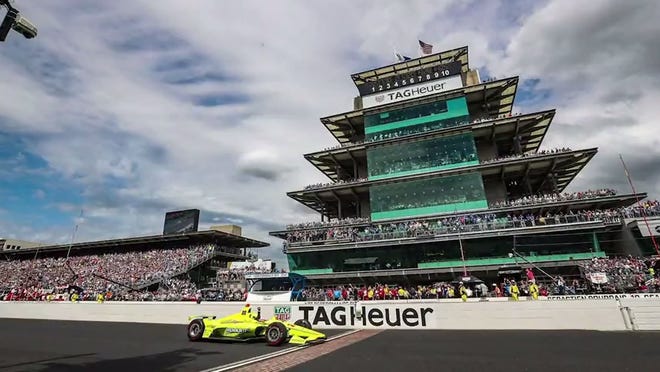 
INDIANAPOLIS – Using a modified wheel and sitting in his basement, the same old energized, aggressive Robert Wickens is still there. But with a team of engineers in his ear, along with his own ingenuity and yearning for a competitive edge, there’s a cunning there, too.

None of that has left the 31-year-old Canadian since his last IndyCar race, during his 2018 rookie season, when a horrific crash left him paralyzed and put his heralded young racing career on pause — some thought forever. But through unique circumstances, Wickens has found his way back to the grid.

Now, it’s all about balancing and fine-tuning those instincts that made him a series championship contender almost instantly.

And Saturday was “Step 1,” according to Wickens, of what he hopes is a monumental career comeback. After starting 29th (last), he finished eighth in IndyCar’s iRacing event on the virtual Barber Motorsports Park layout. The ultimate goal: hopping into the cockpit of his Arrow McLaren SP machine under the sunshine of a Sunday afternoon race.

“My return to IndyCar was exactly how I imagined it, in my basement – no, I’m kidding,” joked the elated Wickens from his home post-race Saturday afternoon. “It was a ride. It felt, in a way, like the real thing.”

Battling a somewhat awkward steering wheel maneuver in one of Barber’s  hairpin turns for 45 laps and running a massive fuel-saving plan, Wickens moved into the top 20 after just eight laps before taking third on Lap 25. He survived a pair of accidents in the final 15 laps — neither his fault. All in all,  Wickens considers the result  plenty successful.

“I think it went extraordinarily well. To be honest, I picked it up much quicker than I was expecting to,” Wickens told IndyStar. “My whole strategy the whole race was to just keep my nose clean and try to be there at the end. We didn’t do a perfect job at it, but we still got there at the end.

After taking the pole and leading for much of that race, Wickens was taken out by Alexander Rossi in the final restart and finished 18th.

“To come back, albeit through a virtual race, and finish in the top 10, it feels pretty cool. It’s pretty encouraging what the future might hold,” he said.

Even what Wickens could control didn’t go entirely to plan Saturday. During his qualifying run, he found himself flying into the final turn just seconds from throwing down the fastest one-lap time he’d turned since SimCraft  had set up his rig Thursday afternoon. (Even on Turn 5, his problem area,  he lost little time to the rest of the field.)

Prepared to register a top-10 time, Wickens spun on the final corner.

“Me being the uber-competitive person I am, instead of being happy where I was, I tried to push it a little bit more there,” he said. “And I spun and lost everything.

“For whatever reason, I thought if I did this miracle lap, I would crack the top 10, which would have been really cool. I don’t know if I wanted the headlines or, I don’t know what went through my head, but I should have just relaxed and put in still a good lap time, but I tried to be the hero and ended up being a zero.”

That mistake solidified his team’s race strategy, which Wickens only formulated Saturday morning after a conversation with Andretti Autosport driver Scott Speed. Wickens showered the entire paddock with praise post-race for effective tips he received after taking the seat Thursday afternoon. From iRacing enthusiasts Felix Rosenqvist and Sage Karam to the rest of the group, Wickens was impressed at the level of openness each driver showed, both privately with him and publicly in group chats.

Among a group that would typically keep everything close-to-the-vest, Wickens said hardly anyone kept anything, beyond overarching race strategy, to themselves.

“I think it’s because it’s all relatively pressure-free racing. It brings everyone back to driving because we enjoy it. There isn’t much at stake,” he said. “Everyone’s talking about what they’re doing in this or that corner.

“I was joking earlier I need to thank all my driver coaches, which is probably about 19 different drivers that were all giving me advice on what to do.”

NASCAR: Bristol iRacing event will be a big test for drivers

Speed planted a seed that Wickens’ team hadn’t thought of and ended up paying dividends. In the 45-lap race, drivers only needed to pit once – though some favored going twice like race-winner Scott McLaughlin and a handful of others.

Wickens’ team decided to pit during the Lap 15 competition caution, allowing him to move up the grid when many competitors pitted under green around Lap 25. Even before then, Wickens found himself in 10th, but he jumped to third place and found himself clear of the traffic that hindered  Karam, Rosenqvist and others. Karam, who won IndyCar’s first iRacing event, was knocked out of the race early.

With just one stop, Wickens had to drive cautiously. Without a competitive pace to challenge for a race victory,  Wickens’ team decided the time he’d lose by driving a hair less than full-bore was less than a 28-second pit stop.

That provided a secret advantage that, in a way, saved Wickens from himself.

“I tried it in practice, and I was actually at almost the same speed trying to save fuel than when I was pushing, because when I was saving fuel, I was able to be a lot more consistent in my lap times,” he said. “And we made it to the finish line with 0.02 gallons of fuel left. It was good teamwork, great job by the Arrow McLaren SP guys.

“But overall, I’m just excited. I think it was a good day.”