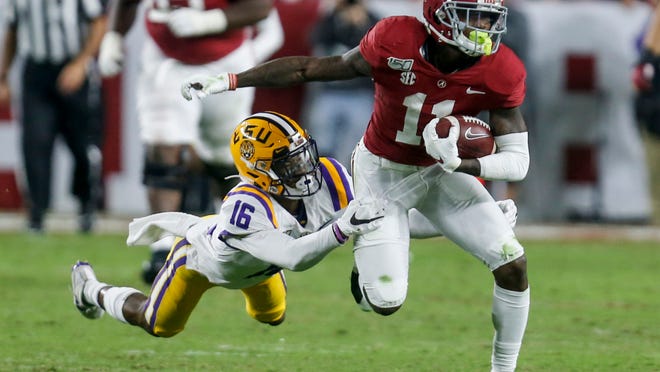 But that seems to be about the extent of the football comparison when it comes to the former LSU tight end and his dad, who was recently appointed to the NFL’s all-century team as a wide receiver.

The contrast was perfectly apparently Tuesday at the league’s annual scouting combine when Thaddeus Moss was asked if he’d rather catch a pass for a first down or spring a teammate to glory.

“Absolutely, I’d rather block. I took pride in that all year,” said Moss, willingly engaging with reporters in a manner his father rarely did later in his 14-year career.

“All the receivers always ask me in the offseason, ‘How many catches you gonna have? How many touchdowns you gonna have?’ And I was like, ‘Look, man, I don’t care about catches. Y’all can have as many as y’all want. I’m a tight end, I’m not a receiver. I’ll do the dirty work, and y’all go score touchdowns, do y’all’s little dances and stuff. I’ll go block.’ “

STAY IN THE GAME:Get biggest NFL news all offseason delivered to your inbox. Sign up here

Not exactly “Straight cash, homey” swagger. Yet it reveals that Moss – who, at 6-2 and 250 pounds, doesn’t have the game-breaking build or speed of his freakishly athletic father – knows where his bread may be buttered in the pros.

“I love blocking,” he said. “I love the physicality of football.”

Which isn’t to say he won’t be a valuable receiver in the NFL. Moss was adept at exploiting holes in zone coverage, racking up 47 catches for 570 yards in 2019, his only season on the field for the Tigers after transferring from North Carolina State following the 2016 season and sitting out 2018 with a foot injury.

Moss may also have the penchant for the big play. He scored four touchdowns during LSU’s run to the national championship, one coming in the college football playoff semifinal thrashing of Oklahoma and two more occurring in the title game defeat of Clemson.

He tries to incorporate skills from Antonio Gates, Rob Gronkowski, Jason Witten and George Kittle into his game while putting “my own twist on it.”

And after watching Kittle and Travis Kelce in the final game of the NFL’s 100th season, Moss also understands his position appears to be increasingly valuable.

“These past two teams in the Super Bowl had the two best tight ends in the NFL,” he said, referring to the Chiefs and 49ers.

Still recovering from LSU’s 15-game season, Moss will not work out at the combine, choosing to save himself for the school’s April 3 pro day … not that he’s worried the delay will hurt his stock.

“There’s nothing to hide,” he said.

Yet he may have to temper expectations even in what appears to be a pedestrian tight end draft class.

“Moss lacks the elite straight-line speed and height which made his father one of the most unique talents at wide receiver in NFL history,” longtime NFL draft analyst Rob Rang told USA TODAY Sports.

“But it doesn’t take long to see professional qualities … including savvy as a route-runner, reliability as a pass-catcher and surprising physicality and competitiveness as a blocker. Moss projects as a Jordan Reed-like matchup monster whose relative readiness for the NFL belies his starting experience.”

He’s also got a pretty good mentor in his corner and doesn’t tire of being referred to as Randy Moss’ son.

BURROW A BENGAL?:Joe Burrow opted not to throw wrench into NFL draft system

“I’ve been dealing with it for 21 years. It comes with (the territory). I’m so appreciative for him,” Thaddeus Moss said of his father, for whom he did the Hall of Fame introduction at Randy’s induction in 2018.

“He faced a lot of adversity throughout his career, growing up. It opened a lot of pathways and a lot of doors for me. I’m forever grateful for it. The questions will never get old. To be honest, I actually like talking about it. Not a lot of people get to talk about their dad being a Hall of Famer.”