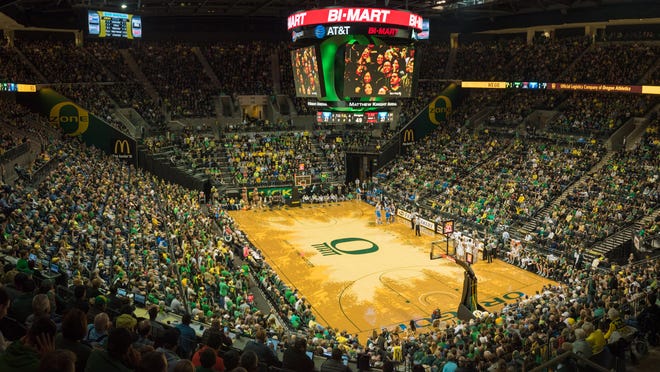 
College basketball court designs are trending towards geography. The University of Massachusetts unveiled its new design at the start of the 2019-20 season, and the entire state map of Massachusetts is largely displayed across the court with the signature UMass logo sketched on top through the middle. Even Martha’s Vineyard is drawn onto the playing surface.

“The unique thing about men’s and women’s basketball is that the NCAA bylaws allow you to be more creative than football fields,” said Alan Pandiani, UMass’ associate athletics director for external operations. “The genesis of our court change came from us really wanting to tie in the state pride with the love of a basketball program. The reception this season has been fantastic.”

UMass, Nebraska and West Virginia are among a dozen schools to redesign in 2019, opting for a bigger look by adding giant silhouettes of their state outlines across center court. The sport’s trend for bold court designs can be traced to nearly a decade ago when the University of Oregon had legendary Nike designer Tinker Hatfield create a court meant to be an “iconic television presence” for the university. Tabbed “Deep in the Woods,” the design features silhouettes of the Pacific Northwest tree lines — as if student-athletes are lost in a nearby forest.

NEVER MISS A MOMENT:Get top news and best analysis delivered to your inbox. Sign up here

Universities have followed that creative blueprint to incorporate a city’s culture or accentuate a school’s feature — which is oftentimes being the premier university in the state.

For some schools, culture and proximity are key. Florida International’s court is a beach painting with waves across one sideline and a sandy color throughout the playing surface. Colorado’s court has mountains on it. George Washington’s court has the Capital building, the White House and the Washington Monument. Washington State has the Seattle Space Needle in its design. Florida Atlantic features palm trees and the words, “1.8 mile from the beach” and “winning in paradise.”

“In athletics recruiting and campus recruiting, a university’s goal is to sell its strengths and increase enrollment,” said Florida Atlantic athletic director Brian White. “I won’t lie; we did look at what other schools had done. For us, obviously we have a paradise theme with the palm trees.We want anyone watching at home to know what’s unique about our campus.”

LATEST BRACKETOLOGY:Who missed out on taking over a No. 1 seed?

“We really tried to make an effort to look into the relationship of UIC with the city of Chicago,” said UIC senior associate athletics director Dan Yopchick. “Our goal in some ways is, ‘How can we capture the casual fan and make a bit of a splash on the national scene.’”

Universities see bold court designs as a cost-effective advertisement to prospective students when college basketball games are televised for over an hour. They also see it as a way to appease donors who are invested — literally — in the program. According to marketing strategist Maddie Stoehr, who helps the Cincinnati-based floor painting manufacturing company Robbins grow its brand, a court design update for a major university costs between $40,000 to $200,000. By contrast, 30 seconds of air time for an ESPN television commercial costs a university around $20,000. .

“It’s free advertising — to have millions of viewers see top athletes performing on a court,” Stoehr said. “We try to encourage universities to stand out as much as possible, something that will pop and look good on screen, while also getting the community excited in person. A lot of universities take a big sense of pride in people walking into the stadium and seeing the mascot or big (cultural) symbol, getting hyped.”

Some schools keep their designs mascot-driven. Notre Dame has a giant clover at center court (ahem, the Fighting Irish). The University of Texas at El Paso (UTEP) has a gigantic pickaxe across its floor to accentuate the Miners’ presence. St. Joe’s has a hawk silhouette that encompasses more than half the court. Northern Kentucky athletics director Ken Bothof said in 2015 of his university’s new large ship watermark drawn across its court: “The Norse ship rising through the sea is meant to serve as a metaphor for the uprising of Northern Kentucky athletics.”

Color also takes precedence. Cal-State Bakersfield sports a court that’s all royal blue — taking a page from Boise State’s blue football field playbook. Memphis’ court was updated to be largely shaded blue prior to 2019-20. The University of Oakland’s court features a blacktop shaded design that emulates an outdoor court. It also features a giant Grizzly logo drawn over the state of Michigan map.

What goes into the decision making of an eye-popping court design? Most schools are graphic designing in-house with their marketing departments. Once the design is created, then putting it onto the hardwood is a different matter. Both Nebraska and the University of Illinois Chicago outsourced their court designs to Robbins Floor, which holds offices in the Midwest. Robbins is among a handful of manufacturing companies that specialize in court designing. “It’s definitely a niche market,” Stoehr, the marketing strategist, said.

Robbins, which has done court designs for Creighton, Georgetown, Texas, Tennessee and a handful of NBA teams, including the Los Angeles Lakers, will often collaborate with dealer companies (similar to car manufacturers’ relationships with car dealers) to help the courts get on the floor. Game Time Wraps in Little Rock, Arkansas, is one company that specializes in vinyl graphics application and is becoming increasingly popular to universities. It can help get a court design done in less than 24 hours — a job that otherwise might take several weeks.

The NCAA does have some limitations. UMass, for instance, wasn’t allowed to paint a hashtag across its court. Universities also have to weigh if they’re affecting the nostalgia of a previous court. UMass’ court had a tie-in for fans from when John Calipari coached there in the 1990s. Murray State dealt with that dilemma by auctioning off pieces of its old court to fans and donors when it changed this offseason after 10 years.

Of course, bold court designs can backfire. Such was the case for Memphis at the beginning of the 2019-20 season. The Tigers program, which shares the FedEx Forum surface with the Memphis Grizzlies, was forced to change its newly-designed men’s court after social media backlash surfaced on its debut at Memphis Madness. Fans compared the court’s design of lane lines to having a blue male genitalia on each end. The court has since been updated with the lanes that are no longer shaded blue. Before that update, Memphis’ court had the Hernando de Soto Bridge drawn across a portion of the court as a result of a fan vote.

Central Florida had one of the more unique court designs in the country in 2017 and 2018 with roller coasters painted onto the court to tie in the school’s proximity to Disney World (36 miles). But this year the athletic department went for a more simplistic look when the court was redone. The UCF coaching staff provided input, noting players could confuse the 3-point line near the theme park.

San Jose State previously had five huge Spartans with shields displayed across one sideline before changing the court in recent years. Louisiana-Lafayette also reversed course. Marketing director Courtney Jeffries designed the state’s Cypress Lake sketched all across the court of the Cajundome. The school outsourced to Chattanooga, Tennessee.-based Raters Hardwoods for the floor. But at the beginning of 2019-20, the school decided to return to a more “traditional design.”

Nebraska did its best to incorporate its fanbase in making a more conservative court decision. (In other words, if the court backfired, it was on the fans). The university held a social media poll that featured 40,000 votes between four potential court designs. The court that won the fans’ vote is the one that was showcased in 2019-20 and was paid for by the city. North Texas also held a fan vote for its 2019-20 court, with its new design featuring a gigantic Eagle mascot over the Texas state outline with orange shading inside the three-point arcs.

“What we did is we looked at what we’ve done in the past and what would resonate most with fans,” said Meier of Nebraska’s new court. “Ultimately, we consulted with our men’s basketball team and they let us know that the more paint, the more scuffed up the court gets. So we wanted a clean look because of that feedback. We wanted to stay a little more traditional and not go too crazy.”