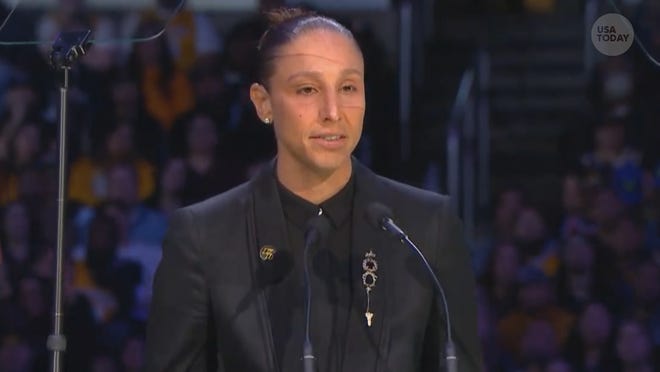 Auriemma stood on stage to commemorate Kobe and Gianna Bryant, who were among the nine people that died in a helicopter crash nearly a month ago. So after speaking for nearly 10 minutes, Auriemma could not help but notice all who listened attentively.

“An incredible amount of talent in this room,” Auriemma said. “Maybe the greatest collection of talent that I’ve ever been around.”

Maybe the greatest collection of basketball talent ever. Monday’s memorial for Kobe and Gianna Bryant at Staples Center was a who’s who of the basketball universe.

Who else was in the crowd?

In addition, there were active NBA players there who were scheduled to play in games Monday evening.

For members of the Clippers, it was an easy commute as they are hosting the Memphis Grizzlies at 10:30 p.m. ET at Staples Center. But James Harden and Russell Westbrook were expected to make it back to Houston for the Rockets’ 8 p.m. ET game vs. the New York Knicks. And Devin Booker of the Phoenix Suns has a game scheduled for 9 p.m. ET in Utah.

Plus, Ionescu, plays for the University of Oregon, was scheduled to fly to Palo Alto for Oregon’s game against Stanford at 9 p.m. ET.

It is not immediately clear how the Lakers and AEG planned the event together and compiled the list. But the Lakers collaborated with Vanessa Bryant, who wanted to keep the event as private as could be possible. Staples Center and Lakers officials also urged fans without a ticket to stay away from L.A. Live to minimize the congestion outside the arena.